12/1/2022: The Cottage School Cougars played host to the Howard Hawks in their first contest of two during the season. Down ten at halftime, TCS turned it around after the intermission break and won 53-43.

A much-improved 2022 Howard team came into Roswell with positive and aggressive energy. They controlled the first half tempo and held a 27-17 lead at the break. Coach Briggs spoke at halftime, “We just need to get back to moving without the ball and will be fine. Credit Howards’ energy, they came to play tonight. We are lucky to only be down ten. When we get our timing back Suroy, and I are confident the boys will make a run.” A run is an understatement!

Cottage came out a completely different team the third stanza. They executed well and got back to swinging the ball around and in the paint. Defensively the Hawks had trouble finding efficient shots and TCS won the quarter 16-4 to take their first lead of the game 33-31. Weston Kershner hit back-to-back three pointers late in this frame to tie it at 27 apiece.

The Cougars continued to build on the lead going ahead 46-33 by the end of the period, which all but put Howard away. A well-coached Hawks team never gave up and made a small run to end the game, but Cottage had already done the damage protecting home court with the 53-43 win.

TCS remains undefeated in AAC competition at 4-0 and are 5-2 overall. Tomorrow night they will play a good AAA GIAA Cristo Rey team at 6:30 PM here at home.

Jackson Barnes corralled another double-double with 13 points and 11 rebounds.

Weston Kershner moved the ball well and played strong defensively. He was rewarded with those two big bombs from beyond the arch for 6 points. 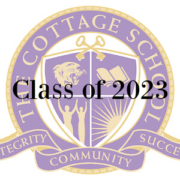