Senior Toby Nwokedi threw one deep into the sectors yesterday, defeating all-comers from the likes of GHSA Juggernauts Parkview, et al, to climb atop the podium for his Gold Medal.  Subsequently, Toby shattered a TCS record in the process.  Toby threw the discus 111’ 10” eclipsing Morgan Pollard’s 108’ from 2007.  No student at The Cottage School has ever thrown farther. 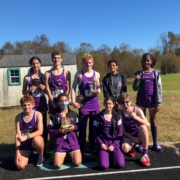