The Cottage School Soccer Cougars bounced back from a tough defeat on Wednesday to best AAC rival Mill Springs Academy on Friday in Alpharetta. The Cougars started slowly but roared to life in the second half to maintain first place in the AAC and build momentum heading into the final week of the regular season.

The Cougars narrowly avoided a nightmarish start to the contest after a Mustang goal was ruled out for offsides within the first 45 seconds. Breathing a collective sigh of relief, the Cougars refocused and started to assert themselves offensively. TCS dominated possession throughout the match. Though it took a while for the Cougars to find the opening goal, they created several good scoring chances in the first few minutes. Ruslan van Kesteren, Gabe Belden, Liam Walsh, Nick Rice, Sam Bayer, and Blake Lackey all combined to put immense pressure on the Mustang defense as midfielder Daniel Byman orchestrated the TCS attack. The first TCS goal was scored by Byman, who finished past the keeper into the bottom of the net from the top of the box. The Mustangs responded quickly, scoring a goal of their own following a TCS defensive lapse. The TCS defense refocused and shut the Mustangs out for the remainder of the match. Elijah Joiner, Alex Hogg, Charlie Kish, Anika Helm, Kyle Kimble, Nick Smith, Braden Kramer, and Nick Elliott all contributed to the defensive effort and frustrated the Mustang attack. Goalie Aidan Briggs did not see a ton of action as the Mustangs’ attacking opportunities were few and far between.

The Cougars tacked on two more goals before the half ended. Liam Walsh put the Cougars back into the lead when he neatly finished a cross from Daniel Byman. Byman then added a second goal of his own just a few minutes before half time, extending the Cougar lead to 3-1 at the break.

The Cougars began the second half with a flurry of attacking opportunities and quickly put the game out of reach. Byman completed his hat trick with another calm finish off of a throw in and assist by Gabe Belden. Ruslan van Kesteren then dribbled through the Mustang defense and set up Camden Michaud for a simple finish. Michael Coryer, Jack McGrew, Alex Yager, Lillian Travis, and Schuyler Nebel all provided essential energy off the bench, keeping the Mustang defense on their heels and the Mustang attack at bay. Defender Braden Kramer got in on the scoring action, finishing with a low shot into the bottom corner of the net and Daniel Byman added a fourth goal to bring the Cougar total to 7.

The Cougars would like to thank all parents, students, teachers and faculty, and alumni that came out to support us on Friday. Though we were on the road, it truly felt like a home game! We play our final GISA match of the regular season at home on Tuesday, April 20th vs Creekside Christian. We then return to Mill Springs for the AAC Championship on Thursday, April 22nd. 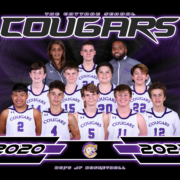