2/1/22 & 2/4/22: The Cottage School Cougars traveled to Furtah Preparatory School on Tuesday and Solid Rock Academy on Friday in between their run for their eighth AAC crown. After Friday’s game it was their 11th contest in just 17 days. They made it through this grueling part of the schedule without injury and despite dead legs did give hundred percent effort on the defensive end of the floor to win the AAC and compete with two of the top teams in the state.

The Furtah Falcons are currently ranked #7 in the state and the Lions of Solid Rock are the defending GISA champions and still ranked #1. While neither game had a close final score, the Cougars did have about two quarters of quality basketball versus these two highly talented squads.

Matter of fact, in the Solid Rock game the Cougars were down just 8-6 after the first six minutes of the first period. Later in the second quarter TCS were down 18-11. The Cougars only had 8 turnovers in the first half and 22 for the game, which was great progress. In their first contest the Cougars turned the ball over a record 48 times!

Aidan Briggs only played 14 minutes versus Solid Rock and struggled to hit a shot. He finished with 8 rebounds, 2 steals, a charge taken, and 3 points. Against Furtah he scored 14 points with 5 boards.

Alex Hogg recorded 9 boards with 4 points, and 2 blocks versus SRA. Versus FPS he struggled with a basket and 3 rebounds.

Daniel Byman grabbed 4 boards, had 4 assists, and 2 steals against the Lions. 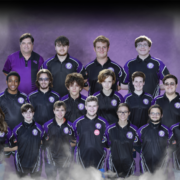 TCS eSports Team are the AAC Champions!
Scroll to top