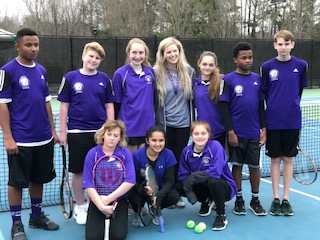 As we all know our weather has been far from pleasant, but yesterday was such a lovely day-especially for our first tennis match!

With a tennis team consisting mostly of middle schoolers, quite a few had their first ever tennis matches yesterday. So to say they were nervous was an understatement. 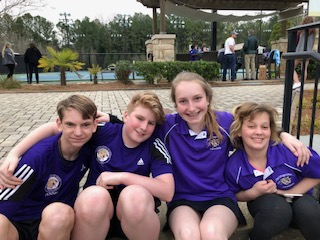 Lifetime Tennis Center had quite the spread for us to start our matches off with 6 courts, playing 1st, 2nd, 3rd, 4th boys singles and 1st and 2nd girls singles. 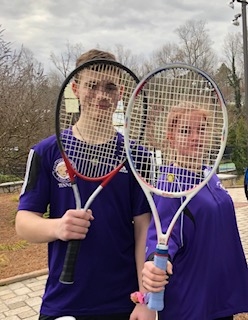 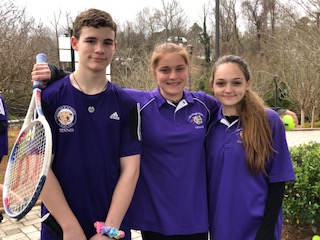 Dorsey served with such force, most serves were not returned. He hustled and kept consistent, hard hitting rallies.  But, the opponent took the win away 0-8.

A match that saw two first-time players. Jack’s consistency  and speed allowed him to jump to a quick lead. His opponent began to gain some momentum but Jack was able to stay levelheaded and pull out the win 8-4

With a last-minute scheduling change Grant jumped into his first singles match and was able to remain steady throughout.  He had some unbelievable put away shots and cruised to an easy win 8-1.

With a last-minute scheduling as well for Liam, he jumped into a first ever singles match with calmness and ease. Liam had some great points and good rallies but came up short to a little powerhouse player. Great sportsmanship from both sides of the net! 2-8.

What an on the edge of your seat match these boys had. Justin and Andrew started with a lead, but the William & Reed solid duo started to make a comeback with effortless net game shots. With focus and uplifting, Andrew served powerfully to gain on the opponent 8-7. The next game would either give TCS a win, or then have a tie which would then issue a tie breaker. Zeroed in Justin and Andrew communicated and put away shots incredibly. Andrew hit rallies low and in control and Justin hustled to put away shots to make the opponent hustle. Winning 9-7. 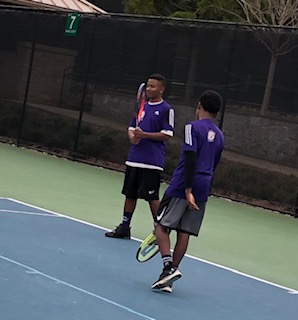 After starting the set down 0-2, Jack and Liam were able to settle down and focus on taking one game at a time. Solid serving from Jack and consistent volleying from Liam, their communication and team work helped secure the 1st boy’s doubles line for the season. 8-5. 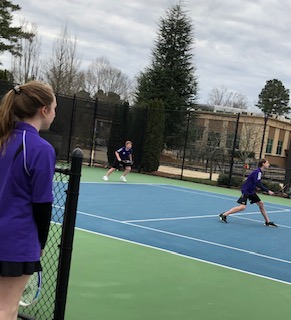 Natalie with passion and drive kept a long singles match going, not giving in and giving it her all despite her sickness creeping back up and hard shots from her opponent. Natalie put away and hustled on the court. With every game going back and forth from deuce to add in and add out, Natalie made her opponent work, but William & Reed put away a win of 2-8.

With nerves and uneasiness Esther took the court with a smile and represented TCS so well. She hustled to shots and gave it her all, but came up short to a hard hitter losing 0-8.

Channeling her focus Katie started with serves that were untouched by the opponent. Katie hustled to every shot and hit back with such put-away force. She glided into a win of 8-0.

Both Maggie and Grace new to doubles, communicated so well and worked together as a team. William & Reed were amazing in helping guide in scoring and ball calls. Maggie with a powerhouse, consistent serve, served some shots that were untouchable. Grace, dominating at the net was always there waiting, ready to put away the ball. Maggie and Grace lost 0-8, but had amazing sportsmanship. 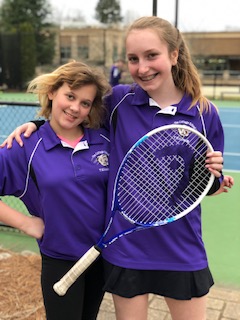 Bella Scaff/Natalia Hoeve didn’t get the opportunity to play because William & Reed didn’t have a full girls’ team. But, they cheered on every single match and congratulated both teams. Their cheering was crucial to our players, especially since over half had never played a match before!

One proud new TCS coach to a growing tennis team!