After the monsoons and plenty of practice in the indoor practice facility, your young but courageous Cougars took the field, albeit, two weeks behind schedule, yesterday.  The Cougars faced perennial GISA baseball powerhouse LaGrange Academy from, you guessed it, LaGrange, Ga.  Last year’s contest saw these Cougars declawed by their hosts in LaGrangeville.  So much so that the best thing that happened that day was dinner at McDonald’s on the way back.  This year’s squad was determined not to let that happen. 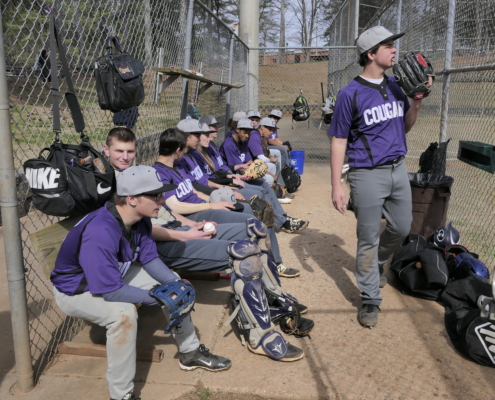 The game played at the Cougar’s Den, commonly known as RAP field #3, before a packed, standing room only crowd.  (Some stood because they did not bring a chair in which to sit.)  Right hander Junior Shane Hendrickson took the pill to the hill for his first start of the season.  The action began quickly as the first batter sent a seeing eye double into right center field on the first pitch of the season.  The Junior then settled down and promptly struck out the next two batters on six pitches and then enticed the fourth batter of the frame to bounce to Senior Alex Hoeve who calmly fielded the ball and touched first base for the final out of the top of the first inning.  Score: TCS 0 and the visitors 0.

In the bottom of the inning after a leadoff out, Newcomer, Junior Shortstop Seth Goldberg got on first base and then advanced by a walk by Hendrickson.  Both Goldberg and Hendrickson advanced on another walk by Senior Catcher Brett Boyles to load the bases.  This brought Junior Right Fielder D.J. Donaldson to the plate who patiently coaxed a walk bringing in the first run of the season as the walk also forced in Goldberg from third base.  The next batter was Senior First Baseman Alex Hoeve.  Hoeve, who began to come on strong last year with the war club pounced on the second pitch he saw sending a line drive to right center field clearing the bases and ending up on third base for his first triple of his career.  Freshman Aidan Briggs then stepped up to the plate for his first ever at bat and produce his first ever RBI by grounding into a 6-3 out driving in Hoeve from third base.  A strike out ended the first inning.  After one complete inning of play, TCS 5, The orange and blue clad visitors 0. 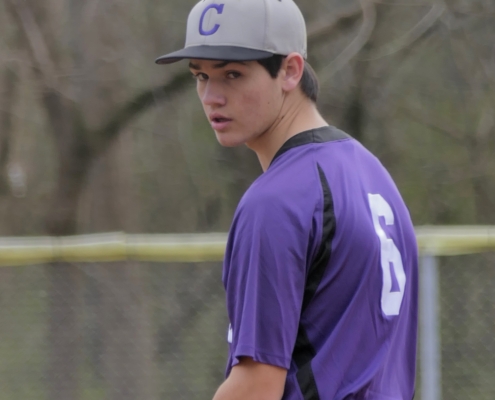 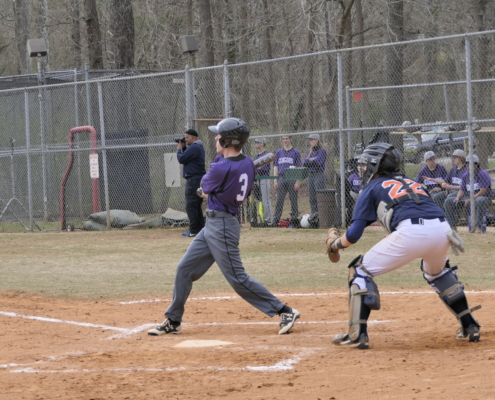 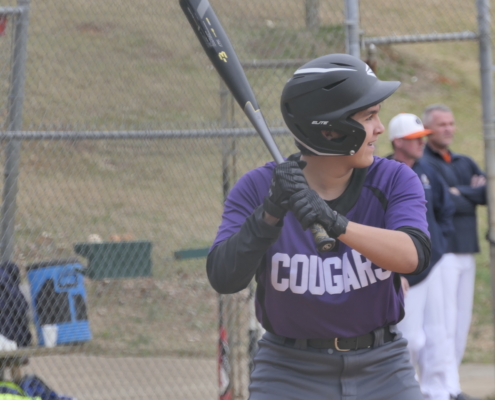 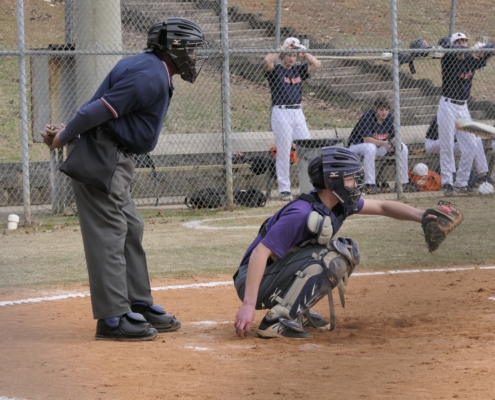 The first batter of the second inning walked and advanced to second on a steal.  Hendrickson then took matters into in hands, I mean, arm, as he then struck out the next three batters on only nine pitches.  This left the score TCS 5, the other guys 0.

The bottom of the second inning did not produce any runs leaving the score 5-0.

The third inning was not the best for our visitors as the first batter bounced into a 6-3 put out as Junior Shortstop Seth Goldberg slickly fielded a sharply hit ball to his left and then threw a BB to Senior First Baseman Alex Hoeve for the first out of the inning.  The next two batters were, you guessed it, struck out.  No change in the score after three and one half innings played.

In the bottom of the third inning the massive home crowd saw the Cougars score two more runs.  Junior Shane Hendrickson led off the inning with a single to center.  Next up was Senior Brett Boyles who, himself, sent an infield single  to first base advancing Hendrickson to second.  Both Hendrickson and Boyles advanced on a double steal ending up with runners at third and second.  After a strikeout, Senior Alex Hoeve come to the plate for his second at bat.  Hoeve, again on the second pitch he saw of the inning, sent another single passed second base scoring both Hendrickson and Boyles.  Next up, newcomer Sophomore Elijah Joiner came to bat and was promptly plunked by the opposing pitcher placing the tuff third baseman at first.  A strikeout then ended the inning.  At the end of three complete innings of play, Cougars 7, the team from really close to Alabama, 0.

The fourth and final inning saw the first batter hit by a pitch placing him at first base.  He then stole second. This set up probably what could have been the play of the game and in my mind really was.  Sophomore Second Baseperson Alexandra Nebel now playing second as a defensive replacement crept behind the runner at second.  Seeing that the runner had gotten too far off the base Hendrickson then wheeled and threw a perfect strike to Nebel who caught the ball and placed a perfectly placed tag on the runner, but the astute and Eagle eyed? second base umpire called the runner safe.  From our vantage point in the first base dugout, the runner appeared out, but I may be biased.  Nonetheless, Hendrickson then promptly stuck out the next three batters bringing his total strike out total for the game to 10.  At the end of four and a half innings Cats 7, the guys in the third base dugout 0.

The bottom of the inning was the most interesting one of the day.  Junior Center fielder Larry Orsini, coming off a stint on the disabled list with Flu, led off the inning with a walk.  The second batter flew out to left field.  Junior Shane Hendrickson then hit a ground ball passed an outmanned shortstop for a single sending Orsini to second.  Senior Catcher Brett Boyles then came to the plate.  On the second pitch he sent a shot to left field that the left fielder did not play the ball well as he took a bad path to the ball resulting the ball getting by him and rolling to the fence scoring Hendrickson from first base and Orsini from third.  Junior Right Fielder D.J. Donaldson then walked placing him at first and Boyles at third.  This brought hitting star of the day Senior Alex Hoeve who sent a shot into center field scoring Boyles from third and sending Donaldson to third.  The game was called.  The final score The Good Guys 10 and the team from Oh my goodness I am glad I did not have to drive back home in Atlanta traffic, 0.

Coach Cox and I would like to welcome Coach Stephen Harlin (Coach Friday).  Coach Harlin, who does a great job with the Middle School Track and Field team in the Spring will bring his baseball background to assist Coach Cox and I on Friday.  He a very much needed and welcomed addition to our coaching staff.

Coach Cox, Harlin, and I would like to welcome the following newcomers to the team:

The Cougars are now 1-0 for the season.

Notre Dame Academy for a double header on Thursday March, 14.  First game at 4:00 at Bunten Park in Duluth. We look forward to seeing everyone at the game.

You proud and humble coaches,

Varsity Tennis takes to the Courts
Scroll to top