After 18 months the volleyballs were finally flying in the Cougar center. After a close loss at Mill Springs a few weeks ago the Cougars were facing the Mustangs once again. Nerves were high as the team wanted to win in front of the home crowd.

Alaina Larson and Yaffa Woodfield won the toss and the Cougars had the serve to start the game. Alaina Larson proceeded to serve 12 points in a row setting the Cougars up with a large lead. Madison Clark found a rhythm to score 4 points with 2 aces. After several back and forth trades in service Finley Love closed out the game with 7 serves and the Cougars took the first set 25 – 9.

The second match started with a fresh bench and some fresh nerves. After the first 10 points were scored the Cougars got into a rhythm with their serve. The game was traded almost point for point. We traded game point 3 times before Mill Springs took the second match 28-26.

The third match found the Cougars using their serves to slowly work their way to the magic 15 to win the match and the game. However, the Mustangs had a similar goal in mind and their servers also hit their stride. After calling a timeout to calm nerves on the Cougar side they came back on the court to return the Mustang’s serve and score the last 2 points with Aces to win the set 15 – 11 and to gain their first victory of the season.

Our next match is next Thursday vs the Middle School Staff. 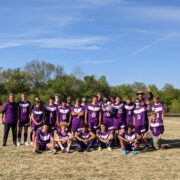