Dateline – Clarkston, Ga.: The Lady Cougars stampeded the Lady Mustangs to secure the third place in the 2020 tournament, setting the table for the Boys championship game later in the evening.  The game served as an emphatic exclamation point for the Lady Cougars’ historic second semester run.

Anyone expecting a cakewalk saw their expectations cruelly dashed in the early going as cold shooting woes continued to plague the Lady Cougars, while MSA rose to the occasion in their pursuit of tournament hardware.  Senior Maria Knezek broke the ice, scoring the first hoop of the afternoon on a deft assist form forward Emma Altermatt.  Despite tossing up a flurry of misses, TCS managed to grind out ten first quarter points on the strength of dominant offensive rebounding, with wily Junior guard leading the way with 4 first frame offensive boards.  Nebel and reserve guard Natalia Hoeve both gained buckets as a result of offensive tips ins.  Eighth grader Alyssa Briggs rounded out the scoring with a finish to the rim, and with a pair of free throws.  Aggressive pressing defense often short circuited the Lady Mustang attack, but thee players (Taylor, Gordon, and Suarez) all recorded field goals to keep their squad well within reach.

In the second quarter low shooting percentages and stifling defensive efforts combined to put both offenses into a deep freeze.  Cottage pushed through two scores, as both Briggs and Hoeve connected with jumpers, while MSA managed one field goal of their own.  At the half TCS owned a 14 – 8 advantage.

Despite the close margin, the Cottage players took great solace in both their rebounding and defensive prowess.  As long as these factors could hold constant for the final sixteen minutes, the ladies felt confident in their chances, but everyone resolved to find some way to break the scoring logjam in order to break the game wide open.  While not exactly opening the offensive floodgates, four Cougars did enter into in the scoring column.  Briggs led the way with a pair of buckets.  Senior center Shakirah Wazeerud-Din converted on her favorite power dribble and banker from the left block.  Nebel splashed home a long two pointer on a laser pass from Knezek.  Freshman Anna Mills added a free throw after drawing a foul on a “devil may care” drive into the paint.  On the other side of the ledger, Cottage held MSA to a pair of conventional field goals.

In the final stanza of the season Cottage held MSA to three points, while countering with a their best scoring quarter of the night, as they posted thirteen points, with five Lady Cougars getting in on the act. Mills started the quarter with a pair of free throws earned after another kamikaze style drive into the teeth of MSA defenders.  Briggs explored the outer limits of her offensive repertoire as she calmly drained her first three pointer of the season.   Knezek then nailed the final hoop of her high school career on a jumper assisted by Nebel.  Moments later, Hoeve dropped another jumper.  Reserve center Leighton Braglia then closed out the game with consecutive, high arching buckets.

The season ended with the “The Wizard of Waz” and “The Thief of Roswell” leaving the court for the very last time as members of the same Cottage squad.  The Cougar Nation wishes all of the best to these program stalwarts.  Sharkirah Wazeerud-Din played four seasons for the Lady Cougars, while Maria Knezek joined the team in her sophomore year.  Together they served as constants for the team, and will be sorely missed.  Thank you for all the memories!

Anna Mills and Emmi Dillehay served as the first two Cougars off the bench in this final contest.  Dillehay committed to physical play, as evidenced by her four fouls.  She stole a ball, and ran down an offensive rebound.  Mills scored 3 points, all earned at the line.  She also picked up a steal, and hit the boards 8 times, with 6 swept from the offensive glass. 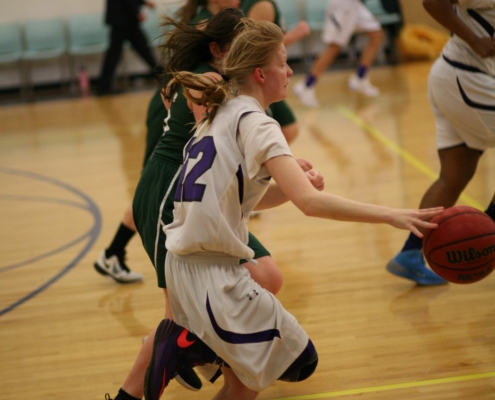 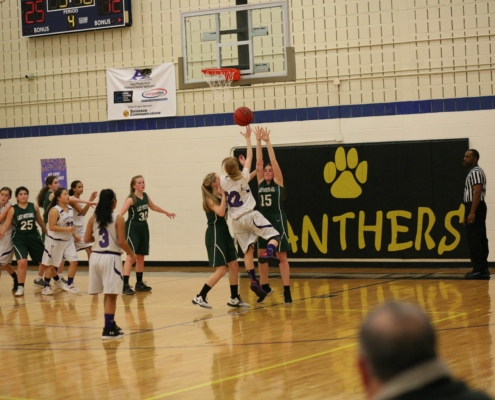 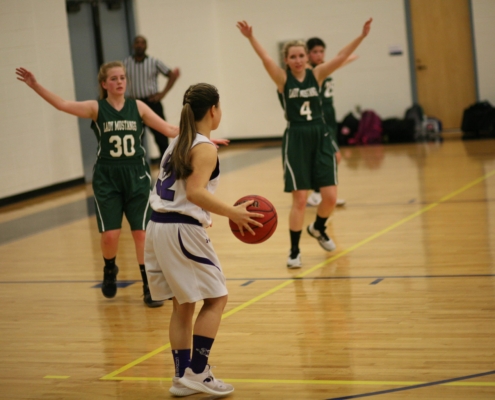 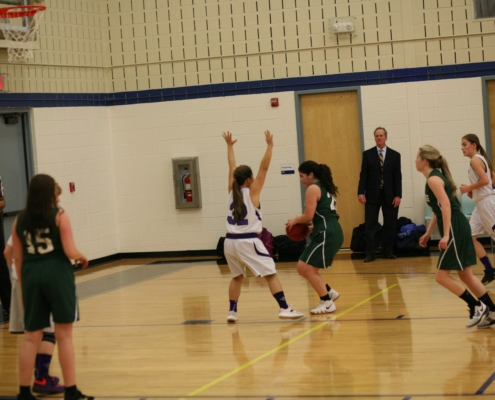 Natalia Hoeve put together her high water mark of the season, as she rang up 6 points.  Hoeve also helped herself to 2 steals, and hit the boards for 3 offensive rebounds. 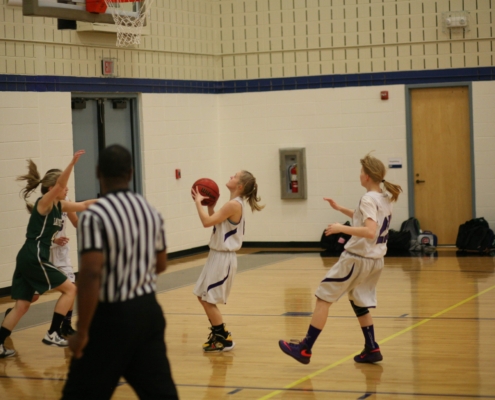 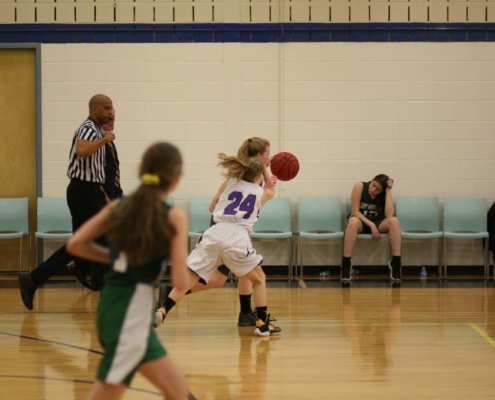 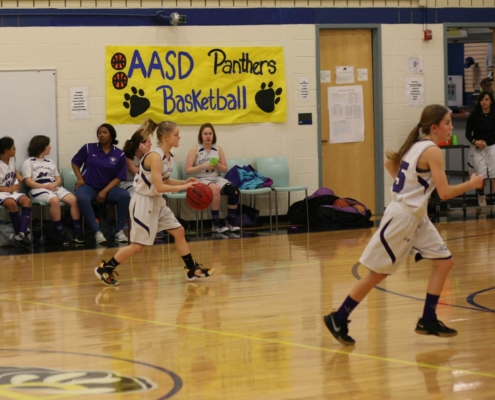 A number of backcourt reserves stepped into the action to maintain the defensive pressure.  Sophomore Maxine Moore saw action in both halves, chasing down a career high 2 offensive rebounds from the guard spot.  Seventh grader Finley Love picked up a steal, and showed her willingness to dribble into the teeth of determined defense.  In the second half freshman Lillian Travis ran down a steal near halfcourt to prematurely end a MSA offensive foray. 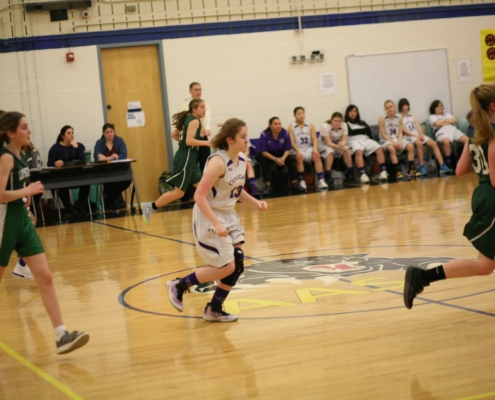 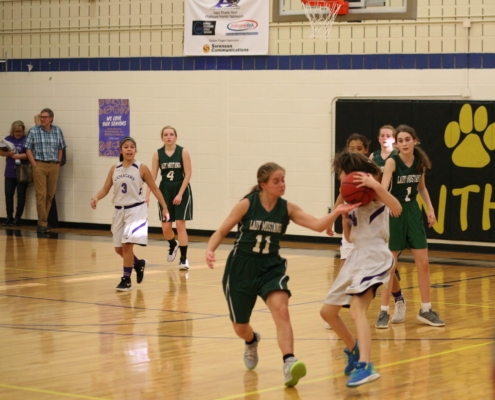 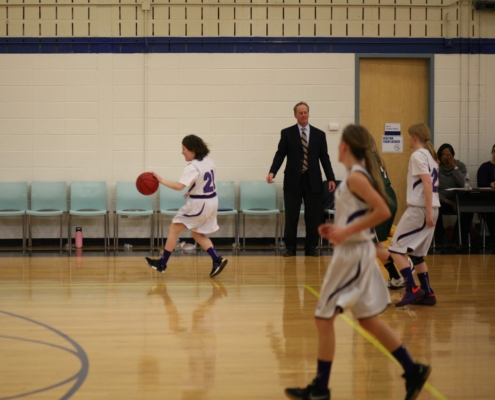 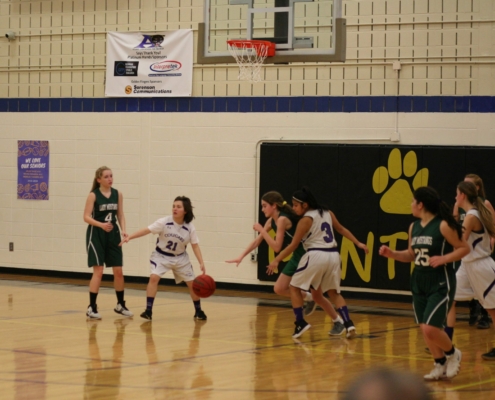 Leighton Braglia entered into the scoring column for the first time this year with her pair of fourth quarter scores.  The first occurred on a face up, six foot jumper, assisted by Briggs.  The next possession, Braglia grabbed an offensive rebound, launching another rainbow jumper from about the same spot. 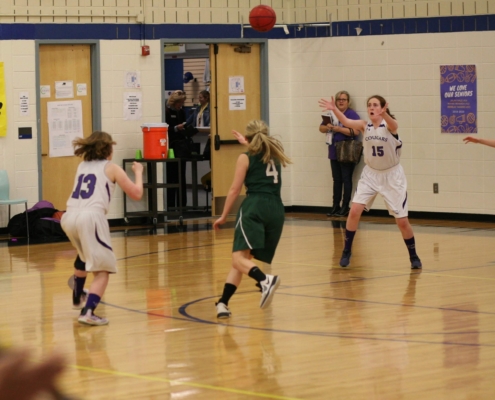 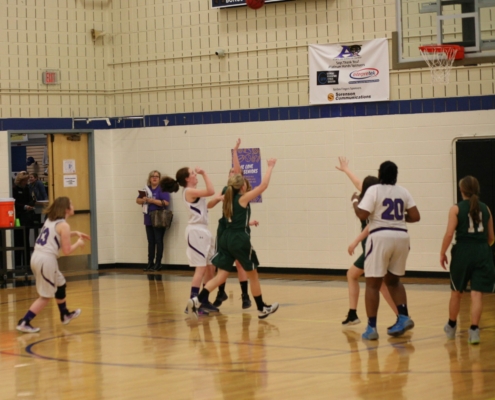 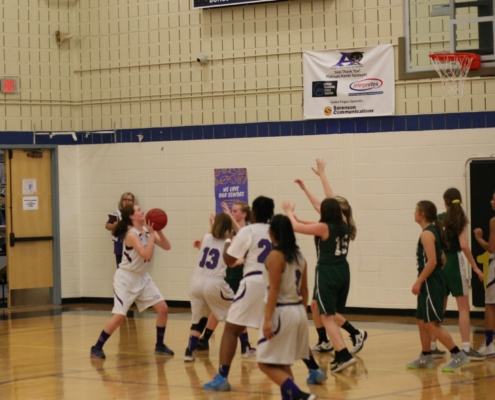 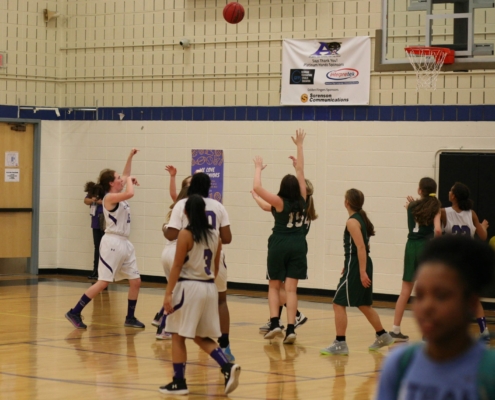 Emma Altermatt earned the start from the post positon.  Although she did not score on her two attempts, Altermatt passed for an assist, and corralled 2 offensive rebounds. 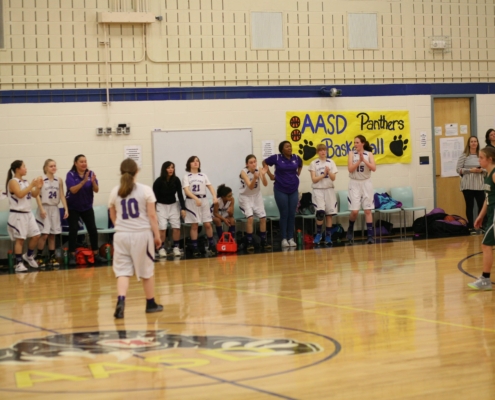 Alyssa Briggs led her team in scoring for the fifth time in the last six games, as she poured in 13 points.  Briggs passed for 2 assists, forced 4 steals, and grabbed 5 rebounds (4 offensive). 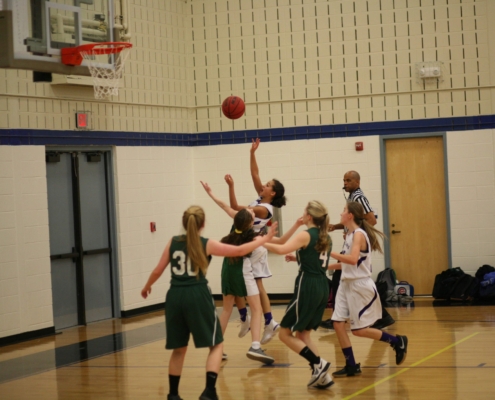 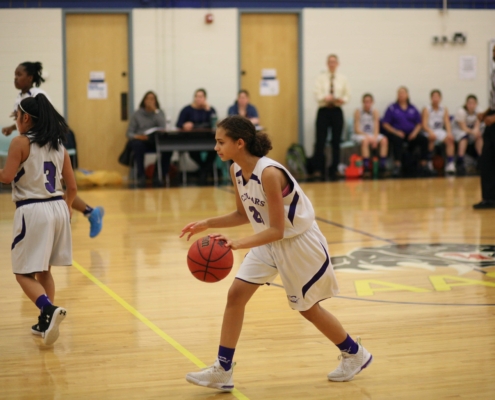 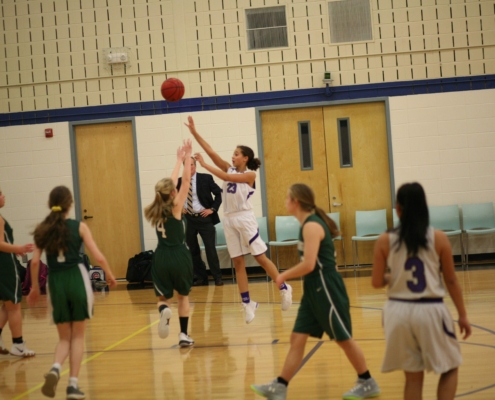 Alex Nebel scored 4 points, but did more than anyone else to set the tone for the contest.  Defensively Nebel gained a career high 10 steals, but she really lowered the boom on MSA by attacking the offensive glass with reckless abandon, swiping an eye-popping 11 ‘bounds from the offensive glass. 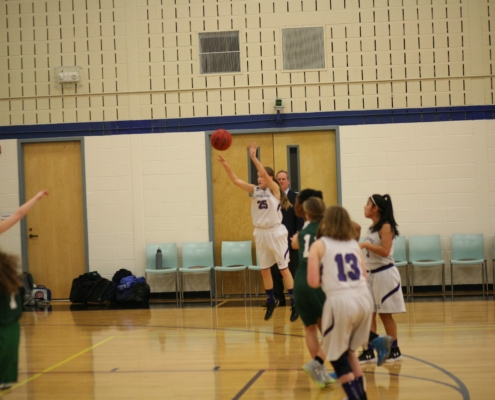 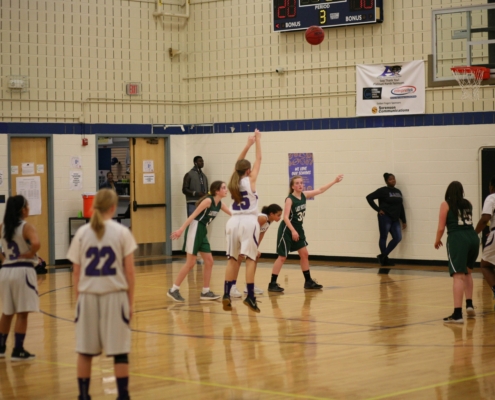 Cottage’s Batman and Robin donned the white and purple for the last time together.  Shakirah Wazeerud-Din locked down the paint as she grabbed 10 rebounds (3 offensive), stole a pass to the post, threw back 4 shots, and scored 2. Maria Knezek scored 4 points, stepped into the passing game with 2 assists, handled 4 rebounds, and ripped 11 steals to close the books on her career. 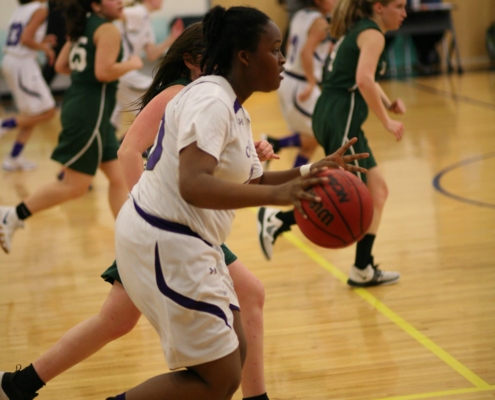 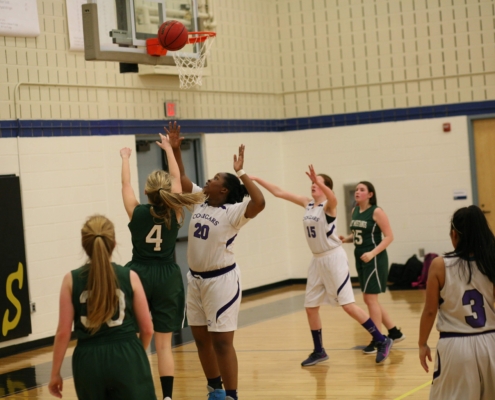 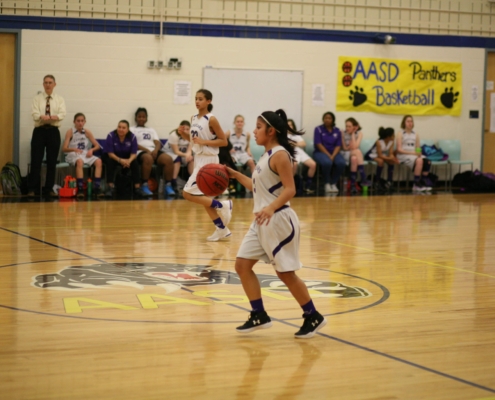 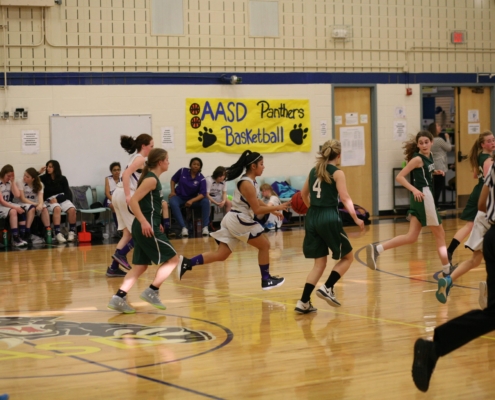 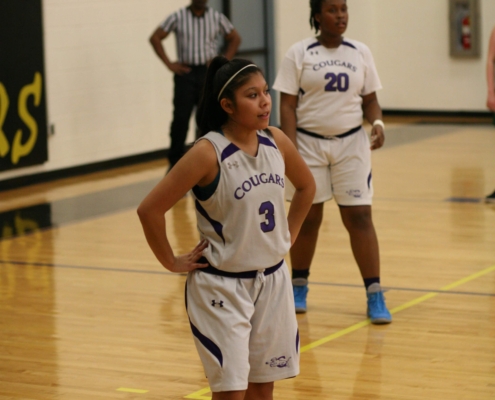 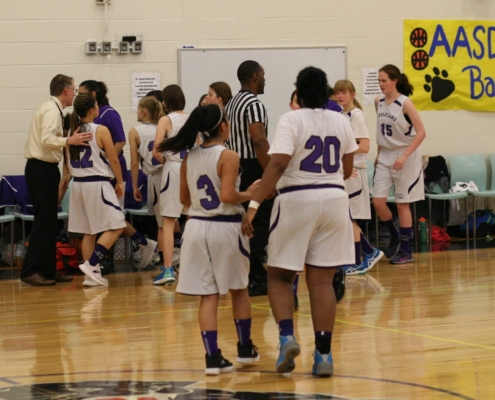 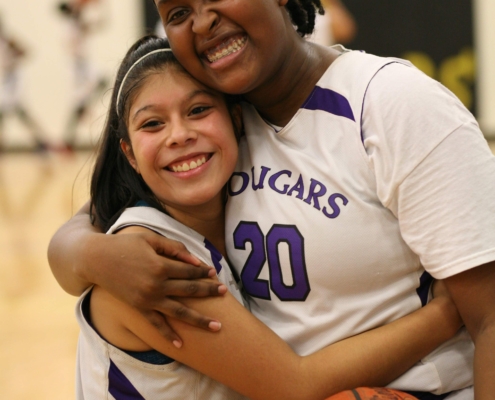 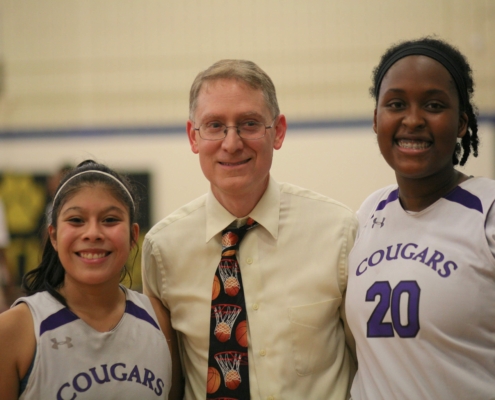 Follow Me!
Clock Strikes Midnight for the Cinderalla Cougars – AAS Wins in a Rockfight...