Dateline – Clarkston, Ga: Two of the A.A.C.’s flagship franchises collided in a re-match of last year’s championship game.  This semi-final match marked an opportunity for the Lady Cougars to punch their ticket to the finals for a second consecutive year, and an opportunity to continue their Cinderella season.  Unfortunately for the Cougar Nation, the Lady Panthers squeaked out a three point victory.  The issue did not get settled however, until the final play of the game, a game that lacked all elements of artistry, but which took the players and spectators on arguably the wildest of roller coaster rides ever experienced by the Lady Cougars.

At times this season games received descriptors like “a heavyweight bout,” “steel cage match,” or “defensive masterpiece.”  Somehow none of these word pictures adequately depict the combination of physicality, raw emotion, and offensive draughts that characterized these thirty = two minutes of basketball action.  In the first quarter, both teams committed a couple of turnovers before Alex Nebel threaded the needle and found center Shakirah Wazeerud-Din on the block, where she banked home a shot from the block.  Reserves Larissa Brient and Emmi Dillehay added the other TCS points in the first frame, as Brient connected on one of two foul shots, while Dillehay banked home another assist from Nebel.  In retaliation, AAS could only answer with a bucket from All Star guard Lexi Strothers-Egelston.

So far, so good, while hardly an offensive Rembrandt, Cottage clawed out a three point advantage, with reasonable hopes that the offense would come to life.  Instead the second quarter turned into a nightmare of offensive miscues, as the visitors only scored from the foul line, with Alyssa Briggs canning two of two, and Nebel knocking down one of her own.  While the TCS defense remained staunch, turnovers allowed the Lady Panthers too many looks at the basket.  During this pivotal quarter AAS ran up 12 points to claim a 14 – 8 lead, in a tally that casual observers might mistake for a football score.

Despite the fact that the team seemed stuck in a low gear offense, everyone could take solace in the fact that the margin remained a mere three hoops, certainly not an insurmountable deficit.  After 16 minutes of low voltage offenses, both teams suddenly kicked up their efficiency.  Briggs took charge with fearless drives to the bucket, as she willed her way to 8 third quarter points on the strength of 4 shots.  Freshman Anna Mills took inspiration from her counterpart and also consistently forced the issue on offense, frequently drawing fouls.  She connected on two free throws to bring her team’s total to 10, for the quarter and 18 for the game.  Unfortunately Lexi Strothers- Egelston chose that stanza to heat up, as she accounted for all 11 of the AAS points on a foul shot and a series of acrobatic finishes at the rim.

Now down seven points in a game, the Lady Cougars knew that each opportunity needed to be treated like gold.  TCS began their comeback in methodical fashion, finally achieving a breakthrough  with 3:22 left in the game, as the Lady Cougars seized their first lead since the second quarter with a 27 – 26 margin.  A bevy of free throws allowed the Lady Cougars to push the margin to 4 points,  but an AAS bucked and free throw knotted the game again.  AAS stymied Cottage on the next possession, and found Strothers-Egelston just behind the three point line.  She measured her shot, and splashed it home to the delirious cheers of the Panther Nation.  Just when it seemed that the three point harpoon might decisively propel AAS to victory, Junior guard Alex Nebel boarded her B-52, and donned her fabled bombardier jacket.  Tricky dribbling her way through defenders, Nebel shook loose, and found separation as she turned to the starboard bend in the three point arc.  She let her shot fly, to hit pay dirt, again tying the score at 33 points each.  The final 1:55 of game time came to mirror the scrum of a rugby match.  Bodies hit the floor, each shot received the utmost of contention, and a flurry of foul shots ensued.  AAS hit four down the stretch to extend their lead.  With just seconds showing Cottage could not convert, but somehow Briggs reared up for a three pointer and drew the foul.  Briggs banked home the first drawing her team to within three points.  Briggs then missed the second.  Cottage called timeout to draw up an unlikely “Hail Mary.”  Briggs would intentionally toss the ball hard off the bac krim, and players would station themselves for the long rebound in hopes of firing up a three pointer to send the match into overtime.  Instead the ball cleared the backboard, automatically turning giving possession to AAS.  With 0.3 seconds showing on the clock, the Lady Cougars immediately moved to cover all Lady Panthers.  In the confusion the AAS inbounder stepped over the baseline, setting the stage for a potential miracle finish.  With time enough for only a catch and shoot, the Lady Cougar sharpshooters took up their spots.  An alert Briggs spied a relatively open Anna Mills, who caught, and released the shot in one motion.  The shot had the rotation, the shot had the arc, the coach thought it would splash home. . .but the basketball gods conspired against the miracle.  The ball bounced out, and AAS survived to tell the tale, holding on to the 34 – 31 victory.

The Lady Cougars will take to the hardwoods one more time this season with a consolation game against the Lady Mustangs of M.S.A.  The action takes place in Clarkston Wednesday afternoon at 2:30 p.m. 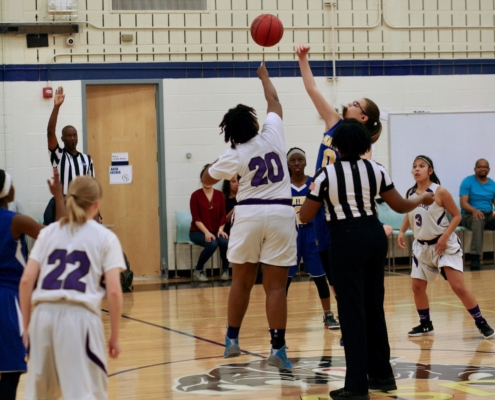 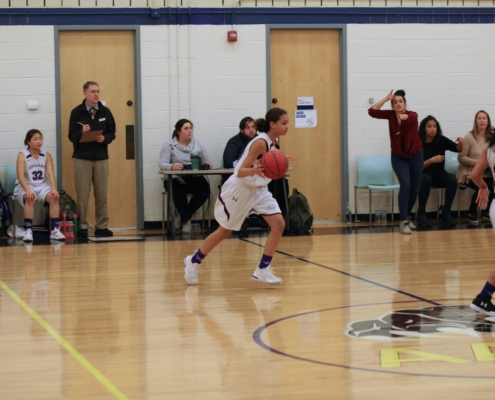 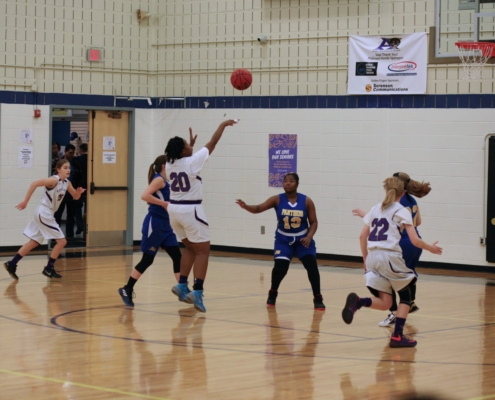 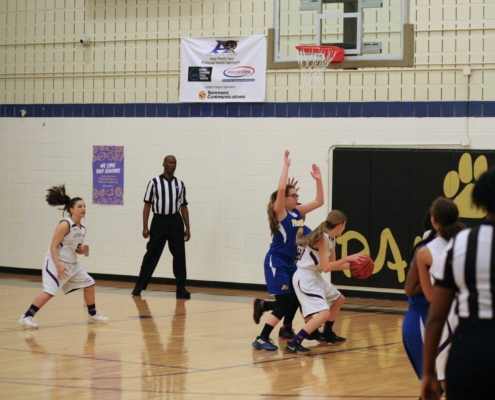 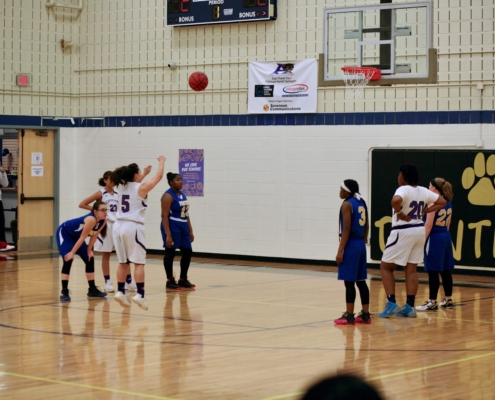 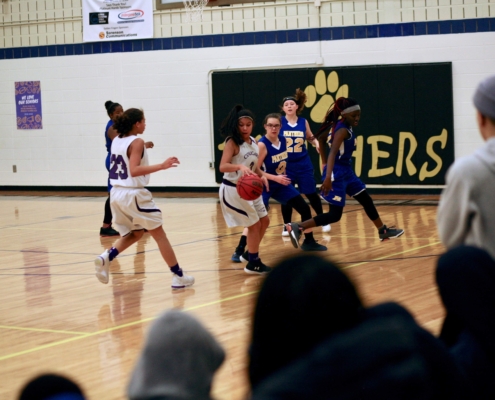 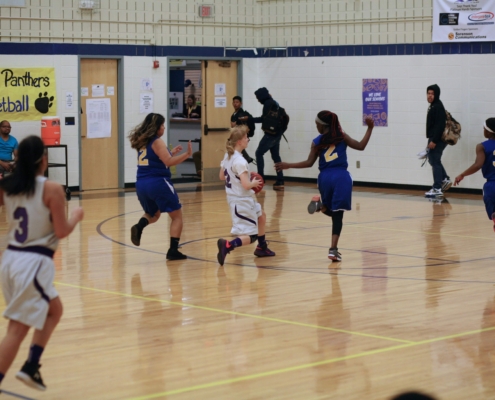 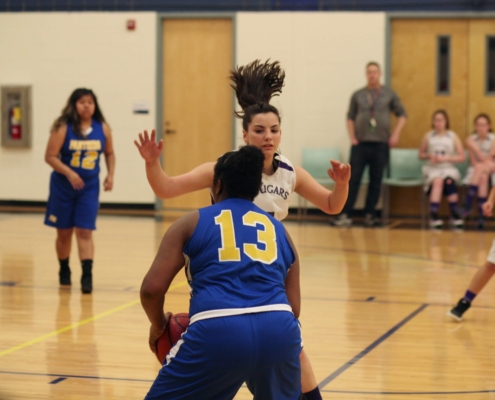 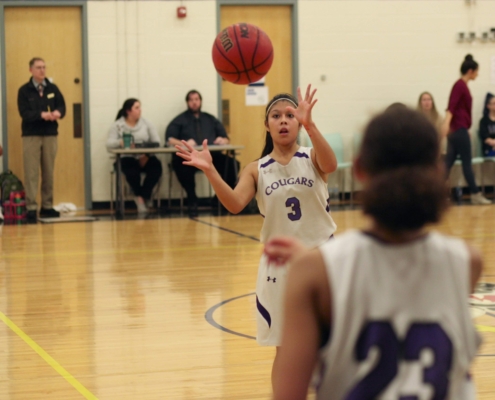 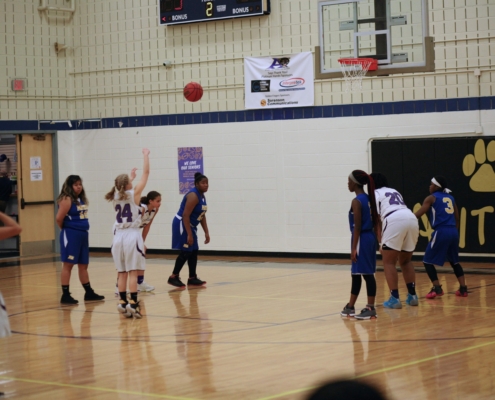 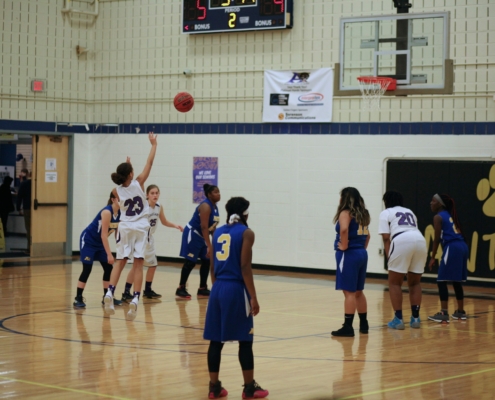 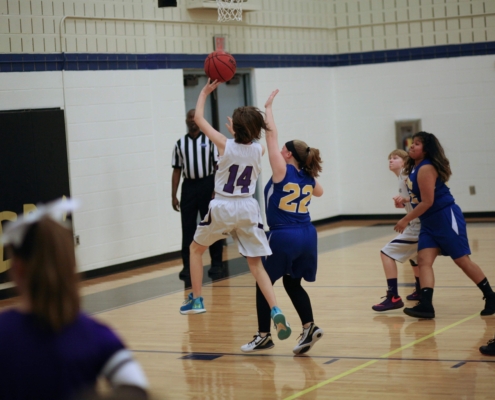 Larissa Brient took on the sixth man role for this contest.  She fought her way to 4 rebounds (1 offensive), forced 3 steals, and took on the unenviable task of chasing standout guards Strothers-Egelston and Pace all over the court.  Offensively Brient answered the bell with a first quarter free throw and a third quarter bucket to account for her 4 points.

Natalia Hoeve and Findley Love provided relief for the guards in first half action.  Hoeve also shadowed Pace, while Love tallied a rebound, and put on a dribbling exhibition as she weaved her way nearly the full court against determined AAS defense.

Anna Mills found her offense in the critical second half as she rang up two free throws in the third, and rattled home a field goal in the fourth.  Mills also gained a steal, and 3 rebounds (1 offensive).

Alex “Stangelove” Nebel shook off the after effects of the flu to put together a dandy stat line.  She led her team with 3 assists, grabbed 6 steals, hauled in 7 rebounds (3 offensive), and tickled the nets for 5 points.

Alyssa Briggs played well above and beyond her years on this evening.  She led her team in rebounding with 8 total (3 offensive), while also showing defensive prowess with a blocked shot, and 5 steals.  On the scoring front, Briggs loaded the team on her back as she blazed away for 15, with 13 made in the pressure cooker that constituted  the second half.

Fellow senior Maria Knezek had her hands full manning up on Strothers-Egelston for most of the night.  She saved her offensive fireworks for the penultimate quarter, knocking down a short jumper and a free throw in the waning minutes of the game.  She also corralled 4 rebounds, and thieved her way to 7 steals.

Follow Me!
Cougars start slow but shut down Hawks later to prevail, 48-31