On Friday night, TCS Cougars played host to the GICAA Lyndon Academy Terriers in a rematch from two weeks prior. Lyndon defeated Cottage by 20 points last time but on this Homecoming evening the action would be much different. TCS vowed to perform on a higher level. The Cougars used a packed crowd who were loud and proud all night, to aid in a historic come from behind 58-47 overtime victory.

With a 45-40 Terriers lead and just .59 seconds remaining in regulation, it appeared Lyndon was going to win the despite a well-executed game plan and an incredible effort defensively by the Cougars. Down to their final few possessions, Cottage had poise and found Parker DeMent open on the weak side elbow. DeMent drove the lane and made it a one possession game (45-42) with .41 seconds left. The Cougar defense stayed aggressive but tried not to foul. After a tough call, Lyndon missed both double bonus FT’s. TCS was fouled under the basket and also missed two FT’s as the clock showed .27 seconds remaining. While the Terriers attempted to get the ball down court, Cottage forced a turnover. With just 9.2 seconds in regulation Aidan Briggs pulled down an offensive rebound and was fouled going back up for the shot. He made the basket and sunk the earned free throw to tie the game at 45. After a Lyndon timeout, TCS forced another turnover with 2.3 left at mid court. The Cougars were unable to get a shot off in time so the epic battle would head to overtime.

With momentum on the home team’s’ side Cottage executed brilliantly on both sides of the floor. Shane Hendrickson and Tim Mattioli made key layups to cap a 13-2 OT edge and completed one of the top eight comebacks in school history. The Cougars won 58-47 and more importantly gained some big confidence heading down the final weeks of the AAC season. Coach Briggs spoke afterwards, “Wow! Suroy and I are so proud of the boys. Their focus, determination, and teamwork was outstanding the entire night. Our defense set the tone and with patience and we found a way to slowly creep into it. Lyndon has a fine team and two outstanding players (#3-Belle-Bonza & #10-Hughes). Those two guys still did some damage but we contained them well enough to give us a chance.”

The Terriers held a 13-6 first quarter edge but Cottage outscored them 13-10 in the second for a Lyndon 23-19 halftime lead. TCS took their only lead in regulation with 2:41 in the third stanza ahead 30-29, but Lyndon would go back up as much as 38-30 early in the fourth frame. The Cougars outscored the Terriers 15-7 over the final six minutes to force the tie.

Shane Hendrickson was amazing on defense. He had the tough challenge of guarding Lyndon’s best player, #5-Belle Bonza. This kid had 27 on us at their place. Tonight he was held to 15 and fouled out with just one minute left in regulation. Shane scored an overtime basket for a total of 4 points. He also gathered 5 rebounds, 2 steals, 2 assists, and a block.

Aidan Briggs had the game high of 20 points to go with 9 rebounds and 3 steals. 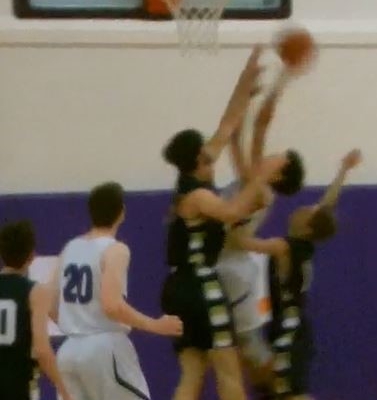 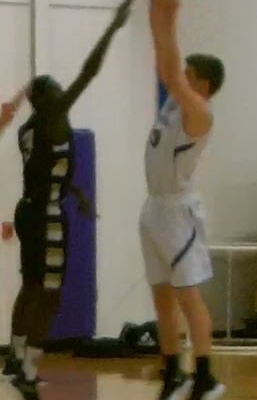 Murphy Husnik had one of his better games of the season with 11 points, 4 boards, 3 assists, and 2 steals. One of his steals could not have come at a better time. With less than two minutes in regulation and down 41-37, Murphy poked a ball loose at mid court and raced down for the bucket. Lyndon would score on their next possession, so many could say it was a game saver.

Parker DeMent scored all 6 of his points in the second half and pulled down 6 rebounds.

Tim Mattioli recorded 8 boards to go with 3 steals, a blocked shot, and 5 points (all 5 in OT).

Jeffrey Betts scored just two points but what a timely basket it was. When the Terriers had their biggest lead (38-30), Cottage just scored, hit a free throw, and Betts made a tough shot over their 6’7” center that kissed the glass into the net. Great timing for two reasons. Momentum was shifting to the Cougars and with the score now 38-35, Lyndon’s next three pointer that hit nothing but nylon could have been a dagger now only put the Terriers up six points with three minutes remaining.