Dateline: Sandy Springs, Ga. the Lady Jaguars of Atlanta Jewish Academy inaugurated athletic competition in the Ida and Harry Minsk Gymnasium, as they took to the hardwoods on Saturday evening.  The Lady Jags took a break from their typical  Ga. High School Association schedule as they extended this historic  invitation to the Lady Cougars of The Cottage School.  In their previous meeting, which constituted in the first game of the season for both teams, witnessed both teams working out the offensive end of the game, as TCS scored only 4 points.  The Lady Cougars approached this game determined to erase any previously formed conceptions of their scoring ability.

In the early going, each team found that stalwart defenses conspired to prevent the game from turning into a glorified track meet, replete with the fast break opportunities that characterized the first game.    AJA did successfully exploit gaps in the top of the Cottage zone defense to score their early points.  The Lady Cougars showed patience on offense, and scored their first basket on the strength of a Brandy Michelle Finnell low post move.  A couple of sequences later, super-substitute Alex Nebel worked to an open spot just behind the three point arc on the weak side of the court, and received a picture perfect skip pass from Maria Knezek.  Quickly measuring her shot before defenders rotated, Nebel let her three point harpoon fly and slashed home her second trifecta of the season.  At the close of the first quarter, the home town Jags enjoyed a 13 – 5 lead.

In the second frame, Cottage continued to force the ball inside, as Julia Baumohl, Tracy Li, Emily Daugherty, and Finnell all attempted field goals, or earned trips to the charity stripe.  Unfortunately, only Finnell converted on these opportunities, as she scored a bucket, and banked home a foul shot, accounting for all of her team’s points over the eight minute span.  A few timely fast breaks, and some follows on offensive rebounds allowed AJA to ring up a total of 24 points by the half.

In the second half, the Lady Cougars jumped out with a much more balanced offensive attack.  In the third quarter, an “and one,” courtesy of Finnell, another three pointer by Nebel, and a Knezek break away accounted for the team’s output.  In the final period of play, the team’s offensive efficiency increased, as evidenced by a game high 11 points, accrued through a mix of free throw, jumpers from the high post, power moves on the blocks, and an exciting fast break finish.

When the horn sounded to end the game, Atlanta Jewish Academy came out on the winning side of a 50 – 27 victory.  Although TCS certainly experienced challenges in containing the versatile Jaguar attack, they could proudly point to their second best offensive performance of the season, recorded against an emotionally sky-high and defensively adept opponent.

Analin Merchant earned her first points of the season on this evening.  Late in the fourth quarter, an AJA guard pumped up a long range jumper, which bounded high off the rim as Merchant thoroughly blocked out the closest Jag.  In desperation, the opponent climbed over Merchant’s back in a desperate attempt to claim the live rebound.  The official made the only reasonable call, whistling up the Jags for the foul.  Merchant went to the foul line, draining one of the two foul shots. 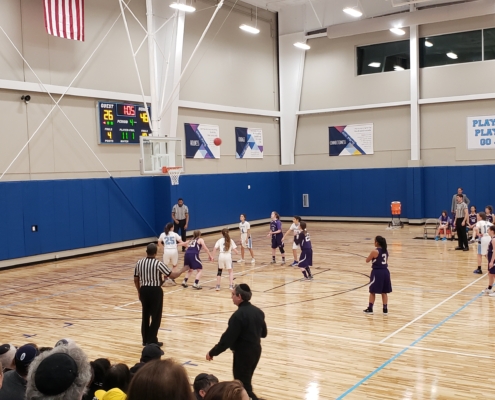 Emily Daugherty received the nod as the first player off the Lady Cougars’ bench, and received playing time in all four quarters.  Daugherty pulled down 3 rebounds, and nailed 2 of 2 foul shots.  Daugherty earned the trip to the foul line after getting fouled in the act of shooting from the post position.

Ninth grader Tracy Li also appeared in all quarters of play.  Li received several passes in both the high and low post, but did not connect on any of her shots.  Li did hit the boards 3 times, and came up with a couple of loose balls.

Finley Love and Maxine Moore also saw action in the game.  Love spelled the guards for a stretch in the third quarter.  Although she did not score, Love handled the ball, and received a number of passes from her wing positon.  Moore played in the final quarter  where she fed Finnell in the high post, and worked to prevent AJA penetration into the lane.

Alex Nebel registered a performance that made Dr. Stangelove proud.  Mirroring the fictional mad scientists’ infatuation with “the bomb,” Nebel unleased four “three balls” from outside the arc, draining two.  This marked the first time since Dinara Rothman donned a TCS uniform that a Lady Cougar scored more than 1 three in the same contest.  Along with her 6 points, Nebel stepped into the passing game with 2 assists.

Natalia Hoeve gained the starting nod, where her activity helped to match the backcourt intensity of the Lady Jags.  Hoeve dished the ball for an assist, while also gaining 2 steals.

Natalie Yager tricked a Lady Jag into committing a foul, thereby earning a trip to the charity stripe.  Yager also looked for her offense by firing up a couple of jumpers in the flow of the motion offense.  While not scoring in this game, Yager imprinted her impact thorough her 5 steals, 1 assist, and 2 offensive rebounds.

Maria Knezek used her quickness to dictate the defense tempo of the game.  Knezek came up with a 12 steal gem, scored 4 points, passed for 2 assists, and hit the boards for 2 rebounds.

Julia Baumohl fought her way to the ball in the low and in the high post on several occasions, earning multiple trips to the foul line.  In addition to her 1 point, Baumohl hauled down 5 boards (including 2 from the offensive end), and stole 2 balls.  Just for variety’s sake, Baumohl also jumped at the opening tip for the first time this year.

Brandy Michelle Finnell played a valiant post game on both ends of the court.  Offensively, she shouldered the scoring burden in a big way, coming up with a career high 13 points.  The points all came from the foul line, and from the paint, where Finnell often seemed to wear a white jersey on her back all evening long.  In addition to scoring prowess, Finnell also hit the boards hard, picking up 15 (including one offensive) over the course of the evening.  The stat sheet also credits Finnell with a steal.