The third match of the season and the Cougars are rolling along at a pace that didn’t show up until much later last season. Some of the parents in the stands were taking note of the location of the defibrillator due to the action on the court yesterday afternoon when the Lady Cougars traveled to their first away match of the season at the Atlanta Jewish Academy.

The Cougars started strong, moving first on the scoreboard. It was a back and forth game and Cougars had the lead 7-4. Lady Cougar serving was exact, taking them into the lead, Esther Buckingham serving strong overhand, Cougs are 9-5. Shakirah Wazeerud-Din has a kill on the net (it was awesome!). Shakirah then makes her way to serve, dropping a well-placed ace, bringing the score to 13-10. Captain Tracy Li was a leading force in both spirit and coverage as she played well on the net and backcourt with key passing, helping to keep adding points to the Cougar score. Sophomore Natalia Hoeve was like Flash Gordon as she kept popping into the right spot to keep the ball in play. Senior Alecta Feely resurrected her overhand serve and showed it off as she dropped two aces of her three serves, Cougs still in the lead at 21 -16. AJA needed to make their move and had a long 7 point serving run, pushing past the Cougars. The Cougars weren’t done quite yet, Shakirah and Esther covering the net to earn back the serve. Emily scores another point but AJA edges into the close win, 23-25. 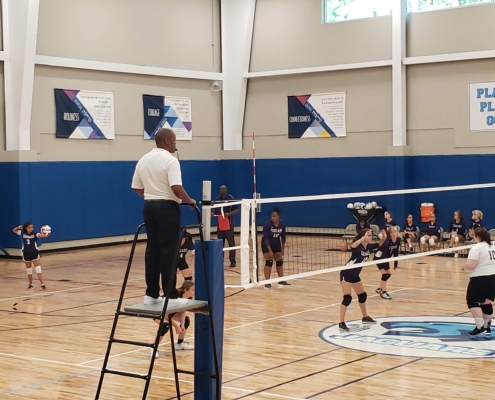 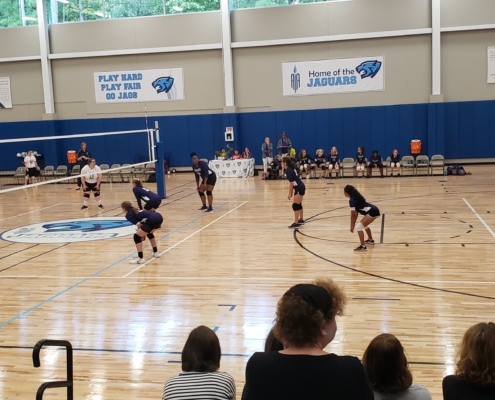 Game two begins with great passing by Emily, earning her the serve. Volleying is again strong as the Cougars cover the court and bring us back to 4-4. Shakirah nails 3 consecutive serves. Natalia continues her speedy and quick court coverage. Lady Cougars keep the lead in their favor but then errors from both teams send them back and forth. Esther shakes off the dust and drops 6 serves including 2 aces, Cougars 24-20. AJA #6 sends some tough serves and challenged the Cougar backcourt. The young ladies work through some court adjustments and finally get the serve in play, volleying and playing with some spirit. It was a thrill to watch them play it out but AJA pulls in another close set, 24-26.

Here goes game three, Cougars were a little down but coaches reminded them that they are still in this match, keep the heat on. Ladies start a bit slowly playing back and forth with balls going between servers. Cougars start to move into the lead as Esther gets things going with a string of serves and amazing backcourt coverage. Junior Erin McNeal subs in to provide some passing strength. Communication is on with the ladies as they move together following the ball and making some smart plays to the deep AJA court, throwing off the Jaguars. Strong serving is the theme for the team this match, Tracy has two serves, now 15-15 and Shakirah drops two serves, pushing Cougs to 18-17. Cougar crowd is cheering. Natalia aces a serve, followed by two more, score 21-17. Cougars have to regroup as the AJA server throws some heat their way, score 21-22. Cougars adjust in the backcourt and return the serve, earning back the ball. Alecta’s wiley serve puts down another point, 23-22. Little more back and forth volley, bringing the score to 25-26. Tracy places two deep serves giving the Lady Cougars game 4, 28-26.

The crowd goes wild along with the Lady Cougars. However, game 4, they got started but never really got going as the momentum seemed to side with the Jaguars. Final score 9 -25. So proud of how this season has started for the team and how they will continue to improve as the season moves along. The Lady Cougars host Brandon Hall on Thursday, August 29 at their home court at 4pm. Come out and cheer them on!