WOW!! What a day!!! The morning started off with Tennis having a great showing on the first day of their two day tournament, good luck today Coach Chelsea Porter and Golf secured their first ever AAC Golf Championship by defeating Mill Springs by one stroke, Congrats to Coach Brent Hendrickson and the Golf team.

So it was our turn. The team was eager to get started. After a fantastic lunch provided to us by the Senior parents and spearheaded by Mrs. Hoeve, the team traveled one last time to the Cougars Den to defend their back to back to back AAC Baseball Championship against the dreaded Mill Springs fightin’ Mustangs. Playing under the most perfect playing conditions, the eager Cougars took the field.

In the top of the first inning, Junior Pitcher Shane Hendrickson, took to the hill to face the ponies. Hendrickson quickly took control and stuck out the first two batters he faced. The third batter of the frame then send a sharply hit ball toward the gap between second and first but second base person Alexandra Nebel tracked the ball down and calmly threw to Senior First base man Alex Hoeve to end the inning. At the end of one half inning of play, visitors 0 and the home standing Cougars coming to bat. 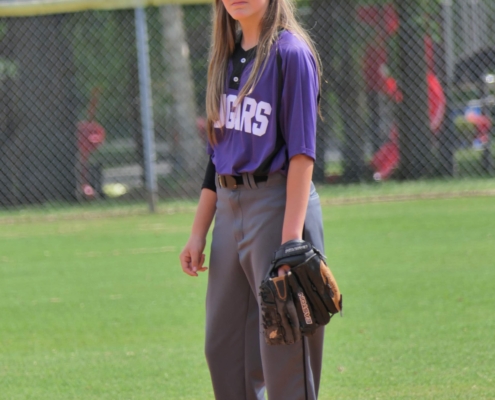 In the bottom of the first inning after a strikeout Junior Shortstop Seth Goldberg enticed a walk from the tall, lanky, slender, young man without a lot of weight, mustang slinger. This brought up Hendrickson to the plate. During the first pitch, Goldberg stole second. Hendrickson then got on base via an error by the very short, shortstop resulting in Goldberg taking third on the throw and Hendrickson on first. The next batter was Senior Catcher Brett Boyles. During his at bat, Goldberg scored on an unfortunate passed ball. Boyles eventually walked but both he and Hendrickson was stranded on base. The score after one complete inning of play, TCS 1 and the green clad visitors 0.

In the top of the second inning the strike zone tightened up forcing Hendrickson to throw picthes that were more down the middle rather than staying on the corners as we would like. The result was the first batter of the frame, accidentally hitting a ball over Freshman Left Fielder Aidan Briggs’ head rolling to the fence. The only thing that kept the runner from ending up on third base was the fact that Briggs tracked the ball down and got it to the relay man just as we practice it. The next batter then grounded out to Senior First Baseman Alex Hoeve but the runner at second took third on the play. With one out and a runner at third, the next batter came up and hit a fly ball to center field where Junior Larry Orsini make the catch and gunned the ball back to the infield holding the runner at third. The strike zone continued to get squeezed by the home plate umpire resulting in back to back walks and putting a horsey at each base. Undaunted, Hendrickson reached back and on four pitches struck out the next batter ending the scoring threat and preserving the shutout. Score remained TCS 1 and the other team, 0. 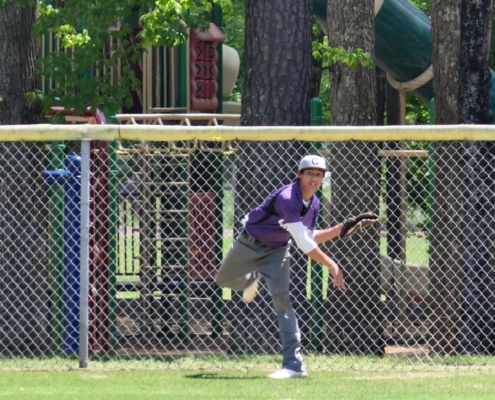 In the bottom of the second inning the Cougar bats came alive. Senior First Baseman, Alex Hoeve led off the inning. Hoeve eventually got on after being hit by a pitch. He stole second and then Junior Right Fielder Dalton Lantz got on by way of an error on the left fielder scoring Hoeve. This brought Senior Third Baseman Murphy Husnik to the plate. Husnik walked. Lantz scored on a pass ball. Junior Center Fielder then came to bat and got into the hit parade as he too was plunked. This brought up Junior Shortstop Seth Goldberg. Orsini stole second base. Goldberg then singled scoring Husnik and Orsini. Goldberg then stole second base as Junior Shane Hendrickson was at bat. Hendrickson then sent a sharply hit single to left field scoring Goldberg. This brought up Senior Brett Boyles to the plate. Hendrickson stole second base and then scored on Boyles double to left center field. The next batter was Freshman Aidan Briggs who promptly singled to left center scoring Boyles. After an out, Senior Alex Hoeve again came to bat in the inning. During this time Briggs stole second and then third and eventually scored on a pass ball. Hoeve walked, stole second and then third. After the second out of the inning Hoeve scored on a single by Senior Murphy Husnik, he then took second base on an over throw by the short stop and eventually ended up at third on a steal. Junior Larry Orsini then drove Husnik home on a single that just got over the shortstops head. This brought up Junior Seth Goldberg. During his at bat, Orsini stole both second and third as the Cougars continued to exploit the visitors inability to stop their running ability. Goldberg then got his second hit of the inning driving Orsini in to score. While Hendrickson was at bat, Goldberg stole second base and was driven in on Hendrickson’s second hit of the inning. This ended the scoring for the Cougars in the second inning. Score now was, The Cougars 13 and Sputnik the Wonder Horse, 0. 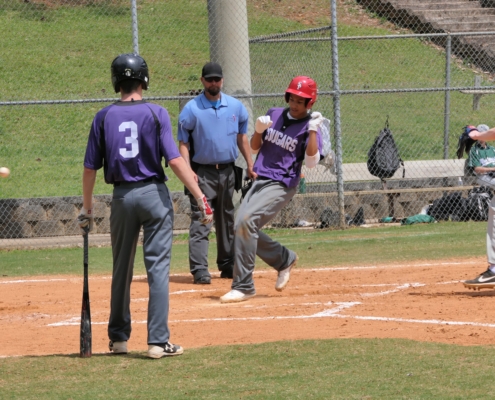 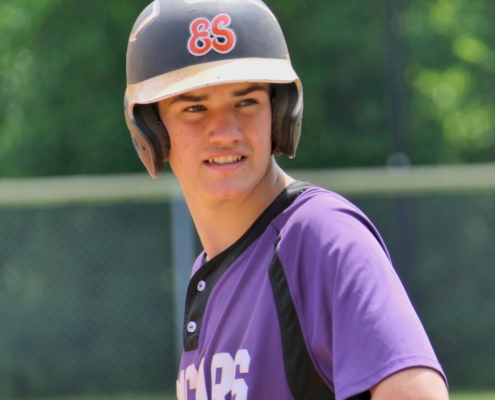 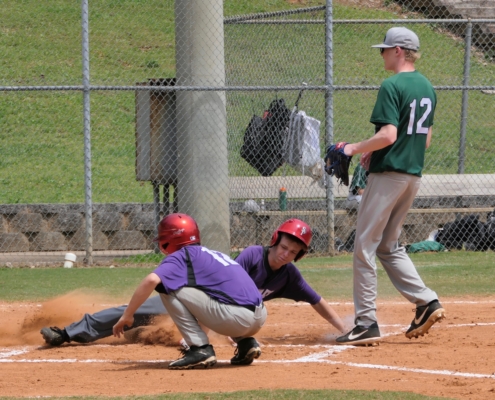 The top of the third inning produced the play of the game. As the strike zone continued to shrink Hendrickson refusing to give in, just like Smoltz, Glavine, and Maddox did in the past, was content to stay on his pitching path and rely on his defense to help him out. So eventually three batters did walk, all on questionable ball four calls. With the bases loaded, Senior Catcher Brett Boyles and Senior Third Baseman Murphy Husnik completed a catcher to third put out as the runner at third wondered too far from the base and was caught. This is a play that the two had practice several times in practice. The next batter then sent a lazy fly ball to center field where Junior Larry Orsini was waiting on it for the second out of the stanza. The next batter then sent a two hopper to Junior Shortstop Seth Goldberg who fielded it textbook style and fired a perfect strike to Senior First Baseman Alex Hoeve to end the inning. Score remained 13-0.

The next inning ended with three ground outs. This was after defensive replacements were brought in so that our Senior players could receive applause for a job well done during their four years of Cougar baseball. The first out was recorded with a bouncer to Junior Shortstop Seth Goldberg who threw to Senior Alex Hoeve. The second out came as new third baseman Sophomore Elijah Joiner calmly fielded a sharply hit ball and threw a strike to new first baseman, Junior D. J. Donaldson. The third out came as new third baseman, Junior Mac DeBalsi, who took over third when joiner moved to shortstop, fielded a ball and threw out the runner ending the game. Final score The Good Guys 13, the visitors ZERO!!!!! 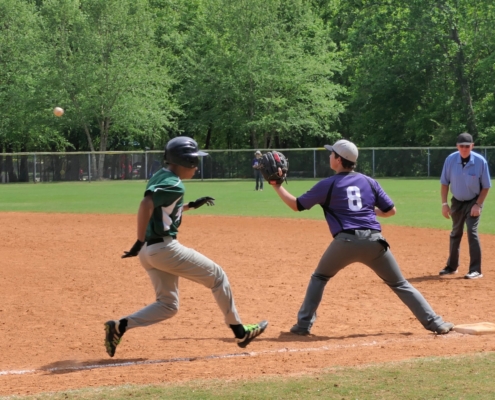 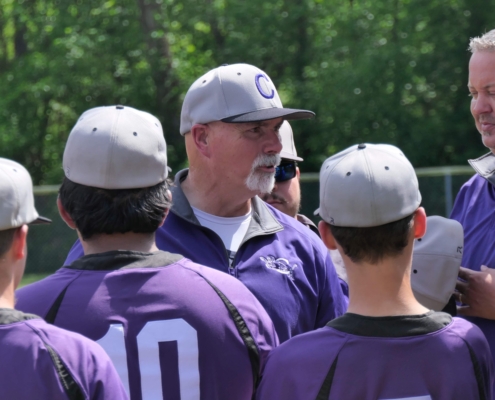 What a great year and what a great team. Thanks to everyone who came out yesterday, the hillside was crowded and the team noticed it too. 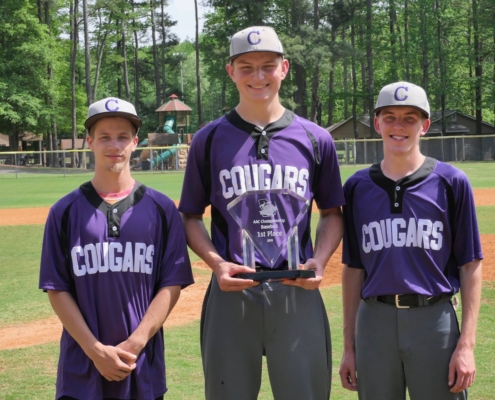 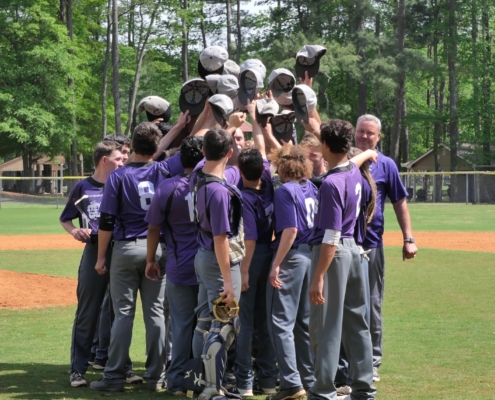 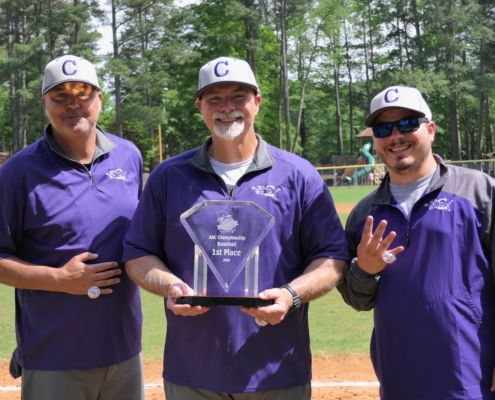 Thanks also to two great assistant coaches. Casey and Stephen are two of the best and our success, in large part, is due to their efforts. When you see them congratulate them on a job well done.

Also, one of my former assistant coaches, Ryan Lafitte will have his drama troupe on stage tonight at 6. I would like to invite everyone out to see a most awesome performance led by one of the best directors in the state.

Your Proud and Humble Coaches