Dateline – Roswell, Ga.  On Wednesday afternoon the Lady Falcons of Furtah Prep. Academy landed in the Cougar’s lair for the last game of the 2019 calendar year.  Riding the wave of two well executed games, TCS wanted nothing more than to close out the year with consecutive wins.

Furtah won the opening tip, as the officials whistled Shakirah Wazeerud-Din for hitting the ball on the way up.  The Falcons immediately capitalized with a basket from deep inside the paint, establishing a quick lead.  The Lady Cougars immediately tightened up on defense by applying maximum pressure on the perimeter while effectively shutting down access to the post.  Harried at every turn, TCS snuck in for steals, and also forced dangerous passes, netting a flurry of turnovers.  On the other side of the ball, the Cougar seniors stepped up to provide some badly needed scoring as Wazeerud-Din dribbled into the post and dropped in a short banker to put her team on the board.  Maria Knezek also stepped up with two hoops of her own.  As the first frame wound down, sixth grader Malia Richards found herself as the recipient of a pass in a semi-fast break.  Without missing a beat, the young guard let the ball fly, drawing contact on the arm from an overreacting dark jersey.  Richards strode to the charity stripe where she nailed the second of her two foul shots.  The foul shot proved critical, as Furtah finished with a basket, allowing TCS to escape with a razor thin 9-8 advantage. 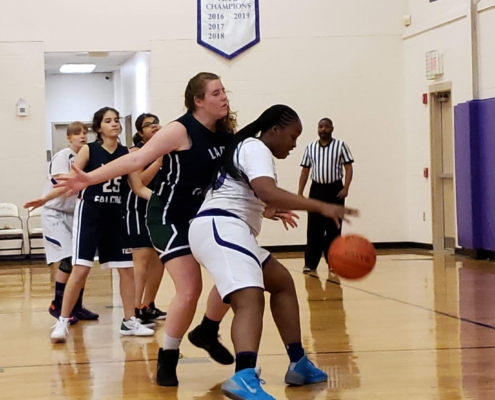 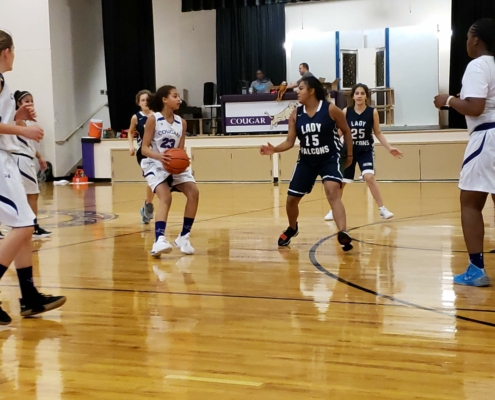 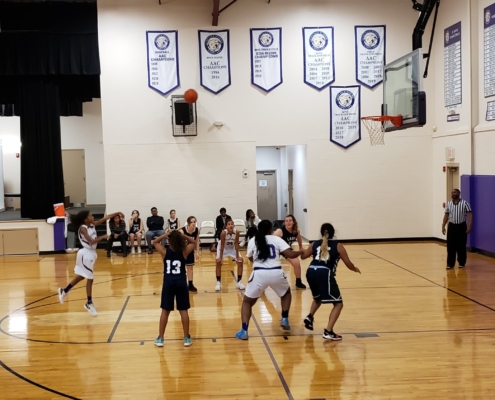 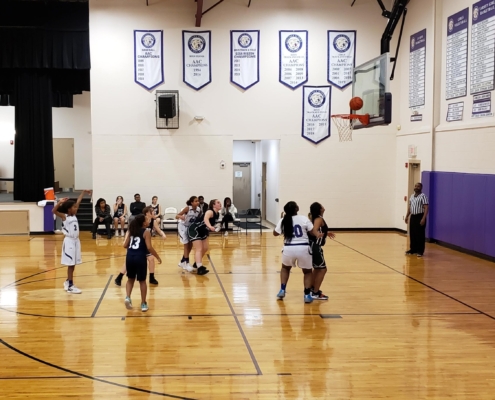 The thin margin seemed to motivate the home town ladies, as they tied their season high with 15 points during the second stanza.  Alyssa Briggs acted as the human batting ram, forcing the issue on offense as she rang up 9 points in the quarter.  Briggs inflicted damage on offensive rebounds, fast break finishes, a foul shot, and just old fashioned drives into the paint.  Freshman Ana Mills drained two mid rangers, while Knezek completed a mid-court steal with a lay-in of her own.  As prolific as TCS seemed on offense, key lapses on defense allowed the Lady Falcons to keep the contest well within reach, as Cottage escaped with a 24 – 16 margin. 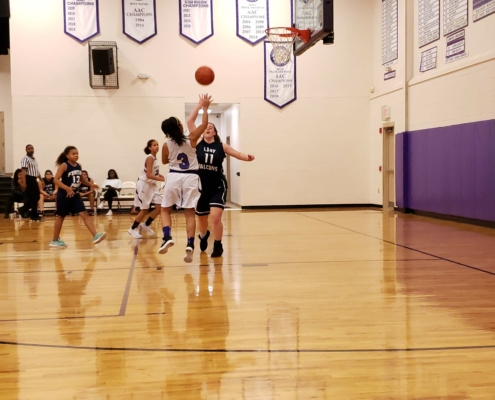 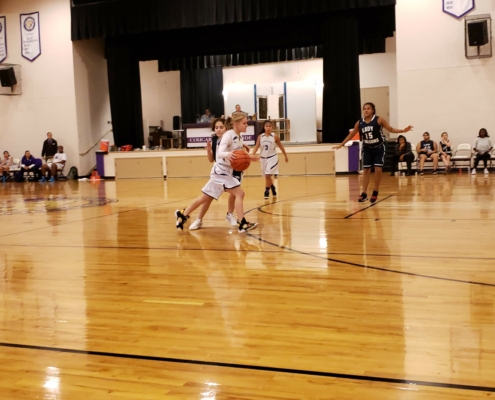 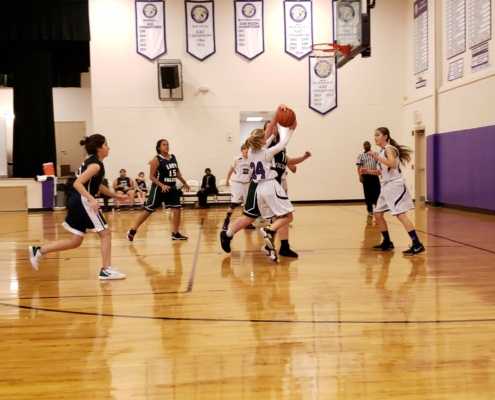 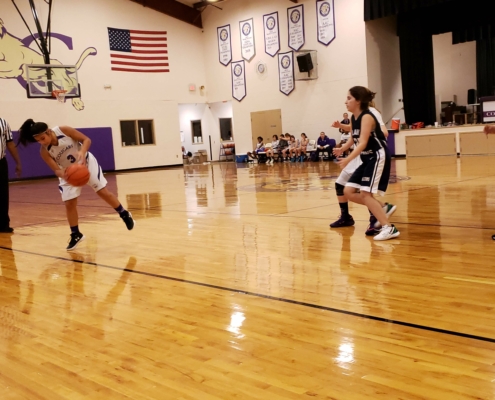 Perhaps visions of dancing sugar plums proved too distracting for the Lady Cougars, as Furtah scored two consecutive shots to start second half action, pulling their squad to within four points.  Sufficiently humbled, TCS called a full timeout to talk things over and make some needed adjustments.  Tightened attention to the post took away Furtah’s preferred point of attack, and limited the visitors to only four more points over the last 6:13 of the third quarter.  Offensively the Lady Cougars came to life, as four teammates (Wazrreud-Din, Briggs, Mills and Alex Nebel) all jumped into the scoring column.  Nebel stirred the crowd and brought her teammates to their feet as she splashed home a three point dagger.

Now holding a 35 – 24 lead, TCS knew that they would still need to provide eight final minutes of effort to successfully hold onto the win.  Bench players stepped up to maintain the defensive pressure, and limited the visitors to a miserly six points.  Natalia Hoeve recorded her first score of the season as she nailed a twelve foot jumper.  Briggs attacked the paint for another hoop, and a pair of foul shots.  Mills applied the icing on the cake as she connected on a short jumper of her own. 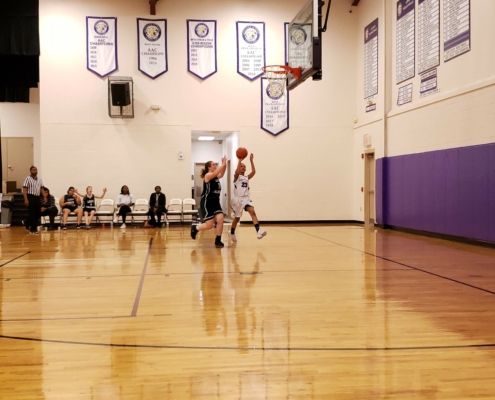 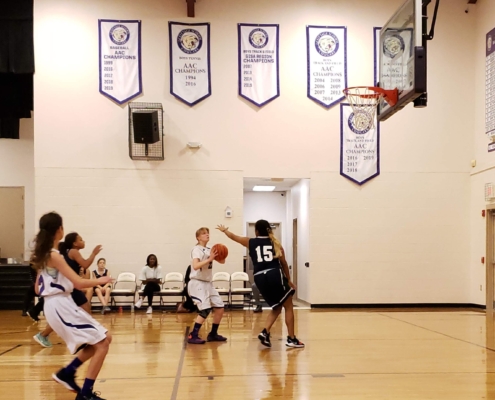 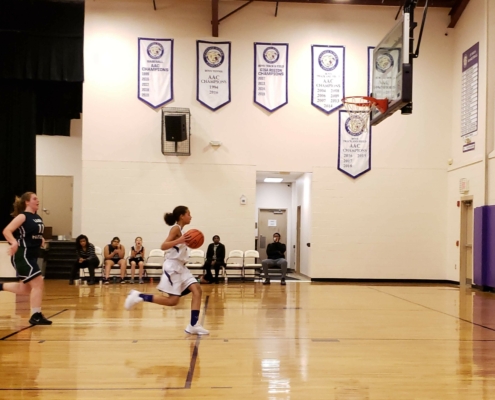 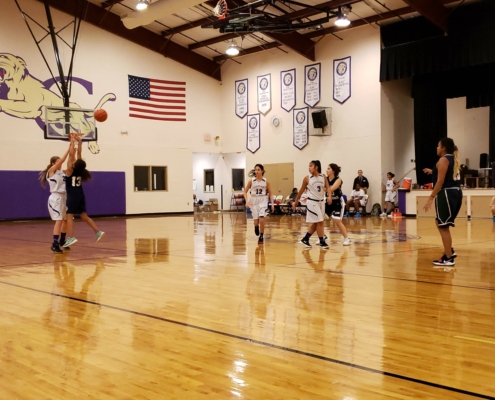 At the conclusion of the fourth, the Lady Cougars found themselves on the right side of a 43- 30 win.  The victory marked the third time this season that TCS broke the forty point threshold.  The win also allowed the team to boast a two game win streak as high school basketball closes up shop for the Holiday recess.

Natalia Hoeve filled the sixth man role in her long anticipated return to the hardwoods.  Hoeve scored her first points of the season on the strength of the fourth quarter jump shot described in the game write up.  She also tallied a pair of offensive rebounds, and generally covered the perimeter on defense.  As absences made frontcourt depth an area of weakness, the diminutive guard actually needed to log some minutes in as a high post player on defense.  While not the way any coaching staff would choose to deploy the dynamo guard, Hoeve demonstrated her determination and grit by embracing the challenge.

Sixth grader Malia Richards also participated in the scoring party, as she recorded the first score of her TCS varsity career as she nailed her first quarter free throw.  Richards returned to action in the second half, where she ran the floor well, and continued to apply the needed defensive pressure.

Maxine Moore helped to fill the glaring need in the frontcourt when she checked in to take high post duty in the team’s defensive set.  Seventh grader Finley Love filled in during both halves.  Although she did not connect on her shots this evening, Love did lay claim to 2 offensive rebounds, and also handed out an assist.  Freshman Lillian Travis and seventh grader, Hannah Katz also saw action in each half, holding down the fort on the perimeter, while fellow MS teammate Eleanor Gaffneystone saw her backcourt action in the fourth frame.

Alex Nebel scored 3 points as the result of her trifecta launched in the third quarter to help put the ice on the Lady Falcon’s mini-run.  Nebel also continued to evidence heads up and all-around play as she forced 6 steals, grabbed 2 offensive boards, and assisted on 3 plays.

Shakirah Wazeerud-Din helped herself to 7 rebounds (2 of them offensive) and 6 points.  The senior center also threw back 3 blocks, disrupted passes with 3 steals, and also dished for 1 assist.

Ana Mills put together a highly balanced game.  She led her teammates with a haul of 10 rebounds, including an eye popping 7 from the offensive glass.  She also demonstrated defensive presence with her 3 steals.  On the offensive side, she nailed 4 short to mid-range jump shots to tally 8 points for the evening.

Maria Knezek continued her manic presence on defense, gathering a game high 8 steals.  Offensively, Knezek hit the boards for 4 offensive ‘bounds, passed for a team high 4 assists, and scored 6 points.  Two points came from the charity stripe as she nailed both of her opportunities in first quarter action.  She also pumped in two finishes in the form of lay-ups to cap off fast break opportunities.

Alyssa Briggs celebrated with a milestone of her own – becoming the first eighth grade student to score 19 points in a Varsity contest.  She scored three free throws, and connected on 7 field goals to account for all of her damage.  Lest anyone get the wrong impression, the points did not provide the only fireworks for Briggs, as she played a well balanced game.  She patrolled the boards well, gathering 8 (6 offensive), while also assisting on 2 scores, and also gaining 7 steals of her own.

The players and coaches would like to thank the fans who made the afternoon so special, and who provided us with encouragement and support all season long.