Tuesday, April 23rd was such a beautiful day at the Sandy Springs Tennis Center. Cougars showed up ready to play and boy did they play! I have never seen them exude such tenacity. Amazing form, 100% effort for every shot and every point, and such respect (which is the most important to me) which Mill Springs shared with me our school has ALWAYS shown the upmost respect than anyone. 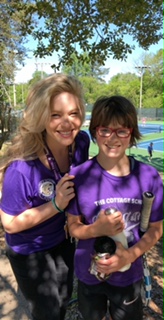 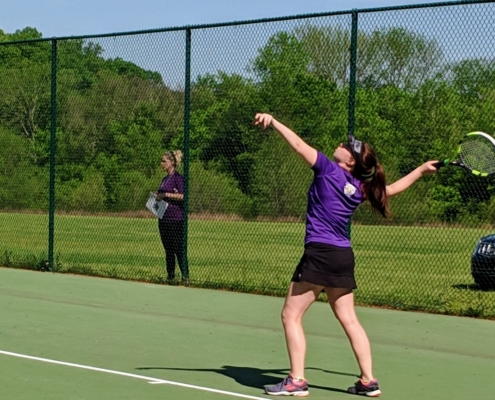 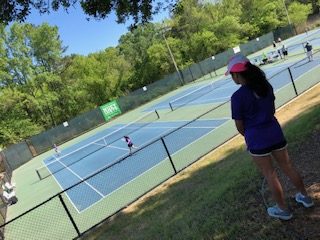 Natalie’s 2nd match was against yet again ANOTHER teammate, Maggie and Natalie won 8-1.

Maggie won her 1st match 8-5, the opponent started gaining a lead but Maggie stayed one step ahead. She then played her teammate Bella and won 8-1. 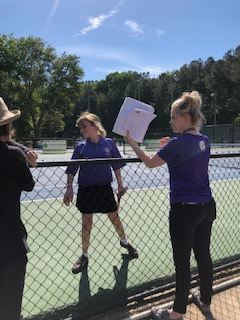 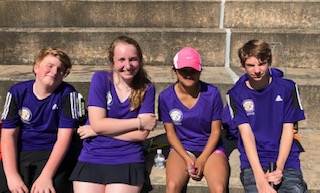 Grace lost her 1st match 3-8, but hit shots that were untouchable and went to deuce almost every game.

Natalia, Bella, Maggie, and Grace have never played singles before and I have never been more impressed at how they played!

In Girls Doubles: Bella Scaff and Esther Buckingham were having a neck in neck match but had to forfeit but were winning 4-3. Grace and Maggie dominated a junior and senior with a win of 8-1! Making such calculated shots that left the players in awe, what communication and chemistry.

In Boys Singles: Grant lost his 1st match 1-8. Liam Walsh lost 1-8. Jack Stephens lost his match 0-8. Andrew Dorsey took a win 8-1 in his 1st match and his 2nd match he had such a comeback. Down 2-6, winning 8-6! He moved on to the finals for singles! They all had incredible shots and played the best they have all season. I thought, “Wow, that’s my team.”

In Boys Doubles: Jack Stephens and Liam Walsh had a loss of 3-8, but as always their slices, net game, and communication gained them those 3 games respectfully (which those they lost against and gained those 3 games were dubbed the champions the next day).

Andrew Dorsey and Grant Osgood, played a very stressful game, well for me it was. They had quite a lead but Mill Springs made a comeback tying us 7-7. Which issued a tie breaker. We took the W winning in the tie breaker 7-3! 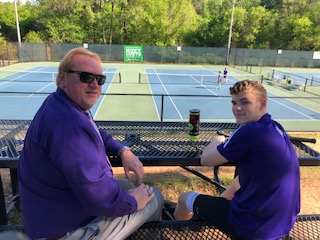 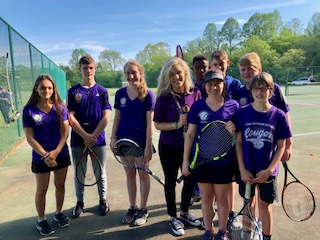 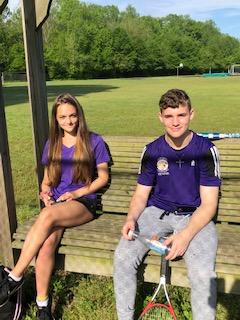 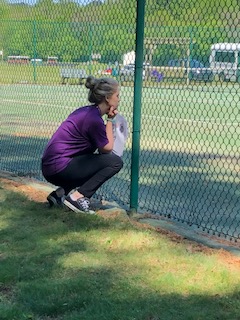 Wednesday, April 24th at Mill Springs Academy we face for the final championship! We were blessed both days with incredible weather!

First on the courts were Andrew Dorsey. This match was one for the books. Andrew always carries himself with such poise and never allows his opponent to get in his head, and his opponent was far from respectful and most players would have allowed this to get them down- not Andrew. Each shot being calculated was a unending rally. They tied their game 7-7 which resulting in a 7 point tie breaker. Andrew gave EACH point his all and WON 7-2 becoming AAC Boys’ Singles Champion!!! 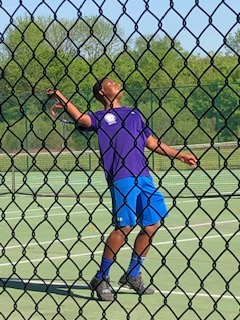 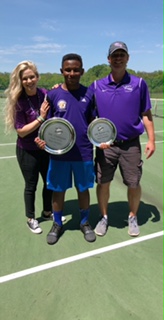 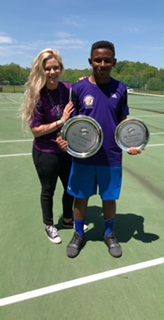 On the other court we had to finish out 1 left over match from Semi Finals. Grace Williams and Maggie Kiesel. They lost in their semifinals match 1-8. But worked so well together with being tough both mentally and physically.

To then determine the runner up and champion for Girls’ Doubles, Natalie Yager and Katie Fair started their doubles match. They both took the court with such poise. With beautiful plays they were strategizing and working together magnificently. They listened to ever word that I spoke and encouraged each other in every point. They were on fire out there and how beautiful it is to see doubles working together as a team planning ahead and taking advantage of their opponents weaknesses. They lost their match 3-8 and gained Runner Up for Girls’ Doubles! 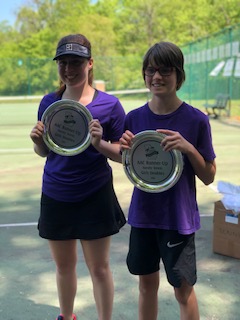 For the runner up and champion match for Boys’ Doubles, Andrew Dorsey and Grant Osgood took the courts. Their opponents had such quick and powerful serves and they both gave it their all but lost 1-8 gaining the Runner Up for Boys’ Doubles! 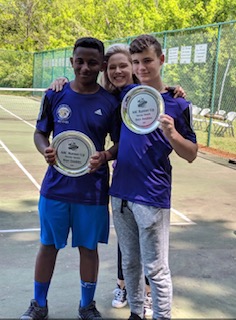 Senior Natalie Yager played her final singles match. She had a mission and exuded such mental ease. She has played this opponent 2 years in a row for this title and had an individual goal and accomplished that personal goal. Natalie is tenacious. If you have ever seen her play you know she gives it her all. She’s competitive, but respectful. As a coach she never gives up and shows you at every practice that she will do whatever you say and not stop till it is perfected. She lost her match 1-8, but she gave it her all each and every point! She gained the title of Runner Up for Girls’ Singles! 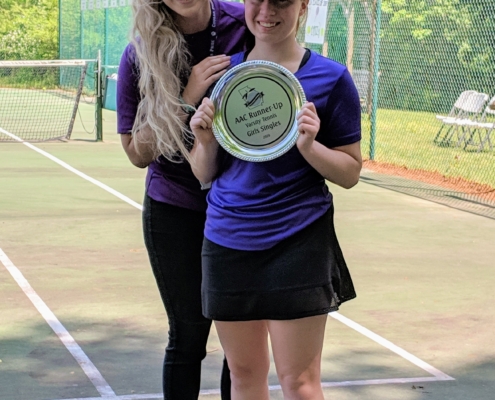 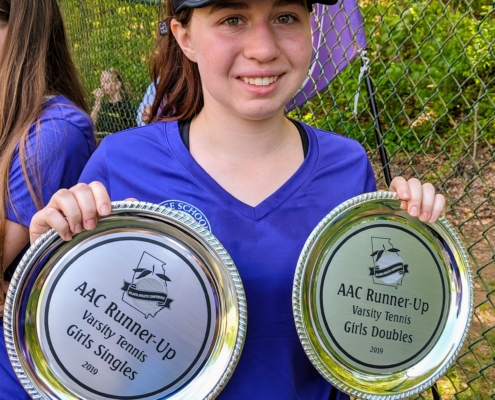 I have gone through many emotions. A team of new comers and mostly middle scholars, it truly is beautiful seeing the improvement and growth. Every team we played were floored at how well these middle scholars and new comers carried themselves both on the courts in their tennis game and in their attitude towards everyone. I am BEYOND proud of how this season went. 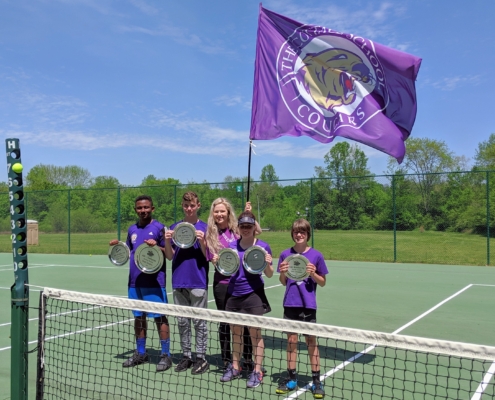 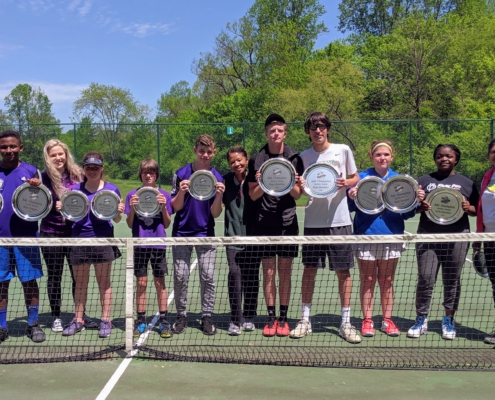 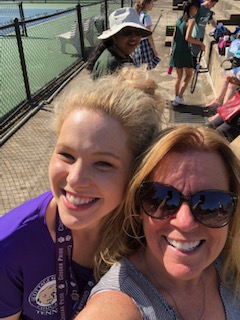 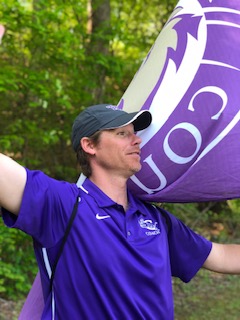 Thank you all for your support!

A special thank you to Brenda Hall, you went above and beyond to be there for me every single match and guiding me through my first year coaching.

Richie Briggs our amazing AD, thank you for answering my millions of questions always.

Ivan Plastiak, thank you for jumping in to support me my first few weeks in attending practices and always being eager to do anything you could to help!

Lyle Cutchin, thank you for being the home to all my tennis meetings and locker room for my players’ belongings.

Thank you Michael Byman for giving my team your time to guest coach this season. Sharing your journey and knowledge with the kids really meant a lot.

And thank you Steve Palmer and Laura Finnell for coming to support us during our finals and sharing that Cougar Spirit!