The Cougars played four games since the last write up. They played Tapestry on 3-7, Mill Springs on 3-8, Atlanta Area School of the Deaf on 3-15, and Cumberland on 3-16.

The Tapestry and Mill Springs games were played in high wind, cold temperature, and rainy weather. This made it hard to keep stats, but it didn’t slow down the Cougars.

The Cougars showed off their offense in the rain against Tapestry. Blake Lackey had trouble getting used to the rain on the first series but got comfortable with the wet ball quickly. He had 4 passing touchdowns to 3 different receivers. Daniel Byman had 2 TDs, Aidan Briggs had 1 TD, and Ben Johnson had 1 TD. However, Blake wasn’t just throwing the ball all around he also caught a touchdown pass from Braden Kramer. Jack Kane had another great game at center. It took him a series to get used to the wet ball as well. However, after that he snapped and blocked well all game. Jack also made a huge 4th and 5 catch to give the cougars a first down and a chance to score before half time. The weather proved to be troublesome for the cougar’s extra point plays, but Braden did make one 2 pt conversation reception in the back of the end zone.

The Cougars defense matched the Cougars offense. The Cougars did not slow down because of a little rain, and they locked down the Tapestry Offense all game. Bryce Dickerson was in the quarterback’s face and didn’t let him throw one ball with set feet. The Quarterback had to throw the ball on the run and with Anthony Kovach and Alex Hogg playing tight, lockdown defense on the Tapestry receivers they didn’t have much of a chance. The Cougar’s stout defense only allowed one touchdown all game. This defense along with the offensive explosion gave the Cougars a 32 to 6 win.

Player of the Game was Ben Johnson. He made some huge catches on offense, a couple of them were toe drags on the sideline to stay in bounds. He also played a great game on defense not allowing any receptions against him.

The Cougar’s JV team was up first against Mill Springs and the elements. The weather was not friendly in this game. It heavily rained all game, and the wind wasn’t letting up either. The wet and cold weather or football weather as I like to call it was not going to hold back the JV squad.

The JV offense was led by 8th grade Quarterback Maxwell Lagan. Maxwell started the game out on fire going 4 for 4 with two touchdown passes. He threw one to Jack McGrew and another was a short pass to fellow 8th grader Eric Tepper who made a short pass into a long touchdown run. Jayden Bryant was next up at the quarterback spot. Jayden went 4 for 7 and had three passing touchdowns. One was to Jack McGrew and two were to Maxwell Lagan. The rain caused trouble in the extra point department, but Colin Barlow did make a 2 pt conversation early in the game.

The Jv Defense didn’t make it easy for the Mill Spring mustangs. Heavy blitzing from Reese Silverman, Jayden Bryant, and Colin Barlow never let the Mill Springs Quarterback feel comfortable. When Mill Springs did throw the ball, the pass was deflected by Reese or Nick Elliot. Also, Eleanor Gaffneystone and Hayden Crosbie played good cover defense. Eric Tepper came up with a big interception while Mill Springs offense was starting to click. Jack McGrew had a big game at the safety spot and is start to merge as a leader of this JV defense.

Player of the Game Eric Tepper One receiving touchdown, one interception, and a few tackles.

The weather didn’t let up after the JV game. If anything, it got colder, and the rain just continued to fall. The varsity offense started out strong with Anthony Kovach starting at quarterback for the first time in his flag football career. Before the game Coach Michael and Coach Jamal talked to Anthony about the weather and about how there was going to be mistakes because of the slippery wet ball. Well, Anthony responded by putting on a show. First start at QB and he came out throwing. He had three passing touchdowns to three different receivers. The first TD was to captain and Mr sure hands Aidan Briggs, the second TD was to Mr speed Daniel Byman, and the third TD was to king of the routes Ben Johnson. Braden Kramer and Ben also added 2 two pt conversion plays. The rain didn’t hold back this cougar offense.

On defense the Cougar’s came out firing on all cylinders. Anthony Kovach and Aidan Briggs came down with two big interceptions. Anthony returned his for a TD (I know big game for the kid!). Alex Hogg, Ben, Daniel, and Anthony played locked down defense on all Mill Springs receivers. Aidan Briggs played the safety spot beautifully and was always there to support his teammates against the deep ball. Bryce Dickerson again coming through big time with relentless effort blitzing the quarterback. This defensive effort was so strong that they only allowed one touchdown against them. 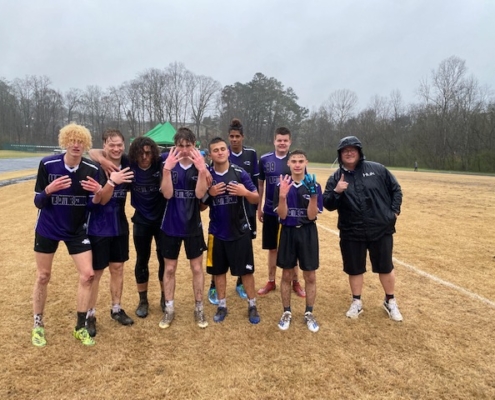 Player of the Game Anthony (3 passing TDs, one interception/returned for TD)

The Cougars traveled to Atlanta to play AASD. The Cougars thought it was going to be the third game in a row in the rain, but mother nature decided there would be no rain today. Anthony Kovach started at QB and took advantage of a dry day. The long, deep ball is here to stay for the Cougars. Anthony was throwing the deep ball to perfection on this day. He had a 40-yard dime to Braden Kramer for a touchdown. He also threw two more touchdowns before the half was over. Ben, Aidan, and Braden had great games at the wide receiver position. They were running crisp routes and leaving AASD defenders in the dust. The great blocking by Jack Kane, great throwing by Anthony, and great route running by the receivers gave the Cougar offense 21 points!

Since the offense was firing on all cylinders the defense knew that if they did their job then they had this game in the big. Bryce was blitzing the AASD QB all game and never let the quarter back feel comfortable back there. Bryce only got one sack but hurried the quarterback every play, making it almost impossible for AASD QB to make any plays for his team. Also, that one sack was for a safety (1st safety of the year). Alex, Ben, and Braden played lock down defense and didn’t let the wide receivers of AASD go anywhere. Aidan had another wonderful game at the safety spot. He is flying around the whole field and really being that helping hand to his teammates when they need it. Anthony, after playing QB so well, came over to the defensive side ready to work. Anthony intercepted AASD’s pass and returned it for a touchdown. What a day for Anthony, 3 passing TDs and one defensive TD.

The Cougars high power offense and defense led the Cougars to another victory.

Player of the game Anthony Kovach

The varsity Cougars played a game against Cumberland at home on 3-16. The first half the Cougar’s offense put on a show. Aidan Briggs, Ben Johnson, and Alex Hogg all had a receiving touchdown in the first half. Aidan and Alex also both had a catch for 2pts (the extra point play after a touchdown). Braden Kramer did not score a touchdown, but he had another great game and another deep grab. Anthony Kovach was starting at quarterback, and he had the best 1st half of the year. Anthony threw the ball 13 times in the first half and completed 12 of them. Anthony kept this going by going 6 for 6 at the beginning of the second half. Altogether, he was 18 of 19 with 5 touchdowns. In the second half Jack Kane moved to wide receiver and he ran a great route and caught his first touchdown of the season. (he also made the 2pt conversion catch after the TD too)

The Cougars defense, like they did all year, did not slow down. They locked Cumberland down all first and second half. The Cougars only allowed one touchdown against them. Alex, Anthony, Braden, and Ben locked up the other team’s receivers all game. Aidan played safety to perfection and was there any time his teammates needed him. Aidan broke up every deep pass and made some big tackles!

This game also saw Jack McGrew and Nick Elliot getting some well-earned playing time. Both gentlemen are on the JV team, but they have been working really hard and playing really well. This earned them a spot on the varsity team. They both did a great job when they got into the game. I know if they keep working hard that the future for these two athletes and for the flag football team is bright.

Player of the game Jack Kane

Score of the game TCS 36 Cumberland 6.