2/4/21: The Cottage School Cougars travelled to Acworth to take on the Furtah Preparatory School Falcons. Furtah is well known for their perennial GISA powerhouse teams, with close to a handful of state titles and just about make the final four each year over two decades. The last time these two teams met was the infamous 2012 Furtah Christmas Tournament, where Cottage earned arguably their biggest upset in history handing the Falcons a 74-72 loss. That TCS team went on to win 20 games and finished with their fourth AAC title. This year’s Cougars are having another successful season but on this night Furtah was not going to allow for such a Cinderella victory. The Falcons size, speed, and physical pressure was too much for Cottage in the 77-34 loss.

The Cougars battled well early competing evenly for most of the first period. Furtah led just 15-13 with .47 seconds remaining, but three costly passing errors in a row by Cottage gave the Falcons high scoring chances. All three were versus the full court press and each one resulted in a steal and layup ending the frame with a 21-13 Furtah edge. Coach Briggs spoke during the break, “That hurt. Up to that point we broke their pressure well, competing evenly. Suroy and I are proud of the boy’s performance but we cannot make costly errors like we just did that final minute. Furtah is too good to hand them quick points.”

Unfortunately for the Cougars, they went eight more minutes unable to break that pressure and the Falcons finished with a 30-4 run to take a 45-17 halftime lead. TCS fixed the issue at intermission but it was too late. The deficit was too large to overcome and were unable to maximize scoring opportunities. Furtah went on with the 77-34 victory.

TCS is now 2-3 in region play and will have one more chance versus Furtah on 2/9-Tuesday night. Before that matchup Cottage will have their final road game tomorrow night at Brandon Hall (GHSA).

Aidan Briggs was the only consistent scorer for his team. He put in 17 points, had 6 rebounds, and dished out 3 assists. 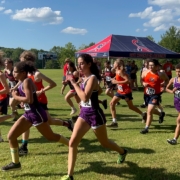