11/12/2021: The Cottage School Cougars took to the hardwood for another home contest versus Covenant Christian Academy Rams. Covenant plays in the GCAA and the two have a great respectful relationship and look to play each other each year at least once.

The Rams are in a rebuilding phase right now while the Cougars are a veteran group of 9 seniors, who most have now played together for three straight years.

TCS displayed their intense defensive prowess and Covenant had no answer. With each pass, Cottage swarmed the ball and were in position on the weakside of the court to pick off long passes. The Cougars took advantage and held a 24-9 lead at intermission.

The second half was no different and Cottage cruised to a 55-27 win. TCS had three different players score in double digits, proving how well they moved the ball. The team also gathered 32 steals, which broke a school record for most team steals in a game. The previous mark was 24, last done in 2015.

TCS will wrap of the week with their fourth contest at State Farm Arena on Sunday. The Howard Hawks are hosting the Cougars in a battle of the Court of Dreams in Atlanta.

Aidan Briggs put in 12 points, 4 steals, 2 blocks, and 7 boards. The high note for him is he became the third Cougar in history to score over 1,000 points. With his first basket in the first period, Aidan reached the milestone. The last Cougar to accomplish this feat was AJ Farrar in 2013. Omari Anderson (2010) is the only other and he has the school record of 1,185 points.

Braden Kramer had another solid night. He scored 5 points, had 4 steals, 4 boards, and 3 assists.

Jack Kane played huge in the paint picking up 8 rebounds. 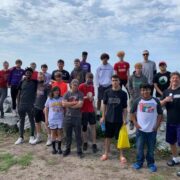 Lady Cougars Erupt for Victory vs. Atlanta Area School – 44 to 26
Scroll to top