Good morning sports fans!!  Your young and feisty Cougars welcomed another cat to the Cougar Den yesterday, the fighting Panthers of Brandon Hall.  The Panthers are coached by Eric McAfee and Will Long.  Both coaches have been around the AAC and GISA landscape for many years now and are two of the good guys in coaching.

The game yesterday was all about developing confidence.  For the magnitude that were there, I am sure they saw that confidence developed.

In the first inning Junior pitcher Shane Hendrickson struck out the first two batter he faced.  After an error put the next batter on, the cleanup hitter for the visitors placed  a perfectly  pummeled pellet into left field scoring the runner.  Shane then stuck out the next batter to end the inning.  At the end of one half inning of play, TCS 0, Panthers 1.

The bottom of the inning saw the Cougars fight back as leadoff hitter Larry Orsini got on base with a single.  Junior shortstop Seth Goldberg then grounded into a fielder’s choice resulting on Orsini being forced out at second with Seth now on first base.  Junior Shane Hendrickson then laced a single putting Goldberg at second and Hendrickson at first.  Unfortunately the next two batters stuck out ending the threat.  At the completion of one complete innings of play.  Cats 0, the other Cats 1. 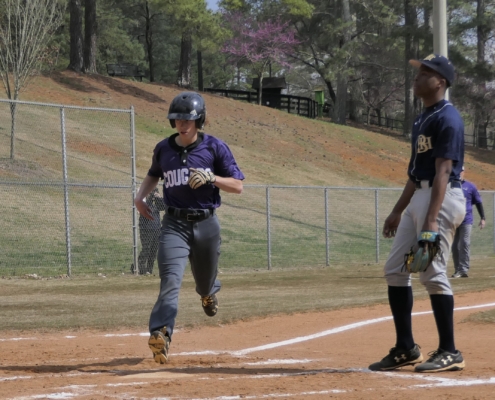 The second inning for both teams produced no runs so on to the third.

In the top of the third inning starting pitcher Hendrickson again stuck out the first two batters.  The next batter for the blue clad visitors then laced a solidly stuck double to left center.  Next up was the catcher who also send a shot to center scoring the runner from second.  The third out of the inning was a result of a sterling defensive gem turned in by Junior right fielder DJ Donaldson.  The fifth place batter sent a softly hit fly ball into right field.  Donaldson, using incredible speed,  came charging hard and made a sensational diving catch flipping end over end cartwheeling out of control, twisting, turning, body parts seemingly about to fly off with the torque of the dive with almost NASCAR like violet movements. OK, it may not have been that dramatic but in my eyes it was.  Anyway the catch ended the inning and prevented any further scoring by the visiting cats.  Score now The Good Guys 0 and the other guys 2. 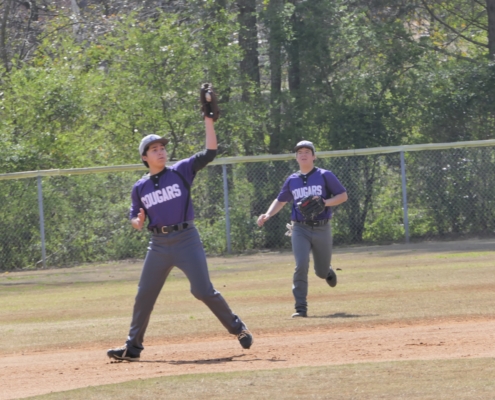 The bottom of the third inning Orsini led off and got on base via an error then stole second.  The next batter stuck out which brought Junior pitcher Shane Hendrickson to the plate.  Shane hit a fly ball that somehow was dropped by the left fielder.  The result was Orsini scoring from second and Hendrickson at second.  Shane then stole third and eventually scored on a pass ball.  The inning ended with the score.  Home standing Cats 2 and visiting Cats 2.

In the fourth inning Junior Seth Goldberg relieved starting pitcher Shane Hendrickson.  Seth struck out the first batter but a dropped third strike put the runner on base.  Two errors put runners at each base.  This set up the play of the inning.  While facing the next batter sensational Senior catcher Brett Boyles perfectly blocked a pitch in the dirt but it trickled away from Brett.  The runner at third being aggressive then took off for home.  Inexperienced pitcher Seth Goldberg then did his job and covered home while Brett retrieved the ball and threw perfectly to the waiting pitcher who tagged he runner out at home trying to score.  Seth then calmly struck out the next two batters again shutting down the GISA powerhouse and keeping the score 2-2. 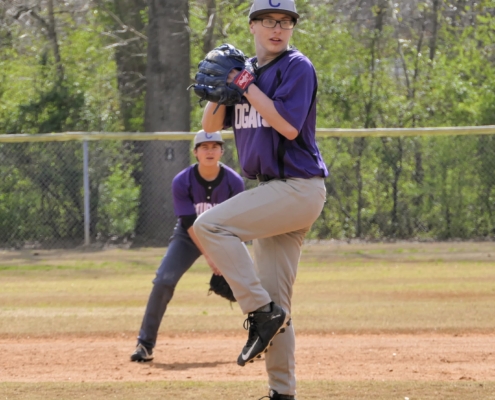 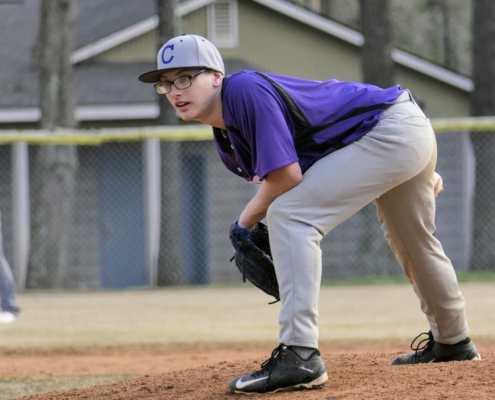 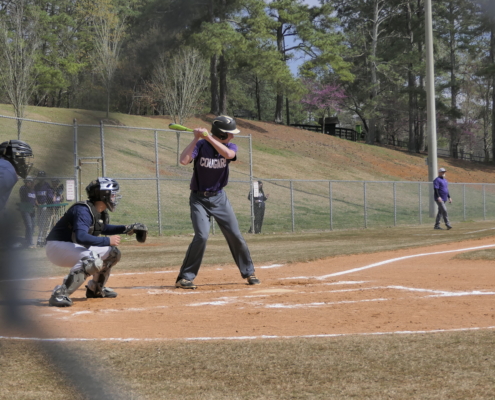 The fifth and sixth innings were scoreless keeping the score 2 to 2.  (See how I changed up the score?  Very subtle wasn’t it.)

In the seventh inning the Powerful Panthers broke out the war clubs and ended the Cougars quest of knocking off the visitors.  The Panthers scored three runs in the top of the inning on two hits and a couple of errors resulting in three unearned runs to secure the victory for the visitors.  When the dust had settled the final score was Purple Clad Cats 2 and the Blue Clad Cats 5.

This was the second complete game seven inning game played by the Cougars this year.  Experience like this will only result in more experience for our younger players and more opportunities for our upper classmen to display leadership.

Join us for Spirit Night at Wild Slice Pizzeria in Roswell

Cougar Tennis meets up with Mill Springs
Scroll to top