Dateline – Druid Hills, Ga.  What a difference 48 hours and a practice can make! On Friday evening the Lady Cougars exorcised the demons of their lopsided loss to AJA, and made school history, as they secured their first ever triumph against a member of the Georgia High School Association.  The Lady Cougars escaped with the narrowest of one point victories against Cross Keyes High School.  The Cardiac Kids of Cottage pulled out their win on the strength of a last second shot by veteran senior Maria Knezek.  Before relating the ins and outs of the final five frantic seconds, let us hit the rewind button and set the stage for the game clinching play. 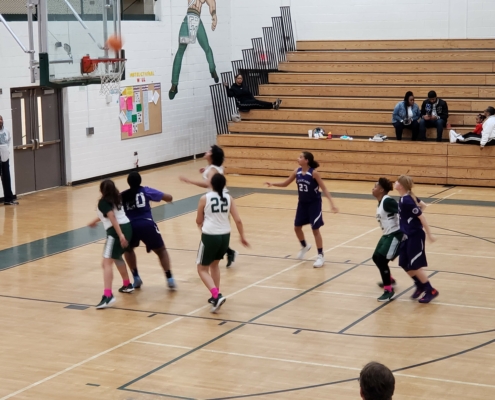 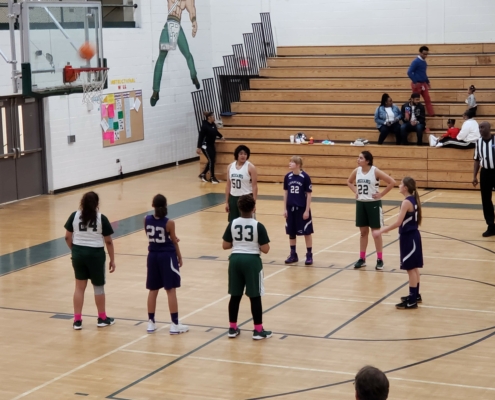 Cottage started the game by winning the opening tip, and advancing the ball into the Lady Indians territory.  After an offensive miscue, both teams traded possessions before Cottage lit up the scoreboard first.  TCS secured an early four point advantage, but the Lady Indians finished with a stronger last three minutes to claim an 8 – 6 lead to close out the first frame.  Eighth grader Alyssa Briggs came out firing, connecting on 4 of her team’s points on the strength of a steal and finish, and a conventional jump shot.  Junior Alex Nebel also answered the call, as she came off the bench to nail a short jumper of her own on an assist by fellow guard Maria Knezek.

In the second frame, the unrelenting TCS pressure defense began to wear down the Cross Keyes backcourt.  Consistently stymied by steals, pressured passes, and hurried shots, the hometown team could only eek out three second quarter points in the face of the TCS defensive assault.  TCS did not exactly counter with an offensive fireworks display of their own, but used balanced scoring to grind out eight second quarter points to claim a 14 – 11 advantage at the half.  During this quarter a dizzying array of Lady Cougars played a tag team approach to filling the “stopper” role on defense.  Knezek, Natalia Hoeve, and eighth grade newcomer Larissa Brient all continually provided harassment to key the defense.  In the second, Nebel, Hoeve, Knezek, and freshman Ana Mills all scored on conventional field goals.  Mills distinguished herself with a highlight reel worthy coast to coast fast break.

Although defense provided the definitive storyline through the first sixteen minutes, both squads picked up the scoring pace in the second half.  The Lady Indians stepped up their passing game and found open players , allowing them to fire in twelve third quarter points.  Cottage struggled mightily on offense, and needed to get rather resourceful to score.  Sophomore Emmi Dillehay got the starting nod for the third quarter, and responded with a big offensive rebound, and follow up.  Knezek shot for her third and fourth points of the game, while swingman Alex Nebel saved her teammates by dialing up two big three point buckets.  As the horn sounded to close the quarter, TCS held on to a 24 – 23 lead.

The fourth quarter provided the forum for a variety of players to assume the mantle of hero.  For Cross Keys, number 33, Jalen who had been shut out for the entire ballgame, came alive with five big points of her own.  For Cottage, Mills drained a free throw and tossed in a regular shot, along with hauling down some critical rebounds.  Brient found herself in the unusual situation of playing in crunch time to close out a ballgame, in spite of only being with the team for two practices.  Knezek dug deep to score six fourth quarter points of her own.  Cross Keyes had the ball with about 1:25 left in the game, and trailing by one point.  They executed their offense, only to find that Cottage controlled the errant shot, and began advancing the ball up the court.  In a mad scramble, Cottage found themselves mired in a broken play, and turned the ball over with about :45 seconds left.  Lifted by the cheers of their fans and spirit squad, Cross Keys converted on a pressured shot to take the lead with just over five seconds left in the contest.  Cottage immediately called timeout and drew up a final play, but somewhat different from the “LINE” play made famous last season.  The referee handed the ball to inbound Nebel.  The quick thinking junior scanned the court, and instantly made the correct read, hurling a one handed football style pass that would make Tom Brady proud.  The pass traveled almost ¾ of the court through the air en route to center Shakirah Wazeerud-Din.  The wiley center out jumped and outmaneuvered her rival to come down with the basketball.  Wazeerud-Din pivoted to her right and put the ball to the floor as she attempted to drive to the hoop for the penultimate score.  Unfortunately for her, a Lady Indian retained sound defensive position and could clearly contest the dribble and any potential shot.  As if an answer to a prayer, Knezek found a way to kick her sprint into another gear entirely, as she outraced everyone, getting from just inside the baseline to stepping just in front of a dribbling Wazeerud-Din.  Sensing her teammate’s approach Wazeerud-Din delivered the perfect pass to a streaking Knezek.  She caught the pass in stride, and used her momentum to carry her to the basket.  Her shot touched off the glass and dropped through the net to the delirious delight of the assembled TCS faithful.

What a finish!  The senior center passing for the biggest assist of her career, and the senior guard connecting on the largest shot of her career!  The team extends their heartfelt thanks to the Boys Varsity and to the many fans who made the long trip.  Your cheers and encouragement lifted us over the hump.

On this night, injuries forced the Cottage squad to rely on an improvised three headed center.  Shakirah Wazeerud-Din and Emma Altermatt both received the starting nod, and helped to establish a physical level of play from the get-go.  Wazeerud-Din did not score on the evening, despite going to the line in the fourth and getting some sound looks at the basket.  However, no one who witnessed the game would overlook her contributions.  In addition to the biggest of all assists, the senior threw back 5 blocked shots, forced a steal, and bossed her way to 9 rebounds, including 2 from the offensive glass.  Emmi Dillehay saw action in both halves.  In a game where every point counted, her offensive rebound / tip in loomed very large in the outcome.  Dillehay’s stat line credits her with 2 offensive caroms.

Alyssa Briggs played a fine game, even logging minutes in the post for the first time this season.  She provided her team with a greatly needed offensive lift in the early going with the previously noted four first stanza points.  She tossed in two more in the all-important fourth quarter on the strength of an offensive rebound.  Briggs swept up a total of 4 offensive, and 2 defensive rebounds, dished the ball for 3 assists, and also claimed 3 steals.

Anna Mills played one of the strongest games of her young career.  Like Briggs, Mills also slide between the backcourt, and the post.  She took the pre-game injunction to rebound to heart as she fought her way to 8 rebounds, including an amazing 5 from the defensive side of the court.  Mills also disrupted the Lady Indians with 2 steals, and shot her way to 5 points.

Alex Nebel, Natalia Hoeve, and Larissa Brient all provided backcourt relief from the bench.  Nebel finished as the GAME HIGH LEADER in points (with 10) for the first time in her career.  To clarify, she had led her TEAM in scoring in the past, but this marks the first time that she led all scorers in a contest.  Again the third quarter loomed large for the junior swingman as the Dr. Strangelovian infatuation with the bomb payed off in spades as she splashed home two three point harpoons during a stretch where the team hit a dry spell.  Proving that she does not function as a one trick three point shooting pony, Nebel did basketball battle with the Cross Keys frontcourt for a long stretch in the second quarter.  For the game, the Nebel stat sheet reveals 5 boards (3 offensive), and a steal.  Hoeve returned to the “scene of the crime,” the site of her season ending concussion injury from last December.  Determined to claim revenge against the gymnasium itself, Hoeve joined in the second quarter defensive assault with verve and elan.  She forced two steals, and on the other end of the court, connected on a textbook eleven foot jump shot.  Newcomer Larissa Brient also logged some unexpectedly large minutes on the strength of her defense against the Cross Keys’ point guards.  She knocked the ball loose 5 times to gain steals.  When not taking the ball away, her physical play and ability to rotate on defense caused further consternation for her white jerseyed opponents.  Brient also earned two separate trips to the foul line, but the hometown gremlins conspired to keep any of the shots from falling through.

Maria Knezek obviously provided the photo finish to salt the game away, but the last second heroics should not distract from a sound body of work that she built over the entire contest.  On the rebounding side, Knezek pulled down 3 offensive, and 2 defensive boards.  She established herself in the passing game, as evidenced by her 3 assists, and she also thieved her way to a game high 10 steals.

TCS takes to the hardwoods again, for some home cooking as they host Midtown Academy next Wednesday.