The 11th annual Atlanta Athletic Conference All Star festivities could not have been any better for The Cottage Cougars and their fans. Here in the friendly confines of the Cougar Center, we had a total of ten TCS Cougars earn a right to play over the All Star weekend. Not only did they all represent their school and jersey well in the games, they also showed out in the skills competition.

Let’s begin with the Lady Cougars. Seniors Maria Knezek and Shakirah Wazeerud-Din, junior Alex Nebel, freshman Anna Mills, and 8th grader Alyssa Briggs all earned the All Star honors. In the Hot Shots competition, where two kids from different schools pair up to score points for made baskets marked on the floor, TCS had a winner. Alyssa and Cymone Rogers from the Howard School were teammates and outscored all their opponents to get to the final. On the other side of the bracket, Maria teamed up with Winter O’Brien from Howard to also reach the final. In the end, Briggs and Cymone made more shots to take home the Hot Shots skills competition award. 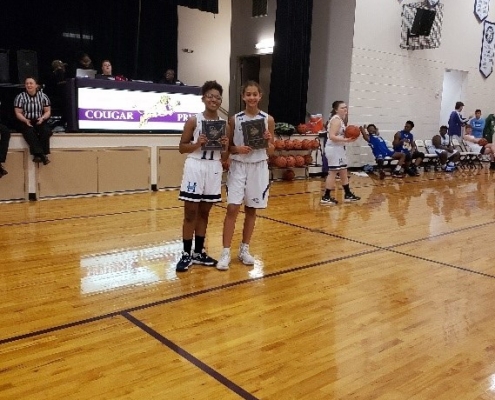 In the 3-point contest, Alex Nebel attempted to go back-to-back as she won it last year. She was defeated by one made three pointer in the first round by Kate Deriso from Howard; who ended up taking home the 3-point trophy as best shooter in the AAC. 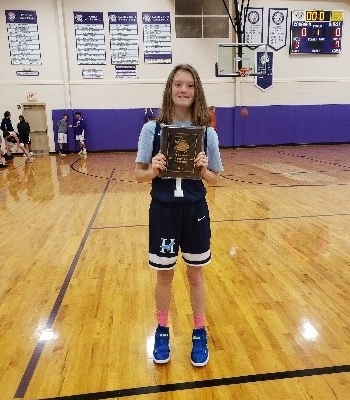 Moving on to the game; for those who missed it, one could not have asked for a closer matchup. The dark jerseys had Knezek and Nebel on the same team and the two of them led their squad throughout. Maria scored her teams’ high of 8 points and had over 10 steals in her last game in uniform, while Alex put in 5 points and was huge on the glass. She came up with several rebounds and defensive stops.

The white jerseys had three Cougars on their side. Shakirah, Anna, and Alyssa. Wazeerud-Din finished her Cougar career with 7 points and several rebounds. Anna did not score, but played solid defense. Alyssa led her team with 14 points and took home the MVP trophy; as just an 8th grader.

Both teams battled back and forth from the jump ball. It was 18-17 white jerseys at halftime, they led again 24-23 after three periods, and with three minutes remaining the score was tied at 25 each. Briggs came through with two big buckets to take a four point edge, but Maria answered to make it 29-27. The dark jerseys had three shots to tie it but none of them went in, Alyssa dribbled around to kill the clock and the white jerseys hung on 29-27. It marked the first time an 8th grader has won the AAC All Star game MVP in the 11 year history of the All Star game. 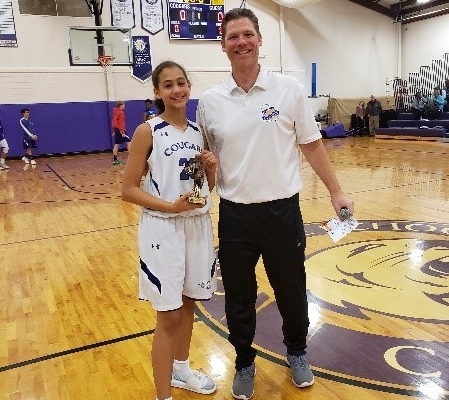 On the boy’s side, seniors Shane Hendrickson and Tim Mattioli earned the honor. Juniors Reese Bentley and Ruslan van Kesteren and sophomore Aidan Briggs rounded up the five Cougars to entertain their home fans. Just like with the girls, we had Cougars take home hardware. Hendrickson was paired with Ryan Refuse from Mill Springs Academy and they outshot all their competitors to claim the Hot Shots skills competition plaques. 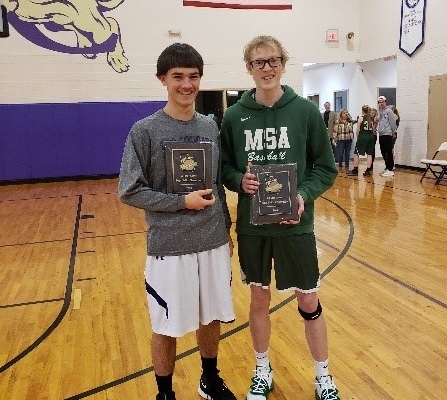 We had two Cougars in the three point contest; Bentley and van Kesteren. Ruslan made it to the semi-final but fell short by one three pointer. Jorden Wilson from AASD proved to be the 2020 AAC 3-Point king. 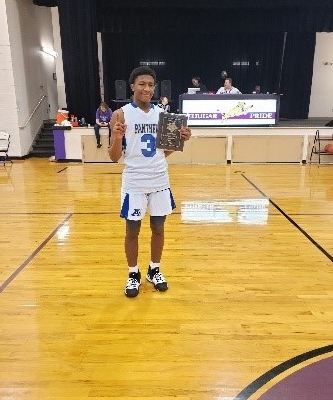 Once again, just like the ladies contest, the boy’s game was even closer. How do you get closer than two points; a 58-57 final! The dark jerseys went ahead 57-56 with just under thirty seconds remaining when Aidan Briggs grabbed an offensive rebound and put back the go ahead a basket. Ahead 58-57 the white jersey team had to make one stop and did, but not before the dark jersey squad had two offensive rebound put backs off target. The ball bounced out of bounds and the possession went to the white jerseys with .3 seconds remaining. They heaved the ball down court, it was touched, and they held on 58-57. At halftime of the boys game there was a dunk contest and Reese Bentley represented the Cougars well throwing down a hard one-handed alley-oop dunk on just one attempt. Your 2020 AAC Dunk Champion! 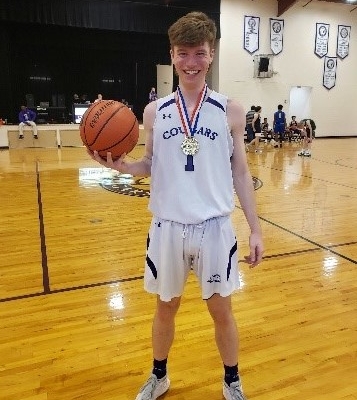 The Cougars showed out, like the Lady Cougars did. If Alyssa did not win the MVP, it would have gone to Maria or Alex. On the guy’s side, Reese also took home the MVP leading all scorers with 21 points.  If he did not win it, it would have been Aidan or Tim. Briggs put in 16 points and hauled down 12 rebounds for a double-double, to go along with 3 steals and 6 assists. He also shut down the dark jersey teams’ top scorer, Korey Bembry, just like he did in the AAC championship game. Korey only scored 7 points. If the dark jerseys had pulled out the victory, Mattioli probably would have won the MVP. Tim led his team with 11 points, had 5 steals, and grabbed several rebounds in his very last career high school game. Every time the white jerseys would get a 6-8 point cushion, he would make a circus lay-up to keep it close. 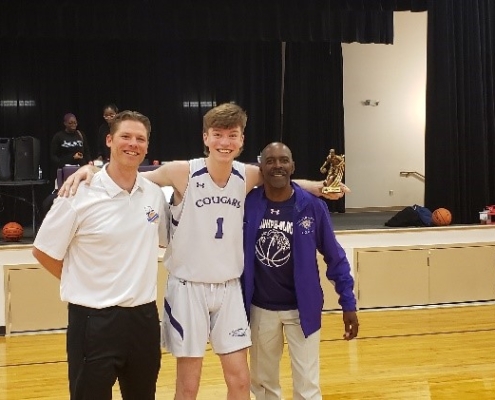 Shane Hendrickson had a strong defensive game, as usual, and knocked down a three pointer to aid his team to victory. Ruslan was on the dark jersey team and was never able to find an open shot because his Cougar coach, Richie Briggs, was coaching the other team and made sure to instruct his defense to not allow van Kesteren to breath. He did record 4 steals and pulled down multiple rebounds. 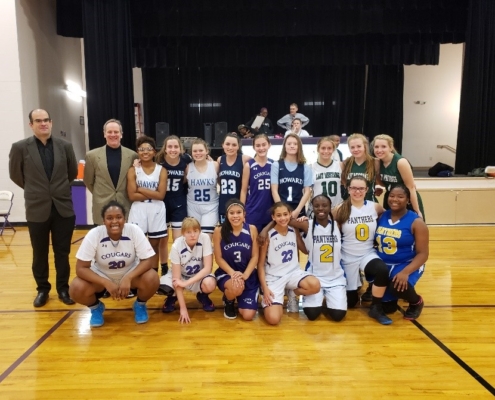 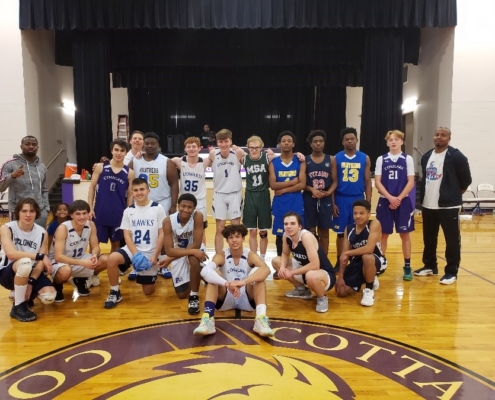 Thanks to everyone who volunteered to work the weekend event. Also, much appreciation to all the parents and staff for providing the food for the hospitality room. Lyle’s chili was a hot topic, along with the yummy burgers. We want to thank Nadine Briggs for the programs and for Jordan Dubrof’s help at the table. Also, current student, Anna Scalf was working hard to take high quality pictures for the yearbook, so thank you Anna.