With springtime, brings rain. It has been a tough start of the tennis season this year with all this rain. But the cougars have toughed out the rain, cold, and wind. TCS played against FSA for the opener of the season Friday, at home. The sun was finally shining, but the wind decided to make its debut as well.

Andrew Dorsey, 8th grade, led a strong advantage in 1st singles against FSA This match was a sight to see, had you on edge the whole time. Sadly, FSA started to make a comeback and secured the win, 6-8. 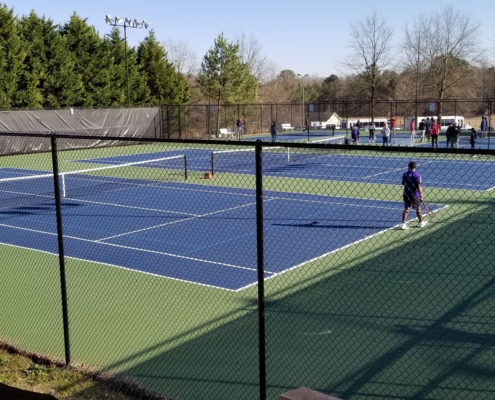 Noah Rosenthal, 12th grade, had some impeccable serves as 2nd singles that couldn’t be touched. The last match of the night, battling the cold winds was not easy for either teams. FSA won 3-8.

Grant Osgood, 9th grade, and Noah Rosenthal, 12th grade; played 1st doubles. With great communication and strategy kept their opponents on edge. Noah with zooming serves and Grant with his intense net game, they were a force to be tried. FSA won 4-8.

Jack McGrew, 8th grade, and Andrew Dorsey, 8th grade, played 2nd doubles. They were a dominate duo! Excellent shots made from both Jack and Andrew; winning 8-0.

Katie Fair, 7th grade, and Bella Scaff, 11th grade, both played again at 2nd doubles against FSA. After a first match warm up, these girls were ready to go! They defeated FSA 8-0.

Despite the cold, both teams played incredible for their first match! Now, here’s to the rest of the season.

Follow Me!
Varsity Cougar Baseball Opens the Season with a Win!