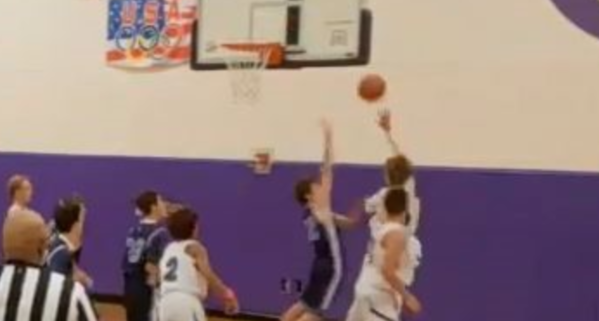 10/30/18: October came to a close and TCS honored those who have suffered with breast cancer, or any cancer for that matter, with a “Pink Out” night for awareness and cancer research as The Cottage School Cougars hosted the Atlanta Jewish Academy Jaguars to begin the 2018-2019 basketball season. Atlanta Academy won the contest 57-44, but much joy and excitement was displayed. Despite losing 21 points per game and a senior who did everything he could to help lead the team last year, Harris Menetre; much of his former teammates are back and ready to prove they learned a lot and can take on the tough task of leading this years’ squad.

Cottage got off to a slow start and it continued to go downhill with missed shots, turnovers, and foul trouble. It appeared the Jaguars were going to run away with the game, up 22 points with just two minutes left in the third period (39-17). After a timeout and some encouragement from each other, the Cougars showed their potential. It began with senior point guard, Murphy Husnik, laying in a timely offensive rebound.  Then newcomer Tim Mattioli stole a couple passes that lead to more points by junior Shane Hendrickson and a nifty give and go from senior, Brett Boyles to Mattioli.  All of a sudden TCS ends the period looking at the scoreboard down just nine points at 41-32.

Unfortunately the minute break was enough for the AJA to regroup. They came back out to start the fourth stanza going back up twelve points 44-32 however, TCS never quit. A couple of sweet assists from Husnik to another newcomer and freshman Aidan Briggs, the Cougars cut the Jaguar lead back under ten points, 50-42.   But with less than three minutes remaining, they ran out of time and had to foul to stop the clock. The Jaguars made enough free throws to matter and put Cottage away 57-44.

A new year is upon the more experienced team from last year so Coach Richie Briggs is optimistic. “Suroy (his assistant) and I really believe this team will be better than last season. We may have lost one of our more athletic players to come through our campus in Menetre, but the bulk of the guys are back and with the added pieces shown tonight we have the potential to be a more complete team and with more depth.”

The Cougars will work on their craft tomorrow in practice and will host Covenant Christian Academy in another non-league contest on Thursday.

#2 Aidan Briggs made a big statement in his first varsity action of his career. He finished with 8 points, 4 boards, and 2 steals. Not sure about history but to anyone’s knowledge there has only been one freshmen varsity player to ever record 8 points or higher in their first game as a freshman Cougar. One of our finest to walk our campus, Chris Taura did it back in 2012. He owns this record recording 9 points, 4 assists, 4 steals, and 4 rebounds.

#5 Murphy Husnik was in foul trouble from the first minute. In limited action he managed to score 7 points and collected 2 assists and 2 steals.

Seniors Parker DeMent and Brett Boyles battled inside. Parker pulled down 7 rebounds with 6 points and Brett had 6 boards.

#12 Shane Hendrickson was a pest on defense recording 3 steals and hauled down 5 balls off the glass.