TCS Cougars do in fact upset the Howard Hawks 46-42 in another come from behind, classic cardiac cat victory! Come turn a green gym into a sea of purple on Wednesday. The girls jump ball at 4:00PM, followed by our boys at 5:30PM at Mill Springs Academy. Both teams will play the #1 seed (AASD Panthers). Their girls have one championship in their history two years ago and the boys are 0-2, looking for their first.

Howard was up 12-5 in the closing minute of period one before Murphy Husnik connects on a three point bomb that we believe opened up confidence for the rest of the team. Down 12-8, TCS outplayed Howard in period two, but the iron was unkind and we missed several layups. The good news was that our boys were executing the offense with patience and precision, so we expected to make those shots in the second half. At the break it was 23-18 Howard. Very similar to the first quarter, TCS was down 23-15 but Reese Bentley hit a three to keep it close. Cottage stayed true to their game plan and won quarter three, 12-10 and now trailed 33-30 going into the final stanza.

Howard scores first to regain that five point cushion but the Cougars answer with two Aidan Briggs free throws. The Hawks again score by their best player (who we had to stop to have a chance), #45 Nicholas Kirk-Brown (did lead all scorers with 23 points). With the score again a five point contest, 37-32, the Cougars catch a break; #45 fouls out. The Cougars did a great job on him, drawing 2 or 3 charges and an on the back call with a great block out from Brett Boyles. He had an earlier blocking foul called so now is out of the game with still 5:39 left in regulation. Without Brown, Howard struggles to handle pressure so Cottage put on the heat. There was some concern here because TCS was already in the bonus so they had to play defense smart, together, without reaching and fouling. 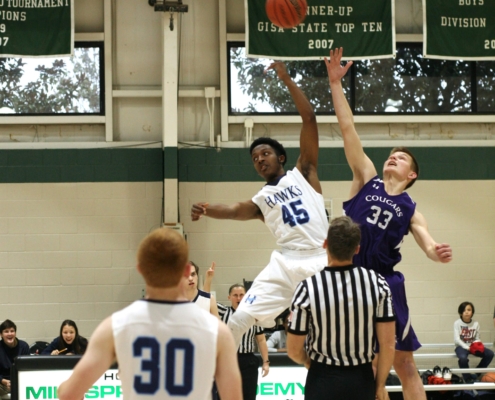 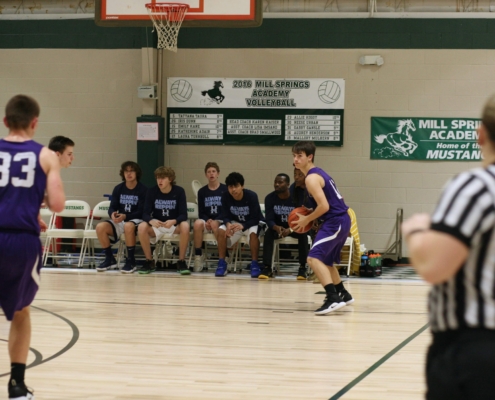 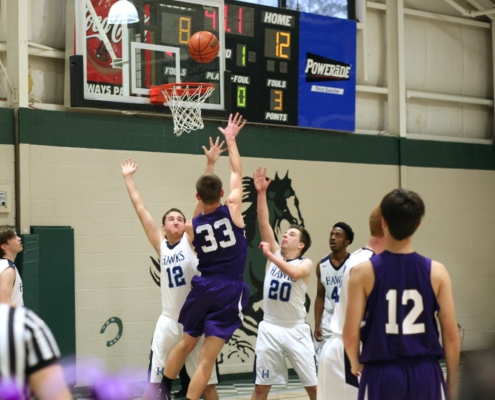 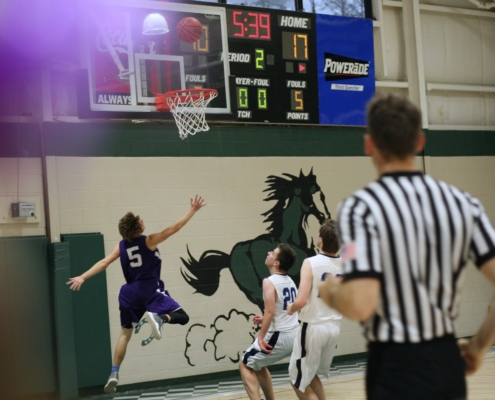 With less than 3 minutes left, the Cougars execute a screen and roll and JV star, Seth Goldberg finds Aidan Briggs for the go ahead bucket! 38-37 TCS. They never looked back.

Howard did hit a three point shot with 2 seconds left to make it interesting (44-42 TCS) but Cottage inbounds the ball and Tim Mattioli is fouled. He connects on two ice breakers and Cottage wins 46-42! They now earned a right for a third try at their 6th title (lost in 2014 and 2017). It is TCS’ 8th AAC championship appearance in the past 11 years (5-2).

Murphy Husnik willed his team to victory. He scores 12 points and had several great passes and effort on defense was outstanding.

Aidan Briggs had several rebounds and also scored 12 points. He connected on 10-14 free throws, which could not be more critical in such a low scoring affair.

Reese Bentley had a strong game with some boards, good defense and scored 7 points.

Brett Boyles led the team in rebounds and scored 6 points.

Tim Mattioli scored all 5 of his points in the second half to go with the two big free throws to seal it.

Shane Hendrickson connected on a three point bomb that could not come at a better time. Cottage was down by 8 points in the third period and it appeared Howard was about to run away with the game. He also was outstanding on defense and for most of the night had to guard their best player (#45).

Parker DeMent came up with some big boards late, including getting fouled that caused Howard to get in serious foul trouble (2 guys fouled out). He scored a point on the line.

Seth Goldberg stepped in a couple of minutes late and played solid defense and made one of the most critical assists in history!

Alex Hoeve came in late for defense and what does he do…with the game a 42-39 TCS lead and Howard had possession, Hoeve steals the ball (I was screaming “Bird steals the ball” like the Boston Celtics commentator did back when the Celtics upset the Pistons in Game 5 of the Eastern finals in 1987) as soon as it happened. This allowed for a Howard foul and two more made free throws from Aidan to go ahead 44-39.

Thank you to all the family and friends. Your cheers were amazing and we needed every yell!

See you Wednesday and go Cougars!

Midnight Strikes for the Cinderella Cougars – AAS Outlasts Cottage in...
Scroll to top