Dateline: Roswell. Ga – After more than a week away from the game, the TCS Lady Cougars reassembled with the task of engaging in basketball battle with their oldest rivals, the Lady Mustangs of Mill Springs Academy.  “Our first practice back seemed quite rocky,” explained Coach Tasha “which we expected, but we emphasized the absolute need to approach this game with focus and seriousness from the opening tip.  Obviously the ladies took the pep talk to heart.”

After a miscue on the opening jump ball, which no player touched, MSA gained the first possession, but promptly ran into a defensive brick wall.  After trading a few possessions without scores, Brandy Michelle Finnell got her team going with a beautiful and one finish.  After receiving a pass into the post, Finnell took a strong drop step to the hoop, banked home the shot, and absorbed a blow from a green defender.  Buoyed by their first score, super sub Alex Nebel contributed some late first quarter offensive fireworks of her own.  A mid-range jumper followed by the team’s first conventional three point bomb of the season gave the home town club some badly needed breathing room as they escaped the first quarter with an 8 to nil advantage.

In the second quarter of play both teams stepped up their defensive execution another notch, while TCS experienced a prolonged offensive drought.  A patented Maria Knezek break away lay-up and a foul shot by Julia Baumohl was matched by a controversial three point field goal credited to Lady Mustang Nya Lewis.  The half ended with TCS maintaining their eight point cushion.

The second half witnessed the most efficient production for the Cougars this year, as the team pumped in 20 second half points on a dizzying array of shots.  Finnell took charge in the third quarter, striking three times from the paint to break the contest open.  Freshman Tracy Li contributed to the growing rout as she recorded the first hoop of her high school career on the strength of a sound post move.  In the final quarter of the game, Knezek took up the scoring torch as TCS experimented with a number of novel lineups, while junior Emily Daugherty added the coup de grace with a hustle bucket of her own.  After four quarters of play, TCS came out the victorious end of 31 – 12 score.

The Lady Cougars take to the road Saturday evening against Al Falah Academy in a non-conference match up. 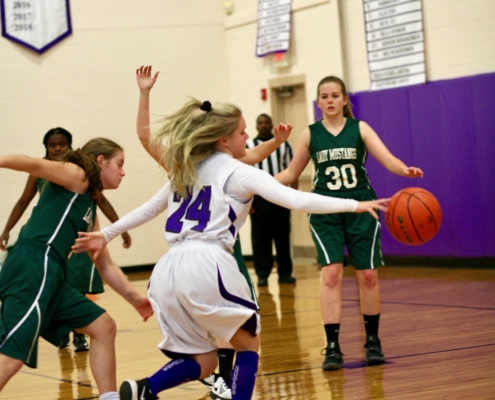 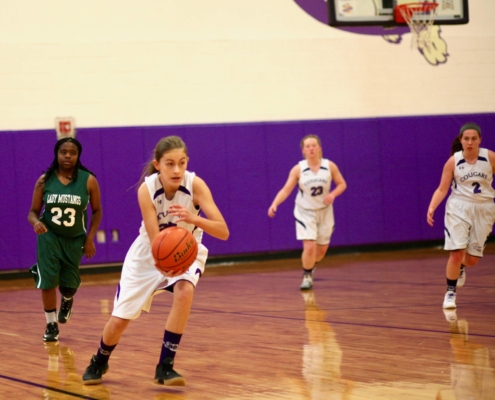 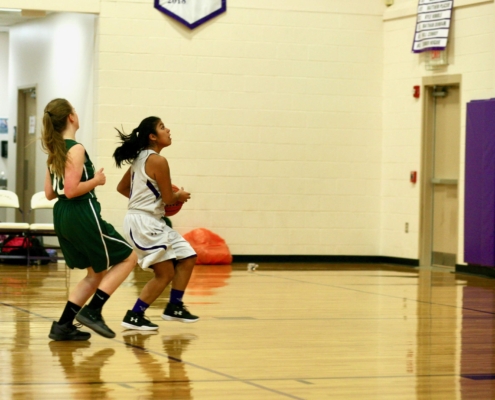 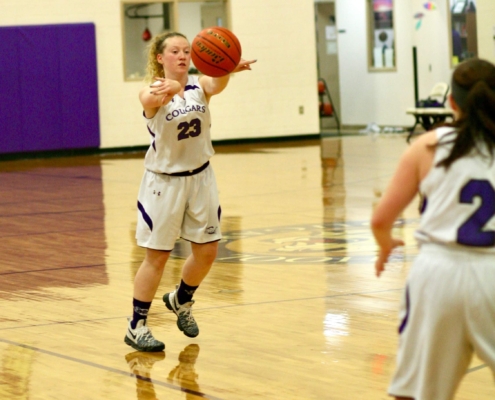 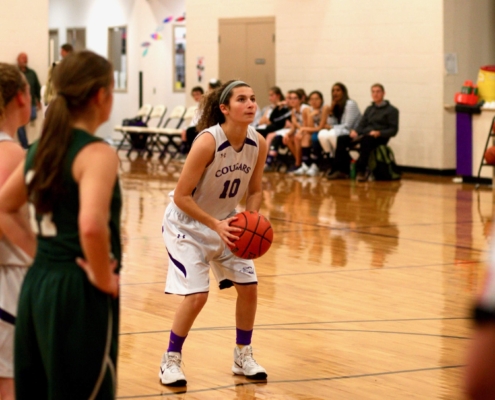 Brandy Michelle Finnell put together her best all-around effort as a Lady Cougar.  Torching the boards for 8 offensive rebounds, and 11 overall, Finnell helped to set the tone for rebounding.  She also gained 2 steals, and scored 9 points from the post, an attack that the visitors never developed an answer for.  The stat line cannot reveal her poise, and ability to slow down which allowed her to make the best decisions with the ball each time.

Julia Baumohl started as the other post presence.  While squeezing off a number of sound shots, Baumohl scored on a free throw, chased down 7 rebounds, chipped in a steal, and generally ran the floor effectively.

In a game where the bench played a large role, Alex Nebel set the standard early, scoring her 5 points in her first stint of action.  Nebel also quarterbacked the team in the fourth quarter, while adding 6 rebounds, 3 steals, and a blocked shot to her total.

Tracy Li provided post relief in the second, third, and fourth quarters of the contest.  One of the evening’s highlights certainly included the third quarter bucket.  Li also added energy on the defensive and of the court, and went to the floorboards continually in the search for loose balls.  She also gathered 2 rebounds, and passed for an assist.

Emily Daugherty entered the game in her accustomed sixth man role, and responded with a most balanced game.  She claimed the second most boards for her team with 9, while also adding 4 points, an assist, and a steal.

Findley Love, Hannah Katz, Maxine Moore, and Analin Merchant rounded out the bench attack for the evening.  Love sized up a couple of jump shots, including a harpoon launched from deep in international waters.   Although she did not connect this time, Love scooped up her obligatory offensive rebound in first quarter action.  Merchant seemed unlikely to play 90 minutes prior to game time, but rallied through her illness to take to the hardwoods in two stints of action.  Moore and Katz helped to maintain the Lady Cougar’s defensive intensity on the perimeter.

The starting triumvirate of guards, Maria Knezek, Natalia Hoeve, and Natalie Yager ensured that the Cougars started the game with the proper level of defensive commitment, and they did not falter at all for the duration of the contest.  Knezek led all scorers with a game high 10 points.  She also thieved the ball 7 times, dished an assist, and gathered in an offensive rebound.  Hoeve got the starting nod for the third time this season.  Although her stat sheet did not overflow with tally marks (1 offensive rebound, 1 assist, and 1 steal), Hoeve’s quick hands and speedy play helped to continually short circuit the MSA attack.  Yager did not score, but turned in another one of her sterling all around performances.  Yager gained a career high 10 steals, hit the boards 4 times, and handed out 3 assists.