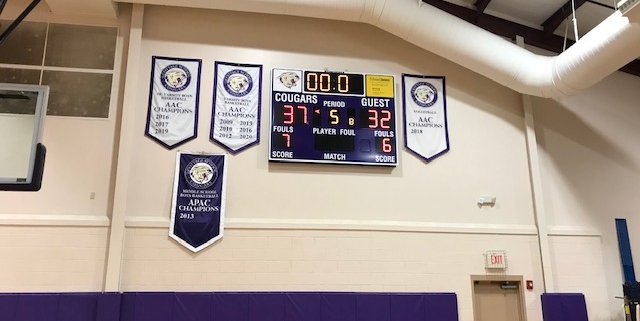 Dateline-Roswell, Ga.  In yet another clash of new found opponents,  the Lady Cougars played hostess to the Stallions of Sugar Hill Christian Academy.  The match marked the first ever meeting between the High School program and the Buford school anchored in the prestigious GAPPS league.  This contest provided a marked contrast with the easy flowing and high scoring affair from Saturday evening.  In fact, one might say that this game more closely resembled an old fashioned rock fight.

Both teams quickly established that defense would provide the storyline of the night.  TCS came out with a determined man to man scheme, while the Stallions looked to implement a matchup zone.  Players from both teams responded by cutting off the passing lanes, warding their opponents away from the paint, and locking down defensive rebounds.  The Stallions recorded the first bucket of the night after FIVE MINUTES of game time elapsed.  Sugar Hill followed up with a second consecutive field goal.  Alyssa Briggs finally broke the ice for her team when she absorbed a foul as she drove toward the hoop, earning a trip to the charity stripe where she converted one of two shots.

The second quarter witnessed an unleashing of each side’s offensive potential. While the defense remained generally strong, the Lady Cougars took full advantage of fast break opportunities, timely offensive rebounding, and some outside shooting to ring up 13 points, as the visitors countered with 12 of their own.  Senior Alex Nebel shouldered the offensive load during this period, nailing 7 points on the strength of the tough leaner, a trifecta, and conventional jump shot.  As the half closed out, the visitors hung onto a narrow 16 – 14 advantage.

The second half of basketball packed in more drama and plot twists than a blockbuster double feature.  Cottage experienced eight minutes of rough sledding as they could not seem to connect on any sort of shot, and as the Stallions repeatedly closed off all access to the interior.  Galya Kysar and Alex Nebel provided the only scoring, while the visitors ground out 11 third frame points to boast a nine point edge going into the final quarter.  Imploring their teammates to dig deeper, juniors Kysar and Emmi Dillehay challenged everyone to lay everything on the table for the last full measure.  Responding to the challenge, the ladies tightened up their man coverage, and worked the ball around in the half court set to find the open shooters.  Surrendering only 2 points in the last eight minutes, Cottage edged ever closer.  Junior Anika Helm got whistled up for her disqualifying fifth foul, allowing sophomore Ana Mills to jump off the bench for some late game heroics.  Immediately Mills connected on a shot from the high post, assisted by a driving Briggs.  Nebel stepped up with another three hoisted from international waters.  Kysar also fought her way to two field goals of her own, and Briggs added her second field goal of the night.  With 15 ticks on the clock and the game knotted at 29, the Stallions inbounded the ball and found their attack stymied by a near steal that pushed the ball out of bounds.  Rallying for one last push, Sugar Hill inbounded and missed the shot.  Cottage regained possession 84 feet from their hoop, but could not squeeze the shot off in time.

With the stage set for the emotional vortex of overtime action, both coaches approached the scorer’s table for the OT coin flip, a concession to Ga. High School Covid standards which negates all jump balls this season.  As the visitors won the toss, both teams took to the floor like prizefighters entering the fifteenth round of a championship bout.  Amping up their defensive efforts to manic proportions, Cottage extended their man defense to pick the dark jerseys up even further from the basket.  While Sugar Hill eeked out three overtime points, Cottage witnessed four players combine for eight to salt the game away.  Nebel followed a missed shot with a half hook shot from under the basket, Mills hit another shot from the high post, Kysar connected on a breakaway layup, while Briggs and Kysar both connected on free throws.

Coming away with a win in a game where the team faced a fundamentally sound and defensive minded foe, experienced a significant deficit, weathered the disqualification of a starting center, and endured to finish a physical overtime, represents a huge step forward for the 2020-2021 edition of the Lady Cougars.  Truly this is game that fans, players, and coaches will treasure for years to come!

With a very short bench, sophomores Celeste Jeoffroy and Ana Mills represented the relief factor for their teammates.  Jeoffroy logged a cameo appearance in the first half to protect Helm and Dillehay when they edged near to foul trouble.  Spent by her near wire to wire performance in the MS contest, the coaches opted not to abuse their center with excessive play for the evening.  Mills filled the swingman role for this game, shuttling between the front and the backcourts.  Her two baskets (scored in the fourth and in the overtime) came precisely when her team needed points the most.  Mills also scooped up 7 rebounds (3 offensive), and threw her body across the court with reckless abandon.

The starting post players may not have filled the stat sheet with tally marks, but anyone watching the game with a critical eye could not miss the impact that they impressed upon the outcome.  Matching up against a team with imposing frontline players, both Lady Cougars found themselves in tough post match ups time and time again.  They gave up a whole lot of fouls, but more importantly, they denied their opponents the opportunity to finish off fast breaks, and provided enough tenacious individual coverage to force rushed shots, and to force kick outs.  Emmi Dillehay handled inbounding responsibilities, grabbed 2 rebounds, and forced 4 steals.  Her vocal leadership and physical play definitely lifted the team.  Anika Helm pounded the glass with four rebounds, while also passing for an assist, and generating a steal.

Alex Nebel played perhaps the most well rounded game of her TCS career.  Her commitment to rebounding manifested itself with 12 boards, including an eye popping 8 from the offensive end, 1 blocked shot, 6 steals, and a team high 14 points.  True to her Strangelovian instincts, six of the points came as the result of three point bombs.  Not to be outdone, Galya Kysar turned in a similar gem.  Her 12 points propelled the team offensively, while she also hammered home 9 rebounds (4 offensive),   blocked 3 shots, and amassed 10 steals.  On a night when big individual efforts seemed to be the order of the day, freshman Alyssa Briggs threw her trump cards onto the table.  Although snakebit on the shooting end all night long, Briggs still forced the issued on offense, continually taking the ball the hole.  Although scoring only  7 points, she dished out a season high 6 assists.  On the boards, Briggs set the standard for the entire game as she attacked both boards with the aggression of a tiger shark in mid- feeding frenzy. Her 18 boards (8 offensive) represents a school record for rebounds in a game for a true guard.  She also forced 9 steals, and tallied a blocked shot.

The team resumes their home stand next Thursday evening with a 6:00 p.m. date against Atlanta Classical Academy.