Dateline – Clarkston, Ga. The fair state of Georgia served as the site of many epic battles, conflicts that inflicted pain, casualties, and posed the most severe tests of attrition on the combatants.  Our ancestors’ sacrifices at places like the Bloody Marsh, the Siege of Savannah, and the Battle of Kennesaw Mountain call down to us, imploring us to reach the high standard set by warriors in bygone ages.  Thursday, December 11, 2019 will also echo throughout time as the ladies from Atlanta Area School and TCS clashed in an epic struggle now known as the Battle of Clarkston.  This penultimate A.A.C. match of the first semester would determine which squad would lay claim to first place honors as all schools decamp for the winter recess.  From at least 2006 until 2017, AAS owned Cottage, with the Lady Cougars stealing only one game in the winter of 2011.  In the last two seasons, the Lady Cougars rallied, battling their conference foes on relatively even terms, which set the stage for this first battle royale of the season.

The game began in an almost anticlimactic fashion as both teams seemed to hold back, probing each other before fully committing to an assault.  Surprisingly, the Lady Panthers began the game with a conventional zone, rather than jumping out of the gate with their infamous full court press.  Cottage struck first with Shakirah Wazeerud-Din shaking loose on the block to bank home a short shot.  Generally, the visitors showed patience on offense, while gamely executing their defensive sets to slow the vaunted AAS up tempo offense to a crawl.  The only fly in the ointment for Cottage involved transition defense, as the home towners converted on three fast break baskets, accounting for 75% of their scoring for the first frame.  Eighth grader Alyssa Briggs countered with a bucket of her own, as Atlanta Area School closed out the first eight minutes with an 8 – 4 lead. 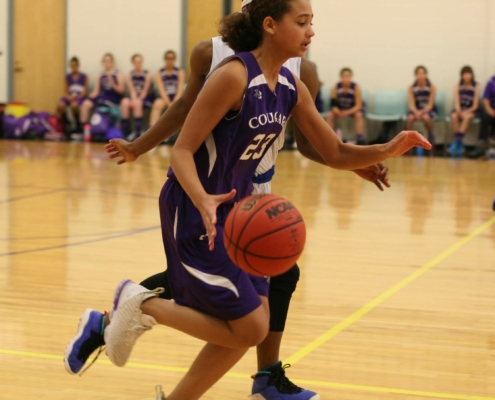 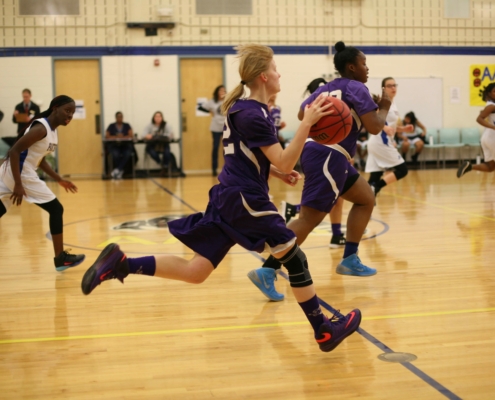 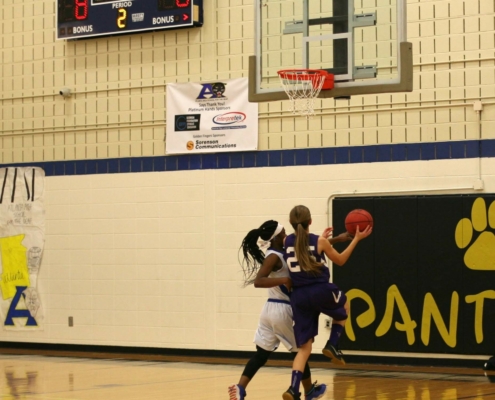 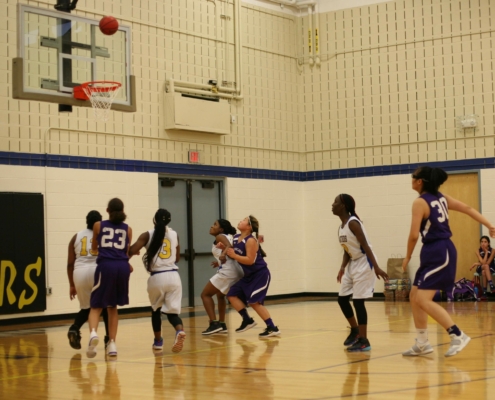 Well aware that the Panthers can hit the accelerator early and pile on points in a hurry, the Lady Cougars came determined to write an entirely different storyline for the second quarter.  By and large they met this challenge shutting down the fast break, but offensive issues plagued the visitors all quarter long.  Despite battling the gremlins in the arena, Cottage did fight for 7 second frame points as the result of some “hero” plays.  Maria Knezek scored on an offensive rebound, and added another hoop on one of her patented “grab and go” plays, as she stripped an opposing guard and finished with a flourish.  Freshman Ana Mills also converted on an acrobatic shot, and guard Alex Nebel rang up a foul shot after pulling away an offensive board.  When the dust settled, AAS held onto an 18 – 11 advantage. 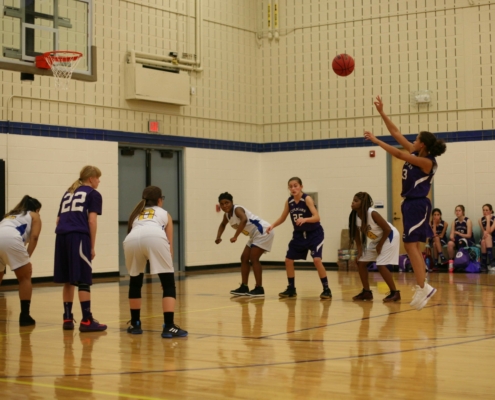 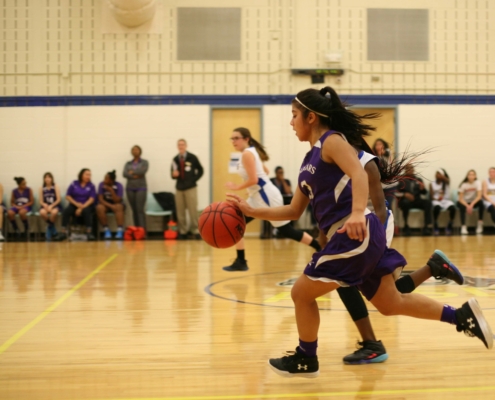 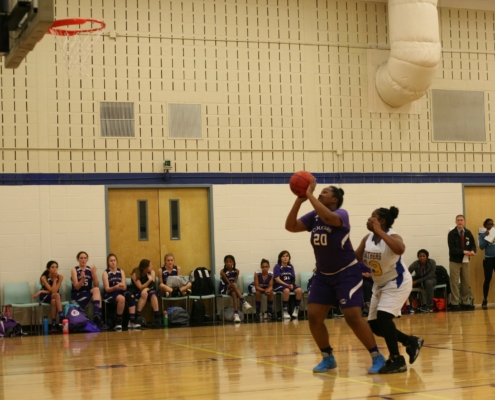 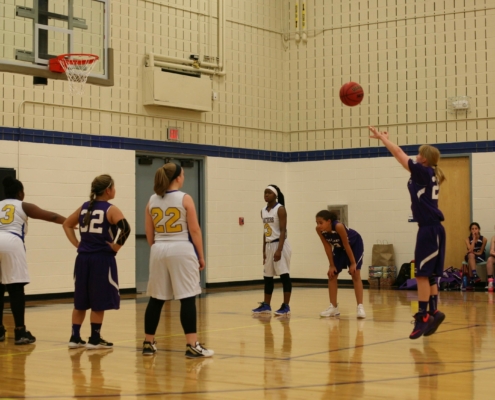 Now battling foul trouble (Wazeerud-Din and Knezek both whistled up for three apiece), injuries, and a seven point deficit, the Lady Cougars determined that the game needed an interjection of something unexpected to shake things up.  That something proved to be the decision to go with a full court press.  The new look certainly unsettled the Lady Panthers who only squeaked out a pair of free throws during the next eight minutes of action.  Cottage responded with one of their most productive periods of the season, lighting up the scoreboard for 14 points.  As welcome as the scoring certainly was, the coaching staff and fans also took great comfort in the play of the bench during the third.  When a quick fourth whistle exiled Wazeerud-Din to the bench, Tracy Li responded in a big way.  Active on the boards, drawing two fouls in the act of shooting, and coming up with two big steals, Li more than played her frontcourt foes to a standstill.  In similar fashion, Emma Altermatt checked in to provide some spot relief at the post position.  In limited playing time, Altermatt established her mettle, as she claimed a steal, and forced her way to an offensive rebound.  Emmi Dillehay continued her active and impactful play from the first half in this third quarter flurry as well.  Offensively, Nebel carried the load for her team as she busted out with the most prolific quarter of her career, blazing away for 9 points, including two three pointers, each delivered from the opposite ends of the court.  As the buzzer sounded, the scoreboard showed Cottage boasting a 25 – 20 lead.

Few, if any observes, entertained the notion that Atlanta Area School would fold up like a cheap lawn chair and let the game run away from them.  Predictably the fourth quarter took on the aura of the fifteenth round of a heavyweight prize fight, as each team exchanged blow after blow.  Perhaps the turning point occurred early in the fourth, when a TCS steal resulted in a transition opportunity for the Lady Cougars.  Knezek controlled the ball in the middle of the court, promptly drawing the attention of two defenders.  With one deft motion, Knezek pushed a picture perfect bounce pass to a streaking Nebel who drove hard to the hoop.  Confronted by a single defender, Nebel finished strong, absorbed the foul, banked home the lay-up, and ended up crumbled up in a heap under the basket.  The injury forced her from the ballgame, and resulted in an immediate substation by Finley Love who needed to take the foul shot for her fallen comrade.  The absence of the “Buckets” Nebel seemed to give the home towners the lift that they needed, as they began to pick up the scoring pace, while TCS settled into a deep offensive funk.  The Lady Cougars did grind out 10 points over the last eight minutes, as Wazeerud-Din, and Ana Mills struck pay dirt, while Briggs chipped in with two fourth quarter shots of her own.  With just over a minute remaining, the Lady Panthers nursed a two point lead, forcing Cottage to foul to stop the clock.  A parade of foul shots allowed AAS to push the lead to four points.  With a little over two ticks showing on the clock, the ladies dug deep one more time for a desperation three pointer.  The shot fell short, and the two exhausted teams staggered off the court, each wondering what the next installment of this rivalry would bring.

The players and coaches all extended their thanks for the large TCS contingent that braved the inhuman traffic to attend the game.  Although the match did not result in a “W” for the purple and white,  the game demonstrated that extensive competition against G.I.S.A., G.C.I.S.A. and G.H.S. programs prepared the Lady Cougars to prowl into the lair of a formidable foe and to battle them  down to the wire.  The ladies showed determination and discipline in not allowing the physicality, the crowd, the officiating, or injuries to distract them from the task at hand.

GAME NOTES
One of the main storylines of this evening revolved around the play of the Cottage School reserves.  Emmi Dillehay impacted the game, particularly from a defensive standpoint in both halves.  In this particular contest the foul situation and the physical play of the opponents really dictated that the sophomore fill the center role.  From the low post, she banged her way to 4 rebounds (2 offensive), handed out an assist, and snuck into the passing lanes to pick up a solid 5 steals.  Dillehay also earned a trip to the foul line in the first quarter.  Frontcourt counterpart Tracy Li also stepped up in a big way, especially in the critical third quarter run. For the evening, Li scored 2 points, both earned from the foul line during the third quarter.  Li attacked the backboards as evidenced by her 7 rebounds (2 offensive), to go with 2 steals, and the previously mentioned assist.  Emma Altermatt provided reserve power in the third stanza as well, chipping in with a steal and a big offensive ‘bound during her court time.  In the backcourt Finley Love and Natalia Hoeve came in to energize the Cougar attack.  Hoeve, made her first appearance since November 5th , when she started against Oak Mountain Academy.  In this contest Hoeve made a late first quarter appearance, getting herself re-acclimated to varsity play.  Love put in stints in both halves.  In the most dramatic entry in recent memory, Nebel’s fourth quarter injury forced Love into the game and immediately onto the foul line in an attempt to complete the and one earned by her hard charging teammate.

Shakirah Wazeerud-Din felt as though she battled the burly front court, and the officials all night long.  In relatively limited playing time, the senior center hit the offensive boards hard, hauling down 5 to go along with 3 defensive rebounds.   She also tallied 4 points, snuck a stolen ball, and rejected two shots by AAS players.

Ana Mills braved a bum knee, and turned in a superlative performance from the high post positon.  Mills scored in the first and fourth quarters on mid-range shots.  She also chased down 2 rebounds, and patrolled the passing lanes for 2 steals as well.

Alyssa Briggs pumped in 9 points, tickling the nets with foul shots, jumpers, and with daring drives to the rack.  Briggs also claimed 4 boards (3 offensive), passed for an assist, and stole 2 balls.

Alex Nebel entered into “the zone” especially in the third quarter, where she shot the lights out, ringing up a career high 9 points in one quarter.  For the game, she led the way for TCS with 12 overall points.  Fans of the trifecta cheered Nebel’s two three point daggers, which she tossed up with Stangelovian abandon.  She also fought her way to 5 rebounds (including 4 offensive), dished an assist, and earned 2 steals.

Maria Knezek found herself pushed under the microscope, as AAS made a concerted effort to keep the ball out of her hands, and to move the ball away from her as she defended.  Game to their challenge, Knezek still patrolled the hardwoods to tally a game high 9 steals.  She also snuck into the redwoods to pull away 3 offensive and 1 defensive rebounds, she intelligently pushed the ball around for 4 assists, and scored 4 points in the “dry” second quarter when her team needed them the very most.