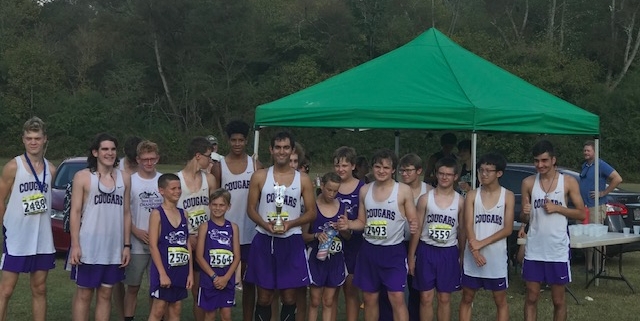 The Cougars visited The Farm Course next to Tallulah Gorge yesterday and placed 9th as a team with a 20:43 average for the rolling 5,000m course which led runners over hay bales and through a “haunted” corn maze.  Individual winners earned pumpkin pies and overall winning teams won world renowned apple pies from the Tallulah Falls Culinary Arts Program.  Larry Orsini placed 9th in 18:14 to garner a top ten medal in the varsity boys contest.  Nick Daugherty placed 36th in 20:12 while Will Conroy kicked with a pack into a photo finish in 63rd at 20:57.  Camden Michaud placed 77th in 22:01, despite battling a painful knee.  Shane Hendrickson earned 79th in 22:10 as Braden Smith paced close behind in 83rd at 22:17.  Nick Helm finished in 97th with a 23:24 as fellow Nick (Smith) kicked into the chute at 23:47 for 101st.  Ben Thomas placed 107th in 25:18 while Alex Hogg earned 113th in 27:09.  Dino Couvaras capped off a great career in Cougar cross country by striding to 114th place in 29:05.

In the Girls’ varsity competition, Grace Marriott outkicked a Rabun County Wildcat for 26th place in 25:29 as Alex Nebel gutted out a finish for 73rd in 31:11 with a persistent pain in her abdomen.

In the boys’ Junior Varsity race, Hunter Cool strode across the carpet for 48th place in 27:01.  Mike Janyska earned 51st in 28:54 as Cal Kinard placed 52nd with a 29:31.  Andrew Marriott placed 57th in 32:49.  Thank you for your support, and remember, the Dyslexia Dash will be our next running’s endeavor as a team this coming Saturday at Perimeter Mall.  The bus will depart from TCS gym at 6:45AM for an 8:00AM race start, and an estimated 10:30AM return to school.