2/11/21: The Cottage School Cougars took on the Mill Springs Academy Mustangs for a third and final time this season. MSA and TCS were the only two AAC schools participating in basketball this season-per Covid so they met at The Cougar Center for one last showdown. Cottage was too much for the young Mustangs and prevailed 53-24. The Cougars captured their 7th championship and in back to back fashion. TCS is already the only school in AAC history (dating back to 1989) to have back to back titles twice, but now they have done it three times. Last year they defeated the AASD Panthers for ring six. TCS did it in 2009 & 2010 and again in 2012 & 2013. No varsity boys AAC basketball team have ever won three in a row.

For many watching this contest you witnessed a complete difference in Coach Briggs’ style. It was almost like they took a piece from the modern-day Golden State Warriors. In the first half they were instructed to shoot from deep and do it often. Coach Richie speaks, “We need to shoot the ball better to compete in the GISA region tournament next week. We were confident our defensive pressure would be too much for Mill Springs so our game plan was to execute our offense but to look for as many outside shots as you feel comfortable.” And did they ever…Cottage let them fly and everyone had a piece of the three point parade.

In the first period, TCS hit on 5-11 from downtown and all from different teammates. They cooled down the rest of the contest but not before three more Cougars, nobody envisioned sinking from that distance, connected. The second stanza had senior Nick Smith swish his first ever 3-ball, followed by one from Daniel Byman. After the bench and bleachers cheered with excitement it still did not prepare the Cougar Center for what came next.

After a long jump shot attempt was blocked but not corralled by a close Mustang, the ball bounced back into Javier Cremer’s hands behind the arch. Without hesitation the senior grabbed the ball and casually drained, also his first ever three pointer. As the gym began to realize what just happened, Javier proceeded to knock down shots all in the face of his defenders for 7 second period points. The energy and joy was out of control. All one could say; it was the Cougars fate this night and they were in some state of euphoria.

The second half could not possibly live up to as much entertainment, but the Cougars did finish with a record 10 three pointers in one game. Of course, they also broke the record for most three point attempts but in a home championship matchup, let’s stick to the ones that dropped.

TCS is now 13-7 overall and have two guaranteed games left in the GISA region playoffs next week. If the rankings on Maxpreps keep Cottage in and around their spot, the Cougars will also make the state playoffs. Currently TCS is ranked 11th in AA and a top 16 finish earns a spot. Cottage will take on the mighty Falcons of Furtah Wednesday, 2/17 at TCS at 5:30 PM in the GISA Region 5AA semifinals. 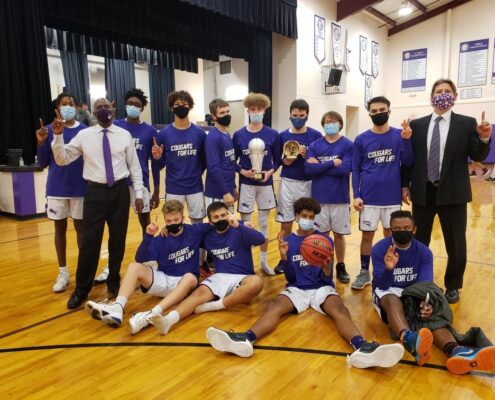 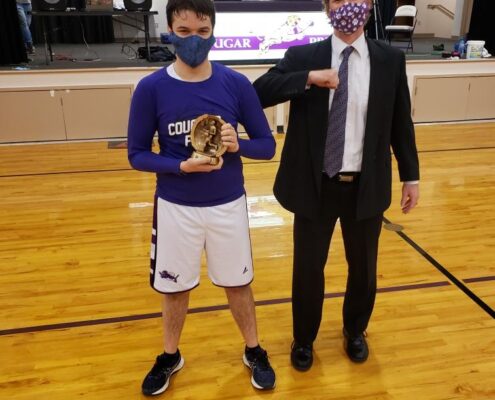 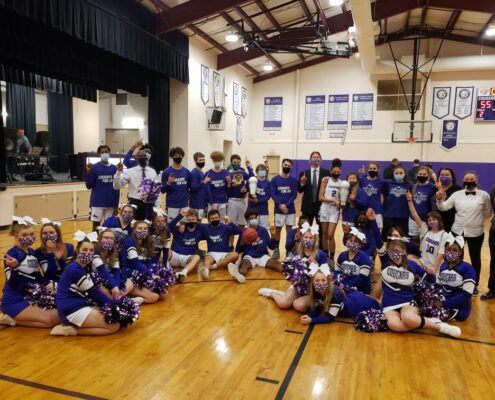 Javier Cremer earned MVP honors. He scored 7 points with 4 rebounds and a steal.

Kyle Kimble led the team with 8 points and 8 boards.

Matthew Placide also snagged down 8 rebounds and put in 4 points.

Daniel Byman connected on two three pointers and finished with 7 points and 2 steals.

Alex Hogg opened the game with a three and dunked twice for 7 points. He added 4 steals and 2 blocks.

Aidan Briggs led the team with 3 assists and also had 4 steals. He put in 5 points.

Blake Lackey pulled down 6 boards and scored a basket.

Only one Cougar did not score and there were eight different guys to make a three pointer; also a school record!