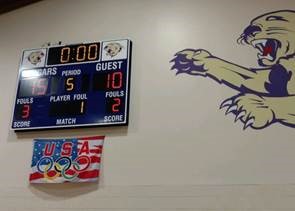 The Lady Cougars met up with the Mill Spring Mustangs at home on Thursday evening. The Cougars were charged up and ready to play after a great practice on Wednesday afternoon.

Set one began slowly for the Cougars. They served well but had difficulty keeping the serve and the game went point for point. Grace Williams had success at setting up co-captain Esther Buckingham for a great hit to the Mustangs mid court. The set was very close but lack of consistency cost them the set, 21 -25.

Set two also began slowly but increased with intensity. The Cougars returned to the court with the same lineup and they started to gel with their communication and coverage. Strings of serves started to show up, Esther and Brandy Michelle Finnell with 3, Bethany Lingle with 4. Shakirah Wazeerud-Din coming off the bench with 4 straight serves. The Cougars continue to run ahead. The team ran their offense successfully as well as made wise plays over the net, dropping balls in open court space. Grace passed very well with smart ball placement in addition to running up 6 serves and Cougars take set two, 25-15.

Set three started off with a bit of drag. The team fought back, and then Bethany turned on the switch with 6 straight serves into the deep back Mustang court. They struggled to return the ball, however, Bethany kept them coming. When the Mustangs did return the ball, the Cougars impressed them with their efforts at court coverage and the ability to keep their heads and hearts in the game.  In addition to strong serving, Emily Daugherty covered the court with great passing and ability to anticipate the play, being in the right spot to help the Cougars. Erin McNeal also passed well in the backcourt and showed off her ability to read many short balls on the net, keeping the Cougars in the lead. Natalia Hoeve jumped in with some great defensive play and passing. Bethany returned to serving and again challenged the Mustangs, pushing them to the edge with another 5 consecutive serves. Cougars take this one, 25-20.

Here we go, set four. Grace kicks off the fun with 7 serves in a row. Shakirah grabbed a great dig in the backcourt and then continued to pass well as she moved into the front row. Co-captain Alecta Feely played a strong game on the net and provided great coverage. She saved a number of balls, keeping the volley alive. The Mustangs started to serve the ball and pushed ahead, taking the lead. They take it, 21-25.

Okay deep breath everyone, set five.  The Lady Cougars now have a real crowd that is cheering, you can feel the excitement in the air. Richie leading the cheer on the microphone, it was awesome! The Mustangs tried to cheer but they were drowned out by the Cougar fans, and their spirit. Now, the Lady Cougars are really ready to go. After a couple back and forths, Esther starts it off with 4 consecutive serves, giving the Cougars a 5 point lead. Erin comes off the bench to serve up 2 more points. Grace drops a well-placed dink over the net. The game is tight but the team holds their heads high, playing their game with heart and fight. Grace makes a great pass to secure the serve. Bethany serves up 4 consecutive serves that the Mustangs struggle to receive. Grace makes a beautiful pass, keeping Bethany up to serve. She then drops the game-winning service point making it 5 in a row and the Cougars celebrate match point, 15-10.

The coaches are so VERY proud of these young ladies and their efforts. They are a team in all senses of the word. They worked hard for this win these past weeks and they fought to stay in this game and finish it. They did just that, great job ladies! They go into the holiday weekend with a 2-1 record in the ACC. Go Cougars!