Dateline – Roswell, Ga. The Lady Cougars approached this afternoon’s game with a boatload of expectations: the final home conference game of the campaign, senior night, and a match against an old conference foe, and by the way, a game with clear playoff implications.  After Lyndon Academy bought TCS back to earth 48 hours before, the AAC world watched to see if the Lady Panthers of AAS would sweep the regular season series, or if TCS would “right the ship” and prevail against last year’s defending champions. 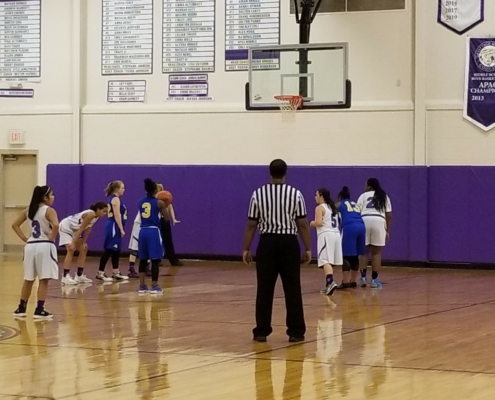 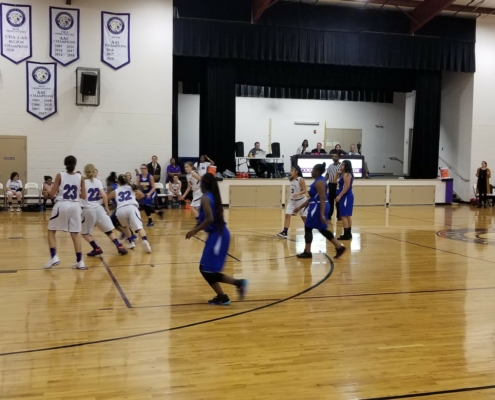 As expected both teams left it all on the floor and played a truly inspired and gritty performance.  What the match may have lacked in subtlety and efficiency, it more than made up for in intensity.  The visitors secured the tip, and wasted no time in lighting up the scoreboard , as All Star Lexi Strothers-Egelston shook loose and laid one home.  As expected, AAS approached the game like a track meet, attempting to force the issue with every defensive rebound, and with every turnover.  The first quarter witnessed mixed success for this strategy, as Strothers-Egelston broke loose for a foul on her drive to the hoop where she converted one of two foul shots.   Junior Alex Nebel promptly retaliated with a shot jumper of her own, only to see Strothers-Egelston match with a hoop of her own.  After about five minutes of game time, the visitors pulled away with a 7 -2 advantage.  TCS broke a press, but failed to convert the layup, granting AAS the opportunity establish more distance put the Lady Cougars down for the count.  Instead of folding up like a cheap lawn chair, Cottage went to work, outscoring the Panthers through the remainder of the quarter to escape with a 9 to 9 tie.   Eighth graders Larissa Brient and Alyssa Briggs chipped in with two shots of their own, while Nebel  received a swing pass and tickled the strings with a three pointer to tie the affiar.  For the visitors, All Star guard  Strothers- Egelston and her sidekick NyaJae Love  combined for their 9.

Frustrated by their inability to score in torrents, the Lady Panthers determined to press their foot on the accelerator.   However, rather than breaking down their foes with firehouse basketball, the Lady Cougars astutely committed to effective transition defense, often forcing bad passes , and consistently thieving outlet passes.  The frantic pace of the game seemed to fatigue both squads, as did the consistently strong team and individual defensive efforts.  During the eight minute second quarter, Carly Ortega accounted for the only AAS points, as she rattled home one short jumper to close out a half court set.  Unfortunately Cottage only retaliated with four points of their own, as Nebel again nailed a three, and Briggs made a free throw.  When the buzzer sounded Cottage escaped with a 13 – 11 lead.

The halftime pow wow allowed the team to regain their legs and to strategize for the half.  The third quarter evidenced the same style of play, albeit with more offensive fireworks. Strothers-Egelston attempted to haul her teammates on her back as she connected on all 10 of her team’s points, hitting two lay-ups in transition, and also draining two three pointers.  Equal to the challenge, Briggs drove with determination, scoring 8 points of her own, while senior Shakirah Wazeerud-Din shook loose underneath to bang home Cottage’s ninth and tenth points of the frame.

As the final eight minutes of the night commenced, players, coaches, and fans crouched to the edge of their seats.  No strangers to fantastic finishes, everyone expected the script to hold to form , and for the game to be settled on the last possession.  Forging a new avenue to victory, Cottage simply wore down their fastbreaking foes, holding them to four points, while breaking out with 13 final frame points of their own.  With 7:40 showing on the clock, all-purpose swingman, and designated bombardier Nebel splashed home yet another trifecta.  A little over a minute later Brient established a little more breathing room when she tricked an opponent into fouling her, and made them pay by knocking home two foul shots.  With 4:46 left in the contest, Briggs finished a contested drive to the hoop to establish a 30 – 23 lead.  Brient later assisted Briggs again to keep the Panthers at bay.  Maria Knezek and Briggs would add the coup de gras with a fastbreak layup and yet another short ranger.  In the last two possessions, TCS opened up a four corners offense to waste clock.  When the buzzer closed out the game, Cottage walked away with a 36 – 25 victory.

What does the victory mean?  By beating the current #1 seed in the conference, TCS now stands in the second place slot.  All three of the top teams: AAS, TCS and Howard School all split with each other.  All of these schools also beat MSA once.  Ironically enough, the only three remaining conference games involve each of these three schools in a final match up against the Lady Ponies of MSA.  If everything holds to form, and each squad defeats MSA, which of course, is hardly guaranteed, all three teams will sport identical 4 and 2 records.  According to the tie breaking formula, The Howard School finishes with a higher point differential against TCS, while TCS finished with a higher point differential against AAS.  That means Howard will claim the top seed, TCS will check in at the third spot, and AAS will drop to third place, with MSA as the fourth seed.  Howard will draw MSA in round one, while TCS will again play AAS.  The winners advance to the championship, and the losing teams will play for third place honors.  This scenario depends on each of the top three teams taking care of business and defeating MSA.  It is too late at night for this writer to imagine the different permutations that could happen if MSA gets an upset or two over these last three games.

Larissa Brient led the bench brigade with highly inspired play.  She ended up playing most of the game in her familiar perimeter role, but she also swung down to the blocks for a stretch in the second quarter.  Brient scored 4 points, passed for 2 assists, grabbed 2 rebounds (1 from each end of the court), to go along with 6 big steals.

Emmi Dillehay and Emma Altermatt spelled Shakirah Wazeerud-Din in the first half to protect her form further foul trouble after the senior center picked up an early second foul.  Altermatt ran the floor effectively, stretching the defense as she caught a pass to help break AAS’s vaunted full court press.  Dillehay pushed bodies around to keep people off the boards, and she recorded an offensive bound of her own.  Natalia Hoeve stepped into the perimeter game when she checked in during the frantic second quarter.

Alex Nebel played a superb and well-rounded game, as evidenced by her 5 defensive boards, impressive transition defense, 1 assist, 1 blocked shot, and two steals.  On the scoring side of the ledger, Nebel again channeled her Dr. Stangelove persona, connecting on three long range three pointers en route to her 11 points.

Freshman Anna Mills did not score on this night, but no one should underestimate her impact on the outcome of the contest.  She hit the boards for 6 rebounds (3 offensive), and pushed the dime around for 3 assists.  She also fought the good fight from the post, and did not hesitate to bust it on transition defense.

On a night when the offense did not come easily, Alyssa Briggs answered the call in a big way, knocking down 14 of her 17 points in the all – important second half.  Briggs matched her All Star rival’s total for the game.  She also collected 3 steals, dished an assist, and contorted her way to 4 rebounds (3 offensive).

The report will close out with documentation of the superlative seniors:

The “Wizard of Waz,” Shakirah Wazeerud-Din overcame early foul trouble to claim a team high 13 rebounds (5 offensive).  Defensively she also jumped out with 3 steals, and 3 blocked shots, and also scored two points on the strength of a third quarter bucket.

Maria “The Thief of Roswell” Knezek again committed larceny with impunity, as she racked up 13 steals.  One of these steals ended with a flourish, as the grab and go helped to seal the contest for her team.  Knezek also gained an assist, and hit the boards hard, escaping with 5 caroms of her own.