The Lady Cougars played the Howard Hawks at the Cougar Center on Wednesday evening. The Cougars were anticipating a tough match after their loss to Howard earlier in the season. They took the court with confidence and control. They grabbed an early lead after 3 serves by Anna Morris. Cougars 5-2. Alyssa Briggs showed off her scrappiness with spot on court coverage, and two digs early on. Celeste Jeoffroy showed passing expertise – using it to pass both to the setter as well as into open spots on the Hawk court. Alyssa has a great play on the net, now tied 8-8. Anna Scalf moved the ball well with some tight low passes into the deep Hawk court. Great passing allowed the team to get three touches on most every volley, effectively running their offense with a designated front row setter. Cougars handled the serve receive well, but lost their momentum. Their serves were in but they struggled to win the rally. Howard takes set one, 16-25.

Lady Cougars take to the court with enthusiasm in set two. They win the first volley, putting Alyssa to serve. She placed 5 great serves that Cougar teamwork backed up. Alyssa is quick to return to court following her serve, picking up a great dig. Cougars up 6 -1. Loss of rally for Cougars. Hawks serve and Cougars are strong on their coverage when the Hawks drop balls into the open court, Celeste slides in get the ball, Cougars win the play, now 7-2. Anna Morris again with well-placed serves for 4 more. With Anna serving, Celeste is back on the net and playing strong, putting pressure on the Hawks. Loss of rally, Hawks serve one but Cougars earn it back. Anna Scalf serving well, hitting the back Hawk court, challenging them to return it, Cougars hold the lead, 13 -5. Volley back and forth but Cougars having a tough time moving to the ball. They let the Hawks gain some speed as #21 has a run of 3 serves, now its 15-10 Cougars still leading. Bit of a struggle with serve receive as Cougars give up their lead, 15-16. TCS is really digging in to fight with each play, as the score is bouncing back and forth. Alyssa to serve, 18-17. Anika Helm makes a smart pass to deep Hawk court, helping to keep the serve in Cougar favor. Alyssa continues to place great shots into the Hawk court, causing them to have trouble returning, loss of rally, score is 21-18. Anika makes another well placed pass to deep court for the point, 22-18. Anna Morris now serving. Alyssa makes a great dig to keep the serve. Another serve by Anna, but team loses the rally, 24-19. Alaina off the bench and has a on point dink to the win the game point for Cougars and set two for TCS, 25-19.

A lot of errors started off the third set for the Cougars. Communication is lacking and this hurts them. They fall behind early on. Teamwork returns and they start picking up balls and digging in the back row. They also realize their ball placement on the Hawk court really does make a difference, and they place smart shots into deep court again. Celeste is playing the net aggressively, putting balls back at Howard that caused them trouble. Olivia Robertson comes up to serve at 4-8. She puts away 6 serves with 2 aces. The team volleys well and to keep Olivia serving. Loss of rally gives the serve back to Howard, TCS breaking down a bit in their serve receive – lack of communication hurting them, 10-12. Anika returns to serve with a deep shot, now it is 13-12. Loss of rally and Cougars struggle to get back the serve. When they get it back, Anna Morris serves three, and Celeste has a great block on the net, winning the point. They give up the serve at 18-21.  The Cougars kept their head in the game, fighting and continuing to cover the court well. Alyssa is all over the court with some great saves. Olivia returns to serve a tough one, backed up by Anna Scalf placing a strong shot to Hawk back court, now 21-23. Cougars are fighting for it all the way but it wasn’t enough, they fall short 21-25 to Hawks.

Set four began with Cougars winning serve receive. Anna Morris serves followed by Celeste setting up Alyssa for a hit to win the point, 2-2. Anna Scalf again has a great dig, and then places the ball to back Howard court. Cougars are making their serves but struggling to win the point. Serve is going back and forth. Celeste serves an ace followed by another one, but they lose the rally, 7-6. At this point, the communication begins to break down. Hawks #21 puts a run of serves to the Lady Cougars. While they are able to get them up, they can’t complete the play to win the point, putting them behind 9-16. They finally earn the serve back and Alyssa serves a tough one but the team can’t earn the point, giving it back to Howard. Then Hawks #14 puts in a string of serves. The Cougars are getting them up but again can’t win the volley. This gives Howard the points they need to finish this set and the match, 10-25.

Proud of the team and their improvement since their last match with Howard. Their ability to run an offense in addition winning a set from Howard was evidence of their efforts. The Lady Cougars will be on the road in the coming weeks with matches against Tapestry Charter on Wednesday, September 22 at 4pm and Thursday, September 23 at AASD at 4:30pm. Go Cougars! 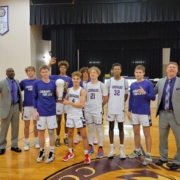