Friday night (1/18/19): The Cottage School Cougars played host to the top AAC seed, Howard Hawks (4-0), looking to put a stop to their three season losing streak. Cottage had a good game plan and held a late lead, but once again the Hawks made a statement that they are still the reigning back to back champions. Howard took advantage of several missed shots in the final frame from TCS, leading to their 46-33 victory.

The Cougars held a 29-26 edge at the end of the third period, and it appeared the contest would end on a final possession as both teams exchanged multiple lead changes throughout. With 5:48 showing on the clock Cottage scored to go ahead 31-30. It would be their last as the Cougars did not score another field goal the rest of the game. Howard connected on a couple of three pointers, transition layups, and three throws to put TCS out of reach; ultimately winning 46-33.

Coach Briggs spoke after the tough loss; “We are close. In four weeks we expect to reach our full potential. What it does is motivate us to work even harder at finding a way. Credit Howard for a good game defensively. We hope to get one more chance at them in the playoffs.” Cottage will go to Mill Springs next Wednesday (1/23) before enjoying Homecoming weekend versus Lyndon Academy on Friday and the Alumni on Saturday.

Parker DeMent had the best game of his career. He pulled down 13 boards to go with 6 points and a blocked shot. 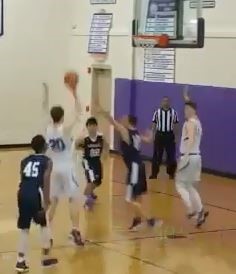 Shane Hendrickson’s stat line won’t show much, but he also had a stellar game.

Tim Mattioli scored a team high 13 points in his second game back from injury. He also added 6 rebounds and 3 steals.

Aidan Briggs would be the first to tell you he was not happy with his performance, but did finish with 8 rebounds, 6 points, and 2 assists.