Dateline Roswell, Ga. – On Friday evening the 2019 edition of the Lady Cougars took to the hardwoods, opening the Cougar Center to the ladies of Johnson Ferry Baptist. The Lady Saints play in the highly competitive Georgia Independent Christian School Association, and prepared to jump start their campaign against Cottage for the second consecutive season.

Both teams set the intense, defensive minded tone for the game from the get go. The Saints forced a turnover on the first TCS possession, but senior Maria Knezek returned the favor seconds later when she picked an opponent’s pocket for the first steal of the season. Nerves, unremitting perimeter pressure, and staunch defensive rebounding conspired to limit each team’s offensive flow. On the strength of a strong inside move, and a couple of mid-range jumpers the Lady Saints ground out 6 first quarter points, while Knezek countered with a breakaway lay-up, and Junior (and GISA State Cross Country finalist) Alex Nebel came off the bench to muscle in a leaner of her own. At the close of quarter one, the visitors nursed a narrow 2 point advantage.

Aficionados of free and easy offense again found themselves disappointed as tight rims and defensive tenacity again set the storyline for the second stanza. The Lady Saints eeked out five points, including a three point field goal, as TCS countered with four hard earned points from around the paint. Senior Shakirah Wazeerud-Din hit a short banker and added a free throw, while eighth grade phenome Alyssa Briggs made the first point of her TCS career. Her free throw came after drawing contact in a scrum underneath the hoop.   As the buzzer sounded signaling the end of the half, The Lady Saints boasted a narrow 11 – 8 lead.

Both teams exited their halftime respite with the same second half agenda, ramp of the defensive pressure. The visitors threw on a full court press, while the home towners extended their defense with some trapping action. Ironically, both teams reacted to the white hot defensive pressure by picking up the offensive execution, as both teams combined for 25 third quarter points. Cottage drew the most immediate dividends as Knezek and Briggs impersonated seasoned pick pockets in Times Square, gathering a bevy of steals, while cashing in on a flurry of fast break buckets. On the strength of Knezek’s 8 and Briggs’ 4 third quarter points, the Lady Cougars tied the match, and then built a narrow lead of their own. Unfortunately, timely shooting by the visitors, and a collapse on the defensive boards allowed the Lady Saints to claw their way back into the lead, escaping the third quarter with the narrowest 22 – 21 advantage.

In the final quarter, foul trouble (both Wazeerud-Din and Knezek ultimately fouled out), continued trouble off the glass, and a truly inspired performance by Saint’s super-sub M. Theiss (who knocked down 7 big points down the stretch) combined to allow the visitors to escape with a 32 – 26 victory. The final frantic 8 minutes hardly felt like a cakewalk for the visitors though. TCS continued to gather steals, Nebel resumed her Dr. Strangelove persona, tickling the net with a three point bomb, and generally ramping up the defensive pressure.

The Lady Cougars and their coaches extend their thanks and appreciation to the families, friends, staff, and students who made the pilgrimage to the Cougar Center for opening night. The energy and enthusiasm made this an especially exciting and memorable game. Your Cougars return to the friendly confines of the Cougar Center Tuesday night against the Lady Warriors of Wilson Academy in a re-match of last season’s memorable photo finish. 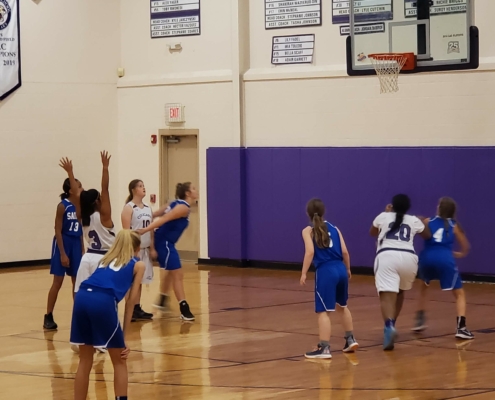 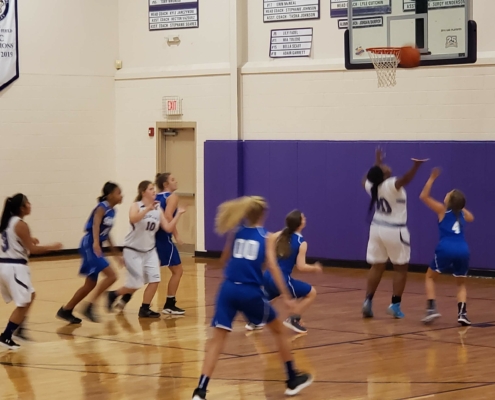 Shakirah Wazeerud-Din, sophomore Tracy Li, and freshman Leighton Braglia all took turns at center duty Friday evening. Although limited in playing time due to foul trouble all game long, Wazeerud-Din stepped up with the game that her team so desperately needed. Leading the way with a game high 13 rebounds (including 3 torn from the offensive glass), Wazeerud-Din also muscled in 4 points, made a steal, and also threw back an eye popping 6 blocked shots, marking her career high. The most emphatic block occurred in the second quarter when a driving Saint underestimated our center’s reach, allowing Shakirah to swat the ball out of her shooting hand with the force of a hydrogen bomb. Nursing an ailing ankle, Tracy Li stepped up to provide her team with a strong inside presence when her counterpart was forced to the bench. Although her stat line may seem sparse (3 rebounds, two offensive), Li prevented the opponent’s frontcourt from feasting in the paint in the absence of the Cougar’s shot blocker. Li smothered post players effectively, consistently forcing them to kick the ball back to the perimeter, or forcing them into off balance and difficult shots. Leighton Braglia made her TCS debut in the first half where she effectively ran the court to keep the Lady Cougars post presence going as the starters needed to re-charge their batteries.

Friday’s game also witnessed a number of Middle School Cougars who made their Cougar Center debut. Eleanor Gaffeystone checked in at the guard spot for her first ever varsity action, while sixth grade counterpart Malia Richards did the same at the close of the third quarter. Both players kept up with the up tempo nature of the contest, providing a tantalizing glimpse of the Cougar Nation’s future. Alyssa Briggs earned the first starting nod for an eighth grade student since Ellie Rappoport pulled the trick in the fall of 2012. Briggs responded with a highly balanced game: tossing in 5 points, hitting the offensive boards 4 times, gathering 2 steals, and handing out 2 assists. Seventh graders (and second year varsity veterans) Finley Love and Hannah Katz also gained first half floor time at the guard spot, where they applied the defensive pressure to the hard charging Lady Saints backcourt. Love tallied 2 rebounds.

The game also marked the first ever appearance for three high school players. Freshman Emma Altermatt earned a starting frontcourt nod. She aided in anchoring the post defense, and hauled in a defensive rebound. Fellow frosh Anna Mills received court time in both the frontcourt and on the perimeter. Although she did not score in this contest, the sharpshooter did force a steal, while gathering 2 rebounds. Sophomore Emmi Rose Dillehay filled the role of sixth man quite well on this night. She hit the boards hard, banging her way to 7 rebounds (3 offensive), while also forcing a steal. Her physical play and hustle allowed her team to better match up with their talented opponents.

High school veterans Natalia Hoeve, Maria Knezek, and Alex Nebel also combined to impact the game. Natalia Hoeve drew her first starting assignment since her frightening injury sustained at Cross Keys last December. Resuming her duties on the perimeter Hoeve continued her ball hawking ways, forcing a steal. Hoeve did not score on the evening but squeezed off a couple of pretty shots. Fresh from her state championship qualifying race less than 24 hours before, Alex Nebel exhibited her flexibility by filling both frontcourt and backcourt positons, as the game situation dictated. Nebel packed an important offensive punch, filling up the nets with 5 points from the bench. Additionally, she grabbed a rebound, blocked a shot, and forced 2 steals. Senior Maria Knezek picked up from where she left off last season, leading her team at both ends of the court. Defensively, the Thief of Roswell stole 11 balls, and hauled down 2 defensive boards. On the offensive side, the explosive guard broke out with a game high 12 points, while also hitting the offensive glass hard for a team high 5 offensive caroms.